Allahabad High Court: A Division Bench of Pritinker Diwaker and Ali Zamin, JJ. dismissed an appeal filed by the accused and held that the trial Judge was justified in convicting the appellants under Sections 302 and 34 of the Penal Code, 1860.

In the present case, the deceased Radhey Shyam Maheshwari was a practicing lawyer and also an active politician. Accused Chob Singh was earlier a block President of Congress party and he was expelled due to his anti-party activities. Since then he had inimical relations with the deceased. When deceased was going to the house of Advocate Rajendra Pal Gupta, the accused Chob Singh apprehended him and accused Dharma Pal and other three other accused attacked him. Dying declaration was also recorded regarding the same. Trial Judge framed charges against the accused-appellants and the deceased accused under Sections 302 and 34 IPC; whereas against accused-appellant, an additional charge was framed under Section 25 of the Arms Act, 1959. During the pendency of the trial, accused Chob Singh expired and the trial court proceeded with the case of remaining three accused persons. The trial Judge convicted the accused on the basis of the dying declaration and statements of two prosecution witnesses. The trial judge convicted the accused-appellant and acquitted Shyam Lal under Section 25 of Arms Act. The present appeal was filed challenging the said order.

Learned counsel for the appellant, Arvind Kumar Srivastava, contended that prosecution witnesses 1 and 2 were not trustworthy, and that language of dying declaration prima facie showed that it was a concocted piece of evidence. He submitted that no one in his dying declaration would say that he is making a statement on oath.

Learned counsel for the State, Amit Sinha, supported the impugned judgment and argued that the statement of the two eye-witnesses were supported by the injury/medical report of the deceased and that the dying declaration of the deceased was fully reliable and trustworthy as the same was duly certified by the Doctor and the recorder of dying declaration i.e. the Executive Magistrate had administered oath to him before the accused died.

Taking cumulative effect of all the facts and evidence it was held that the trial judge was justified in convicting the appellants as the Court found no substance in the argument of the defense that due to his physical condition the deceased was not in a position to make any such dying declaration. Hence, the appeal was dismissed.[Vidya Ram v. State of U.P., 2019 SCC OnLine All 2265, decided on 07-05-2019] 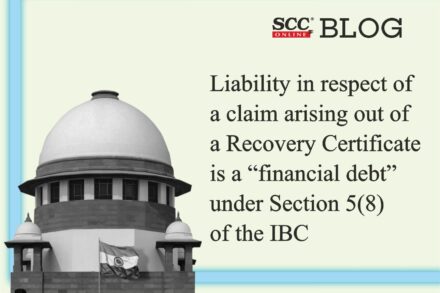 Liability in respect of a claim arising out of a Recovery Certificate is a “financial debt” under  Section 5(8) of the IBC: Supreme Court