Minimal facts relevant for purpose of appreciation are that the petitioner was aggrieved by the impugned order passed by the Governor of U.P. in 2015, which held 50% of pension on the recommendation of the High Court. As a District Judge, he had a duty to conduct the exam for Class III and IV employees with the help of independent committees in 2004. The results of aforementioned exams were challenged by several candidates and the same result was quashed and the petitioner was fined which was, later on, waived off.

Later on, the petitioner was charged for misconduct and foul play. The High Court directed an internal inquiry in the matter and subsequently, he was found guilty and as a punishment, 50% of the petitioner’s pension was withheld.

The learned counsel for the petitioner, Ashok Khare, submitted that an incident which took place 4 years ago cannot be the basis of disciplinary proceedings. Hence, such allegations were not maintainable. He further brought the attention of the Court with regard to holding an inquiry against the recruitment of class IV employees was not sustainable by the sanction of the Governor. He contended that other judicial officers were accused in the same matter and same charges were leveled against them too, but Inquiry Judge submitted a common report where the petitioner was only named guilty whereas all others were exonerated. He vehemently stated that findings recorded by the Inquiry Judge were contrary to the findings returned by the Division Bench on the judicial side and cannot be sustained.

Manish Goyal, learned counsel for the respondent, had defended the punishment order by contending that the sanction of the Governor was not under challenge and that no findings of the Inquiry Judge were in conflict with the findings returned on the judicial side. The disciplinary proceedings were drawn against the petitioner well within time and that if some other officers had gone unpunished, it does not mean that the petitioner is innocent and the punishment inflicted upon him was illegal or discriminatory in nature. The counsel relied upon the law which stated under Section 351-A of Civil Service Regulation, that “the departmental proceedings can be initiated against a retired employee only with the sanction of the Hon’ble Governor and that too only in respect of an incident which had taken place not more than 4 years earlier to the institution of such proceedings.”

The Court opined that, the inquiry which was conducted against the petitioner in respect of charges of misconduct in the recruitment of Class-IV employees was not only barred by limitation but was also without the sanction of the Governor as contemplated under Article 351-A of the CSR. A common inquiry report was submitted against other judicial officers, holding all of them to be guilty. The Court observed that, Inquiry Judge has not differentiated between the role of the petitioner and that of the other judicial officers and had collectively found all of them to be guilty. In view of the above, all the charged officers stood on the same pedestal and were not differently located.

The Court observed the submission of the respondent, that it was not a case of discrimination and the petitioner cannot claim negative equality. “If some other officers have been left unpunished, it is no ground to leave the petitioner also”. Accordingly, the gravity of the misconduct was reduced and the punishment ex-facie was held, excessive and disproportionate to the charge proved. Further it was held, “The petitioner in his capacity as a District Judge or as the Appointing Authority rightly played the role of a supervisor and kept on guiding the officers and on being satisfied that the selection process had been conducted in a fair and a clean manner and that there is no discrepancy or illegality in the preparation of the result approved for its declaration. Therefore, the satisfaction recorded by the District Judge in no way means that he had played some kind of pivotal role in the illegality, if any, committed in the entire recruitment process.” Thus, the punishment was quashed.[Shyam Babu Vaish v. State of U.P., 2019 SCC OnLine All 2215, decided on 22-05-2019] 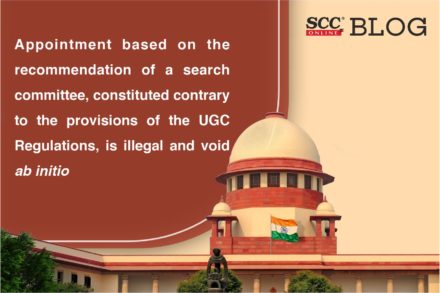 US SC | Church denied relief against the Order issued by the Governor of California, imposing 25% occupancy cap on religious gatherings