As reported by media, Alabama passed a very stringent law that would place a ban on abortion with few exceptions.

The measure contains no exception for rape and incest. The bill now moves to the desk of Alabama’s Republican governor, Kay Ivey.

Following are the provisions relevant for further reading:

“Section 1. This act shall be known as The Alabama Human Life Protection Act.

Section 4. (a) It shall be unlawful for any person to intentionally perform or attempt to perform an abortion except as provided for by sub-section (b).

(b) An abortion shall be permitted if an attending physician licensed in Alabama determines that an abortion is necessary in order to prevent a serious health risk to the unborn child’s mother. Except in the case of a medical emergency as defined herein, the physician’s determination shall be confirmed in writing by a second physician licensed in Alabama. The confirmation shall occur within 180 days after the abortion is completed and shall be prima facie evidence for a permitted abortion.

Section 6. (a) An abortion performed in violation of this act is a Class A felony.

(b) An attempted abortion performed in violation of this act is a Class C felony.” 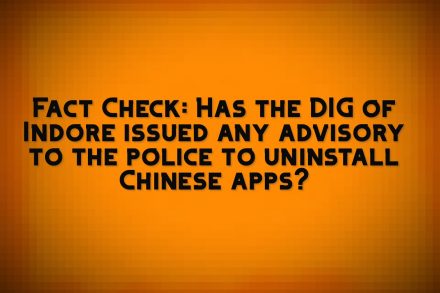 Fact Check: Has the DIG of Indore issued any advisory to the police to uninstall Chinese apps?