Supreme Court: A Bench comprising of A.K. Sikri and Ashok Bhushan, JJ. dismissed an appeal filed against the judgment of the Division Bench of the Madras High Court whereby it held it had no jurisdiction to adjudicate the dispute in question.

In short, the real essence of the dispute was that the plaintiffs, resident nationals of Dubai, had filed a derivative action on behalf of a company incorporated in Dubai. They held 34% shareholding in the said company, whereas the defendants held 66% of the shares. The defendants also held around 6.16% shares in Star Health and Allied Insurance Co. Ltd., a company incorporated in Chennai, India. According to the plaintiffs, these shares actually belonged to the company registered in Dubai mentioned above. Since Star Health was incorporated in Chennai, the plaintiffs instituted a suit in Madras High Court to protect an declare the beneficial interest of the Dubai company in the said 6.16% shares. A Single Judge of the High Court admitted the suit; however, on appeal by the defendants, the Division Bench held that it had no territorial jurisdiction to adjudicate in the matter. Aggrieved thus, the plaintiffs filed the instant appeal.

On perusal of the facts, the Supreme Court noted that the plaintiffs made certain averments to the said Dubai Company being the real owners of the shares held by the defendants in the Indian Company, which was denied by the defendants. In reality, it was a dispute between the plaintiffs and defendants, all of who were residents of Dubai. Even the company whose beneficial interest was claimed was incorporated in Dubai. The Court held inter alia, that merely because the dispute is about shares issued by an Indian Company would not lead to the conclusion that cause of action has arisen in India. As a consequence, the Madras High Court has no territorial jurisdiction to adjudicate the matter. Accordingly, the judgment impugned was upheld and the appeal was dismissed. [Ahmed Abdulla Ahmed Al Ghurair v. Star Health and Allied Insurance Company Ltd.,2018 SCC OnLine SC 2554, decided on 26-11-2018] 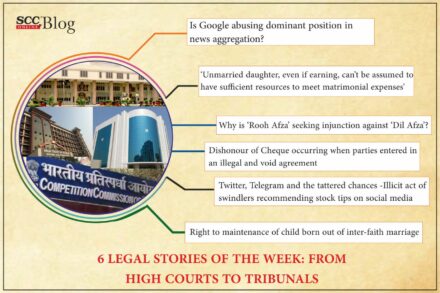 6 Legal Stories of the Week: From High Courts to Tribunals