“When the parties live together as husband and wife, there is presumption that they are legally married couple for claim of maintenance of wife under Section 125 CrPC.”

Supreme Court: The Bench comprising of R. Banumathi and Indira Banerjee, JJ., while setting aside the impugned judgment of the High Court of Karnataka and allowing the present appeal stated that “proceedings under Section 125 CrPC do not require strict standard proof of marriage.”

In the present case, the appellant had filed the present appeal against the judgment of Karnataka High Court which has set aside the family court’s decision of paying maintenance. The facts and submissions of the appellant were that the Appellant 1 had two children from wedlock between Appellant 1 and respondent. Further, while the marriage of Appellant 1 and respondent was subsisting, the respondent got married to one of his colleagues and started harassing and neglecting the appellants. Due to the stated reasons, Appellant 1 filed a police complaint after which the respondent was asked to pay Rs 3000 as maintenance. Appellant on not being able to maintain herself and her two children filed a criminal miscellaneous application under Section 125 CrPC for maintenance.

Respondent, in his submission, submitted of never being married to Appellant 1 and contended as there was no valid marriage, petition for maintenance was not maintainable. High Court had set aside the order of the family court and held that Appellant 1 was unable to prove she was the legally wedded wife of the respondent. Aggrieved by the same, the appellants approached the Supreme Court.

The Apex Court on a careful consideration of the submissions and impugned judgment along with the material placed on record and placing reliance on Dwarika Prasad Satpathy v. Bidyut Prava Dixit, (1999) 7 SCC 675, stated that:

“Unlike matrimonial proceedings where strict proof of marriage is essential, in the proceedings under Section 125 CrPC, such strict standard proof is not necessary as it is summary in nature meant to prevent vagrancy.”

Therefore, the Supreme Court stated that family court on the basis of documentary and oral evidence held rightly in favour of the appellant and High Court being the revisional court had no power of reassessing the evidence and substitute its views on findings of facts. Hence, the impugned judgment of the High Court was set aside and the present appeal was allowed with a liberty given to the appellants to approach the family court for further enhancement of maintenance if required. [Kamala v. M.R. Mohan Kumar,2018 SCC OnLine SC 2121, decided on 24-10-2018] 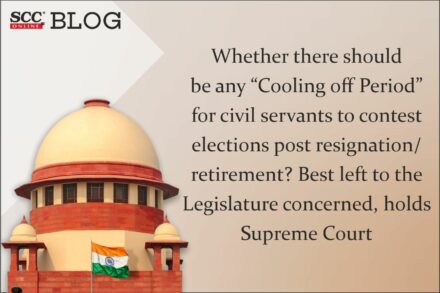 Whether there should be any “Cooling off Period” for civil servants to contest elections post resignation/retirement? Best left to the Legislature concerned, says Supreme Court