The main issue for consideration, in this case, was whether the respondent authorities were justified in rejecting petitioner’s claim on the ground that compassionate appointment cannot be granted in cases of deemed death.

The Court observed that there is no distinction between civil death or deemed death and natural death. The Court referred to its own decisions including Bijay Kumar Pradhan v. State of Jharkhand, 2013 SCC OnLine Jhar 1417 and Sunil Kumar v. State of Jharkhand, 2015 SCC OnLine Jhar 2308. In both these cases the Court had held that there is no difference between civil and natural death, hence compassionate appointment cannot be denied in cases of civil death.

The Court held that as per Section 108 of the Indian Evidence Act, 1872 “if a person has not been heard of for 7 years by those who could naturally have heard of him if he has been alive, then the burden of proof that he is alive is shifted on the person who affirms it.” In this case, the petitioner and her mother successfully proved that they have not heard of the petitioner’s father for more than last 7 years and the respondents have themselves admitted that petitioner’s father has met with civil death. On these grounds the Court allowed the petition and quashed the order of respondent authorities, directing them to consider petitioner for compassionate appointment.[Praveen Kumar Singh v. State of Jharkhand,2018 SCC OnLine Jhar 753, Order dated 25-07-2018]

Jha HC | Permission for Rath Yatra Puja in the month of July in Jharkhand sought; Directed to take its own decision in view of SC ruling 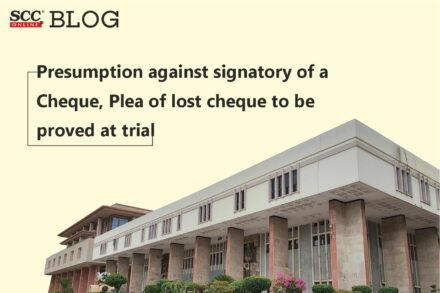 Presumption against signatory of a Cheque, Plea of lost cheque to be proved at trial: Del HC refuse quashing of summoning order for S. 138 NI Act offence