Chhattisgarh High Court: Conviction of the accused under Section 304-B of IPC was set aside by a Single Judge Bench comprising of Arvind Singh Chandel, J., on the ground that the facts did not show that cruelty or harassment was meted out to the deceased wife ‘soon before her death’.
The accused was convicted by the trial court under Section 304-B. The allegation against him was that he threatened her wife- the deceased, to bring Rupees Ten thousand from her maternal home and harassed her to the extent that she committed suicide. The conviction of the accused was based on the statements of the mother and the sister of the deceased.
The High Court considered the evidence on record and submissions made on behalf of the parties and found that there were material discrepancies in the witness’ statements. The sister of the deceased stated that she lived with the deceased in their maternal home for about one and a half month and there also the accused came and poured kerosene on the deceased. However, it was found that the alleged incidents of fights and quarrels related to domestic issues and not to demand of dowry. Further, the incident alleged by the sister of the deceased happened about six months before her death. The Court perused Section 304-B and held that in the facts and circumstances of the case, it could not be said that cruelty or harassment was meted out to the deceased ‘soon before her death’. Therefore, the Court was of the view that the order of conviction of the accused was liable to be quashed.
The appeal was allowed and the order the trial court convicting and sentencing the accused under Section 304-B IPC was set aside. [Binda Prasad v. State of M.P. (Now Chhattisgarh),  2018 SCC OnLine Chh 380,  order dated 04-04-2018] 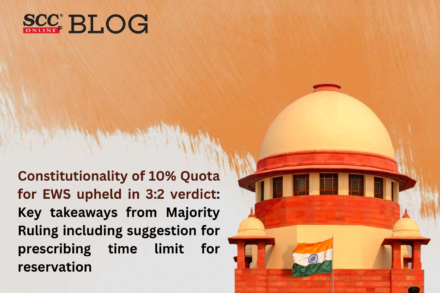 Constitutionality of 10% Quota for EWS upheld in 3:2 verdict: Key takeaways from Majority Ruling including suggestion for prescribing time limit for reservation