National Green Tribunal, Principal Bench: In the wake of smog engulfing the NCR for days, posing a serious environmental hazard, the NGT banned all construction work in the area till the next date of hearing. The Tribunal stated that the right to decent and clean environment is a fundamental right under Article 21 of the Constitution of India and that Article 48-A read with Article 21 mandates the State to protect the environment and Article 51-A(g) imposes a fundamental duty upon the citizens to protect the environment.

The Tribunal pointed towards it’s directions in Vardhman Kaushik v. Union of India, 2016 SCC OnLine NGT 4176, on 10.11.2016 stating that the steps that were required to be taken in long and short term remained unexecuted and non-complied with. Failing to find a single plausible explanation as to why the directions in the aforesaid order were not complied with, the Tribunal clearly stated that fundamental rights, particularly the ones which relate to right to life cannot be subjected to economic limitation.

Resultantly, the Tribunal, in an attempt to alleviate the harmful effects of smog and pollution, banned all construction activity in the entire NCR region till the next date of hearing. The Tribunal added that labourers shall not be denied their daily wages. Further, all industrial activities which release emission were also prohibited till the next date of hearing. Further, all the Corporations dealing in health, environment and development were directed to constitute teams to visit different areas under their jurisdiction to check burning of waste or any material in any part of NCR. [Vardhaman Kaushik v. Union of India, 2017 SCC OnLine NGT 7584, order dated 09.11.2017]

SC elaborates on the scheme of determining additional purchase price under Clause 5A under Sugarcane Control Order, 1966 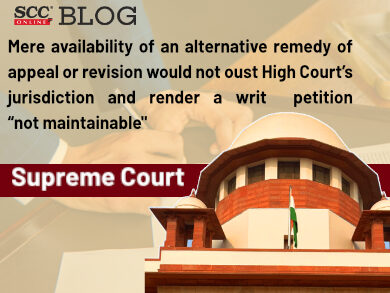 Mere availability of an alternative remedy of appeal or revision would not oust High Court’s jurisdiction and render a writ petition “not maintainable”: Supreme Court