Bombay High Court: A Division Bench  comprising of S.C. Dharmadhikari and Prakash D. Naik JJ, denied a request for recusal during hearing of an income tax appeal along with a criminal writ petition for want of any substantial reason. The Court, while hearing the submission of the respondent for recusal took note of the growing trend among litigants to request recusal of judges.

The respondent submitted that one of the Hon’ble Judges inspires no faith towards his impartiality. The Bench after patiently hearing and recording statements made by the respondent, relied upon Subrata Roy Sahara v. Union of India, (2014) 8 SCC 470, wherein, then JS Khehar, J had upheld the Delhi High Court’s view that a party cannot insist on a judge recusing himself. Further, relying on Supreme Court Advocates-on-Record v. Union of India, (1993) 4 SCC 441, the court observed that a request for recusal must never be acceded to, unless justified. The Bench noted that when a Judge takes an oath of office, prescribed by the Constitution, implicit in that is there is no ill will, much less any enmity and when a judge is supposed to decide a case impartially, he has to be strict.

Upon careful analysis, the Court found that this was not the first time the respondent had made a request for recusal as he had filed a request for recusal to members of the ITAT in the earlier instance which dragged the proceedings endlessly. The Court condemned acts aimed at obstructing justice such as ‘Bench avoiding’ firmly. The Court also noted that the respondent did not put forward any statement which substantiates his claim that there is a reasonable apprehension of bias and prejudice. While denying the request, in order to accommodate the respondent, the Court listed the next hearing on 09.10.2017. [Commissioner of Income Tax – 24 v. Shri M.H Patel, Income Tax Appeal No. 584 of 2014, decided on 06.09.2017] 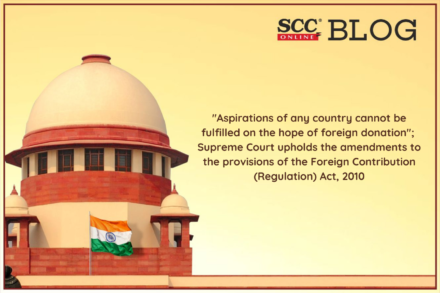 “Aspirations of any country cannot be fulfilled on the hope of foreign donation”; Read why SC upheld the amendments to the provisions of the Foreign Contribution (Regulation) Act, 2010

‘Arbitration Agreement is a separate agreement distinct from the main contract’; Delhi High Court refers the parties to arbitration under a ‘Non-Binding Term Sheet’