Constitution of India — Art. 21 — Death of farmers in Tamil Nadu: Directions issued regarding two aspects: (1) Availability of awareness of Minimum Support Price (MSP) and (2) Establishment of mandis within acceptable radius of holdings and for opening of procurement centres on time. [T.N. Centre for Public Interest Litigation v. State of T.N., (2017) 7 SCC 652]

Criminal Procedure Code, 1973 — Ss. 172(2) and (3) — Right of accused to cross-examine police officer with reference to entries in police diary: Right of accused to cross-examine police officer with reference to entries in police diary, is very much limited in extent and even that limited scope arises only when court uses such entries to contradict police officer or when police officer uses it for refreshing his memory and that again is subject to provisions of Ss. 145 and 161, Evidence Act. Thus, a witness may be cross-examined as to his previous statements made by him as contemplated under S. 145, Evidence Act, if such previous statements are brought on record, in accordance with law, before court and if contingencies as contemplated under S. 172(3) CrPC are fulfilled. S. 145, Evidence Act does not either extend or control provisions of S. 172 CrPC. There is no scope in S. 172 CrPC to enable court, prosecution or accused to use police diary for purpose of contradicting any witness other than police officer, who made it. Denial of right to accused to inspect case diary cannot be characterised as unreasonable or arbitrary. Confidentiality is always kept in the matter of investigation and it is not desirable to make available the police diary to accused on his demand. [Balakram v. State of Uttarakhand, (2017) 7 SCC 668]

Education and Universities — Medical and Dental Colleges — Reservation of seats/Quota/Exemption/Priority in Medical/Dental Institutions — Criteria for reservation — Institutional reservation: In Central universities like AMU and BHU or other Central institutions like All-India Institute of Medical Sciences, etc., there is no State quota and seats have to be filled up on basis of merit but 50% reservation in PG seats is permissible for MBBS students of respective institutions only, as per decision of Constitution Bench in Saurabh Chaudri v. Union of India, (2003) 11 SCC 146. High Court, thus, erred in setting aside institutional preference in AMU and BHU. Further, High Court overstepped its jurisdiction and went beyond scope of writ petition while issuing direction relating to AMU and BHU. As issue was admittedly not raised by appellant-petitioners, High Court order and all consequential actions taken by State Government, reversed in this respect. Time for admission only in respect of said seats extended up to 12-6-2017. [Saurabh Dwivedi v. Union of India, (2017) 7 SCC 626]

Human and Civil Rights — Children’s Rights — Generally — PIL initially raising issue of sex abuse of children in orphanages and government schools: A broader and purposeful interpretation to definition of “child in need of care and protection” in S. 14(2), Juvenile Justice (Care and Protection of Children) Act, 2015, given. Said definition in addition to child in conflict with law must also include victims of sexual abuse/assault/harassment under Protection of Children from Sexual Offences Act, 2012 (POCSO) Act as also victims of child trafficking. Said definition is illustrative and benefits envisaged for children in need of care and protection should be extended to all such children in fact requiring State care and protection. Such children must also be given protection under Juvenile Justice (Care and Protection of Children) Act, 2015 being victims of crime under the POCSO Act and the Immoral Traffic (Prevention) Act, 1956. [Exploitation of Children in, In Re, (2017) 7 SCC 578]

Income Tax Act, 1961 — S. 40(a)(i-a) r/w Ss. 194-C, 200 & 201 — Scope of — Deduction claimed from income chargeable under the head “Profits and gains of business or profession”, on account of amounts paid to sub-contractor towards freight allowance — Disallowance of, when assessee fails to deduct tax on such amounts paid at source: On analysing the scheme of obligation to deduct the tax at source and paying it over to the Central Government under Ss. 194-C, 200 & 201, held that it could not be said that the word “payable” occurring in S. 40(a)(i-a) referred to only those cases where the amount was yet to be paid and did not cover the cases where the amount was actually paid. Therefore, S. 40(a)(i-a) covered not only those cases where the amount is payable but also when it is paid. Thus, amount paid without deduction of TDS, is not allowable as deduction. [Palam Gas Service v. CIT, (2017) 7 SCC 613] 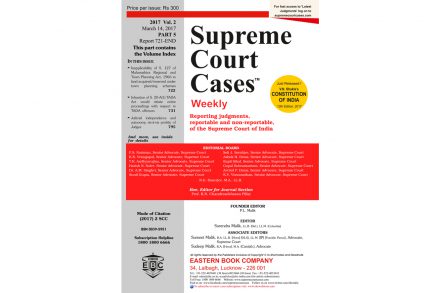