Supreme Court: In the writ petition filed by Amar Singh where he asked the Court to declare that Para 2 of the 10th Schedule to the Constitution does not apply to an elected member of a House who has been expelled by his/her political party, the Bench of Dipak Misra and A.M. Khanwilkar, JJ placed the matter before the Chief Justice of India for constitution of a larger Bench. Amar Singh, having been expelled by the Samajwadi Party, had sought for a direction that his conduct would no longer fall within the acts that constitute a disqualification within the meaning of para 2(1)(a) and para 2(1)(b) of the Tenth Schedule to the Constitution. The larger Bench will be deciding the question as to the status in either House of Parliament or the State Legislatures of a Member who is expelled from the party which set him/ her up as a candidate for election.

Para 2 of the 10th Schedule to the Constitution provides for disqualification on ground of defection but does not specifically mention the expelled members, Hence, an important question had came before the Court in Amar Singh v. Union of India, (2011) 1 SCC 210,  for consideration as to whether the members who are expelled from the membership of the parties which had set them up as candidates in the election, must be deemed to continue to belong to such party in view of Explanation (a) to paragraph 2(1) of the 10th Schedule. Also, when a Member of either House of Parliament is expelled by the party which had set him up as a candidate for election and he either joins another political party or forms his own party, can it be said that he had voluntarily given up his membership of the party in view of the legal fiction created by Explanation (a) to paragraph 2 (1) of the Tenth Schedule. The bench in that case had referred the case to a larger bench and the consequently, the larger bench had kept the questions open for decision in an appropriate case.

Earlier, in G. Viswanathan v. Tamil Nadu Legislative Assembly, (1996) 2 SCC 353, the Court had held that even if such a member is thrown out or expelled from the party, for the purposes of the Tenth Schedule he will not cease to be a member of the political party that had set him up as a candidate for the election. He will continue to belong to that political party even if he is treated as `unattached’. [Amar Singh v. Union of India, 2017 SCC OnLine SC 405, order dated 17.04.2017]

“And Then There Were None”: Agatha Christie’s most famous work in Del HC for trademark registration | Succinct Report 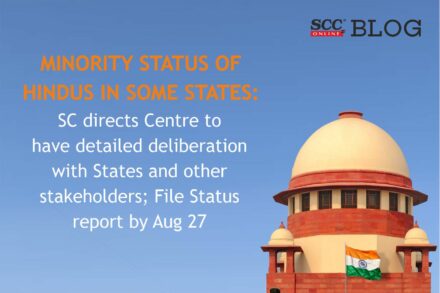 Minority Status of Hindus in some States: SC directs Centre to have detailed deliberation with States and other stakeholders; File Status report by Aug 27