Supreme Court: Considering the rulings in the judgments of this Court in Anil Kumar v. M.K. Aiyappa, (2013) 10 SCC 705 and Manharibhai Muljibhai Kakadia v. Shaileshbhai Mohanbhai Patel, (2012) 10 SCC 517, the Court held that an order directing further investigation under Section 156(3) of the Cr.P.C. cannot be passed in relation to public servant in the absence of valid sanction.

In the aforementioned judgments, it was held that Sub-section (3) of Section 19 of Prevention of Corruption Act, 1947 has an object to achieve, which applies in circumstances where a Special Judge has already rendered a finding, sentence or order. In such an event, it shall not be reversed or altered by a court in appeal, confirmation or revision on the ground of absence of sanction, however, does not mean that the requirement to obtain sanction is not a mandatory requirement.

Another question that came before the bench of Dr. A.K. Sikri and N.V. Ramana, JJ for examining was whether a public servant who is not on the same post and is transferred, whether by way of promotion or otherwise to another post, loses the protection under Section 19(1) of the P.C. Act, though he continues to be a public servant, albeit on a different post? Answering the question in affirmative, the Court held that where the public servant had abused the office which he held in the check period but had ceased to hold “that office” or was holding a different office, then a sanction would not be necessary. Where the alleged misconduct is in some different capacity than the one which is held at the time of taking cognizance, there will be no necessity to take the sanction. [L. Narayana Swamy v. State of Karnataka, 2016 SCC OnLine SC 908,  decided on 06.09.2016]

Govt must reserve posts for promotions for persons with disabilities even under 1995 PwD Act; explore other methods to avoid stagnation: Supreme Court 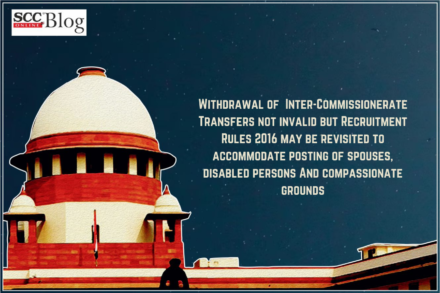 Repudiation of claim of a vehicle on the ground that the vehicle was not duly registered, proper