Madras High Court: While deciding the question that in a scenario where the marriage is proved but held to be illegal, whether the wife can claim the benefits of family pension, the Court observed that a long cohabitation would draw the presumption of marriage and on that score the deemed wife would be entitled to receive the pension benefits as claimed for.

The second appeal arose from the situation where after the demise of the husband, the petitioner via her counsel Mr M.P.Senthil claimed for the family pension as the nominee, but was refused by the appellate Court on the ground that her marriage to the deceased was illegal as there were no records of the dissolution of deceased’s first marriage. The respondent’s counsel Mr K.K.Senthilvelan argued that deceased’s first marriage did not dissolve in the court hence the petitioner’s marriage is illegal thus rendering her ineligible to claim family pension. The counsel for the petitioner presented documents ascertaining the existence of the marriage in question.

The Court relying upon Andrahennedige Dinohamy v. Wijetunge Liyanapatabendige Balahamy, AIR 1927 PC 185 and Mohabbat Ali v. Khan Muhammad Ibrahim Khan, AIR 1929 PC 135, observed that the law presumes in favour of marriage and against concubinage when a man and a woman have cohabited continuously for a number of years. The Court also observed that the concept of marriage to constitute the relationship of husband and wife may require strict interpretation whereas the claims for civil rights, right to property etc., may follow a liberal approach, thus a financially dependent woman cannot be denied the benefits. S. Muthulakshmi v. The Record Officer,Madras Regiment, Second Appeal (MD) No.1068 of 2009, decided on 24.06.2014.

To read the full judgment, refer to SCCOnLine 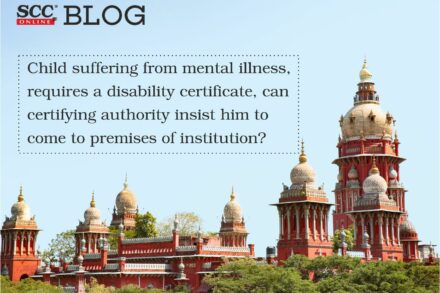 Child suffering from mental illness, requires a disability certificate, can certifying authority insist him to come to premises of institution? Madras HC analyses