Supreme Court: While setting aside the earlier convictions by Special Court (POTA) (2006) and High Court of Gujarat (2010), by its power under Art. 136 of the Constitution, the bench comprising of Gopala Gowda and A.K. Patnaik, JJ acquitted all six accused of all charges framed against them, in the 2002 Terror-Attack on Akshardham Temple, Gandhinagar (Gujarat) and ordered the release of persons in custody in this regard. The Court after allowing the appeal of the two accused, punished with life-imprisonment for charges under IPC and POTA, held that the earlier judgments were erroneous in both, fact and law, due to non-application of mind and also condemned the incompetence of investigating agencies which caused the conviction and subsequent sentencing of innocent persons. Adambhai Sulemanbhai Ajmeri v. State of Gujarat; (Crl) Appeal No. 45 of 2011; Decided on May 16, 2014 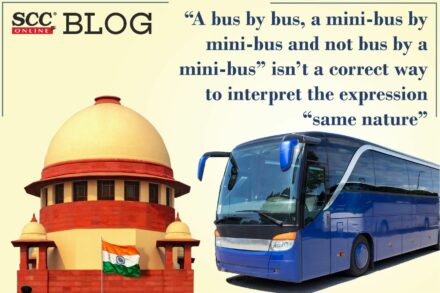 “A bus by bus, a mini-bus by mini-bus and not bus by a mini-bus” isn’t a correct way to interpret the expression “same nature”: Supreme Court

Pre-Primary education is an essential right of a child

Contract of affiliation for commercial purposes can be perpetual as well as unilateral in nature: SC of Canada