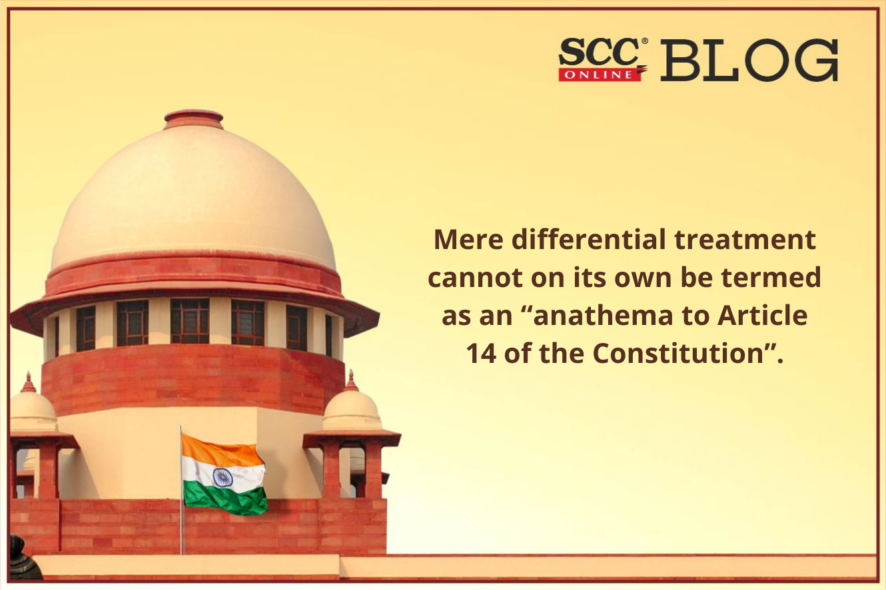 Supreme Court: The bench of Sanjay Kishan Kaul and MM Sundresh*, JJ has held that when there is a reasonable basis for a classification adopted by taking note of the exigencies and diverse situations, the Court is not expected to insist on absolute equality by taking a rigid and pedantic view as against a pragmatic one.

Such a discrimination would not be termed as arbitrary as the object of the classification itself is meant for providing benefits to an identified group of persons who form a class of their own. When the differentiation is clearly distinguishable with adequate demarcation duly identified, the object of Article 14 gets satisfied.

Social, revenue and economic considerations are certainly permissible parameters in classifying a particular group. Thus, a valid classification is nothing but a valid discrimination. That being the position, there can never be an injury to the concept of equality enshrined under the Constitution, not being an inflexible doctrine.

The question as to whether a classification is reasonable or not is to be answered on the touchstone of a reasonable, common man’s approach, keeping in mind the avowed object behind it. If the right to equality is to be termed as a genus, a right to non-discrimination becomes a specie. When two identified groups are not equal, certainly they cannot be treated as a homogeneous group. A reasonable classification thus certainly would not injure the equality enshrined under Article 14 when there exists an intelligible differentia between two groups having a rational relation to the object.

An interference would only be called for on the court being convinced that the classification causes inequality among similarly placed persons. The role of the court being restrictive, generally, the task is best left to the concerned authorities. When a classification is made on the recommendation made by a body of experts constituted for the purpose, courts will have to be more wary of entering into the said arena as its interference would amount to substituting its views, a process which is best avoided.

As long as the classification does not smack of inherent arbitrariness and conforms to justice and fair play, there may not be any reason to interfere with it. It is the wisdom of the other wings which is required to be respected except when a classification is bordering on arbitrariness, artificial difference and itself being discriminatory. A decision made sans the aforesaid situation cannot be tested with either a suspicious or a microscopic eye. Good-faith and intention are to be presumed unless the contrary exists. One has to keep in mind that the role of the court is on the illegality involved as against the governance.

A larger latitude in dealing with a challenge to the classification is mandated on the part of the Court when introduced either by the Legislature or the Executive as the case may be. There is no way, courts could act like appellate authorities especially when a classification is introduced by way of a policy decision clearly identifying the group of beneficiaries by analysing the relevant materials.

Tri HC | Delayed payment of die-in-harness compensation, paid as an alternative to compassionate appointment, ordered to be paid with interest

HP HC | Whether a daughter upon marriage ceases to be a part of the family for the purpose of seeking compassionate appointment against her deceased father; HC elucidates