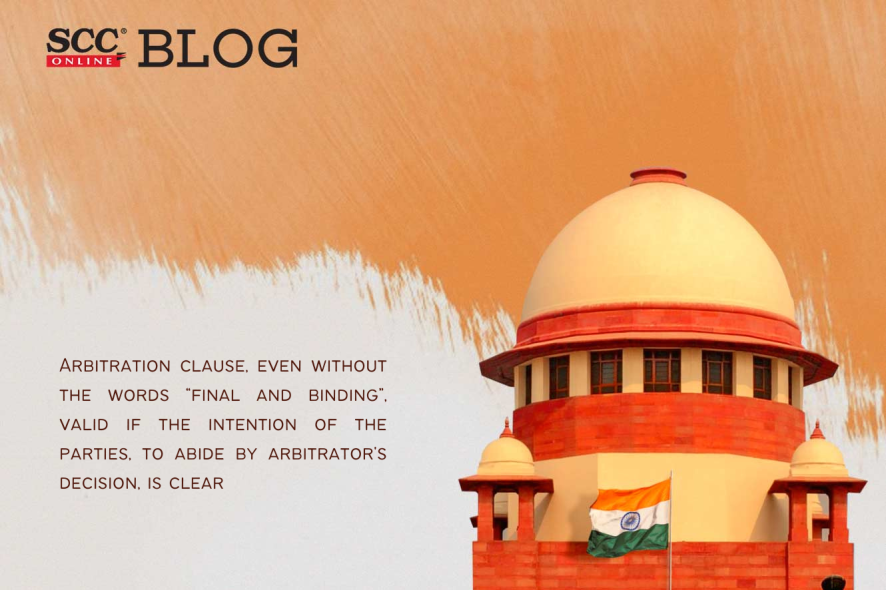 The Court was deciding the case relating to a Development Agreement. When a dispute arose between the parties, the Appellant invoked the arbitration clause. Though the notice was duly served, the Respondents failed to respond to it, leading to the Appellant filing an application under Section 11 of the Arbitration and Conciliation Act, 1996 before the Bombay High Court.

However, the Respondents contended that the contract lacked the express wording, like “the parties agreeing in writing to be bound by the decision of an arbitral tribunal, necessary for it to be considered a valid and binding agreement to refer the disputes to arbitration.

The High Court agreed with the Respondent and held that the Appellant’s application under section 11 was not maintainable for want of a valid arbitration clause.

Disagreeing with the observation of the High Court, the Supreme Court held that the deficiency of words in agreement which otherwise fortifies the intention of the parties to arbitrate their disputes, cannot legitimise the annulment of arbitration clause.

The Court noticed that the subject-clause, in the case at hand, luminously discloses the intention and obligation of the parties to be bound by the decision of the tribunal, even though the words “final and binding” are not expressly incorporated therein. Going through the other parts of the arbitration agreement, the Court noticed that the intention of the parties was surely to refer the disputes to arbitration. Hence, in the absence of specific exclusion of any of the attributes of an arbitration agreement, the Respondents’ plea of non- existence of a valid arbitration clause, is seemingly an afterthought.

“Even if we were to assume that the subject-clause lacks certain essential characteristics of arbitration like “final and binding” nature of the award, the parties have evinced clear intention to refer the dispute to arbitration and abide by the decision of the tribunal. The party autonomy to this effect, therefore, deserves to be protected.”

The Court stressed on the fact that UNCITRAL Model Law on International Commercial Arbitration, 1985 from which the Arbitration and Conciliation Act, 1996 originated, envisages minimal supervisory role by courts. When Section 7 or any other provisions of the Act do not stipulate any particular form or requirements, it would not be appropriate for a court to gratuitously add impediments and desist from upholding the validity of an arbitration agreement.

It was, hence, observed that it is imperative upon the courts to give greater emphasis to the substance of the clause, predicated upon the evident intent and objectives of the parties to choose a specific form of dispute resolution to manage conflicts between them. The intention of the parties that flows from the substance of the Agreement to resolve their dispute by arbitration are to be given due weightage.