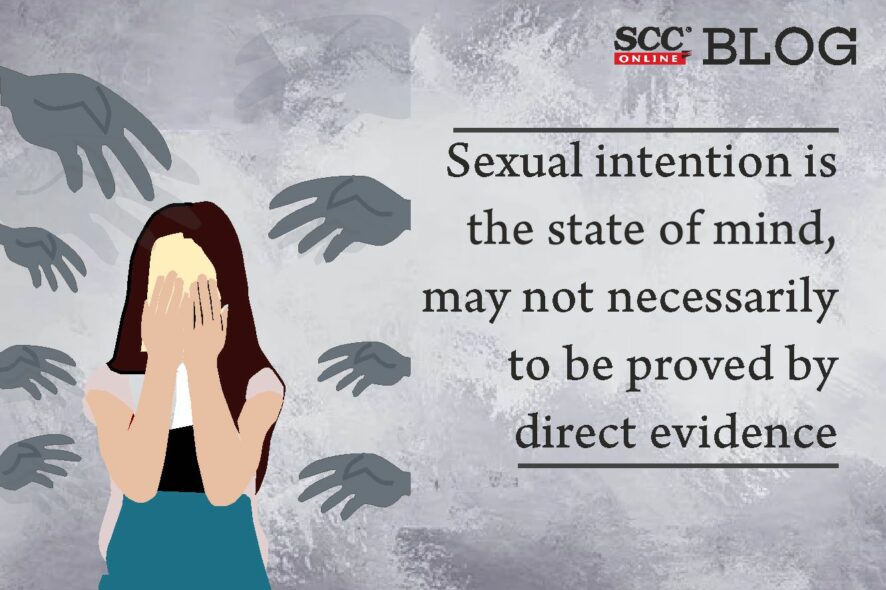 Special Court for Protection of Children from Sexual Offences Act, 2012, Fort, Greater Bombay: Expressing that, the sexual intention is the state of mind, may not necessarily to be proved by direct evidence, such intention is to be inferred from attending circumstances of the case, M.A. Baraliya, Designated Judge under POCSO Act, 2012, held that touching bum of a girl cannot be said to be without sexual intention.

Accused was facing trial for committing offences punishable under Sections 354 and 354-A of the Penal Code, 1860 and under Section 10 of the Protection of Children from Sexual Offences Act, 2012.

The prosecution case was that the minor girl was aged 10 years old and had gone to buy the bread to a nearby shop. While returning, she noticed that 4 boys were laughing at her, later when she was going towards the Jain Temple with her friend, the boys were still there and one of them came near her and touched her private part and all of the boys started laughing at her.

All of the above was explained by the minor to her father and mother, after which a crime was registered. Hence the accused was arrested.

Charges were farmed for the offences punishable under Sections 354 and 354-A of IPC and under Section 10 of POCSO Act, 2012.

Court noted that the victim (PW-3) and her father consistently deposed that the accused touched her private part.

Bench expressed that the “term private part is to be interpreted into the context what is meant by it in our society. Google might not be interpreting bums as private part as submitted by the Advocate for the accused, but it is not acceptable interpretation as far as we Indians are concerned.”

Sexual Assault under Section 7 of the POCSO Act says that:

In the present matter, the accused had not touched either vagina, breast or anus of the girl, but touched her bums. The touching, as stated under the above-said Section, if is to the other organs, those categorised, then it must be with sexual intention.

Hence, touching the bum of the girl cannot be said to be without sexual intention.

The Court found that the past conduct of the accused of laughing at her and then touching her manifests that it was all with sexual intention, to grab the chance.

It was added that merely for the reason that there were no eyewitnesses to the incident and that the friend who was with the prosecutrix had not been examined, cannot be the reason to discard and disregard the testimony of the victim girl.

Accused by touching or patting on her, bums, has committed the act with full knowledge and intention to outrage her modesty and to assault her sexually.

Long back in the case famously known as butt slapping case, the accused Kanwarpal Singh Gill the then Director General of Police was convicted, for slapping on the posterior of the prosecutrix an I.A.S. Officer, by the trial court, to have committed the offence of outraging modesty under section 354 and 509 IPC and was also sentenced, for imprisonment and fine.

In the present matter also, the victim was aged 10 years old on the date of the incident, provision of POCSO Act attracts for similar kind of this act touching the posterior of the victim. Hence, the prosecution succeeded in proving that the accused had committed the said act with sexual intention and outraged her modesty.

SPP submitted that such instances of inappropriately touching the girls on a road are on high. Hence imposing the maximum sentence, will give a message to society.

Considering the age factor of the accused along with the nature of the crime, gravity of offence and that he comes from a poor family a minimum sentence of 5 years with fine as provided under Section 10 POCSO Act was ordered. [State of Maharashtra v. Sahar Ali Shaikh, POCSO Special Case No. 519 of 2017, decided on 12-2-2021]

Delhi High Court: Anu Malhotra, J., while upholding the decision of the trial court in a case where a 10-year-old minor was sexually assaulted, issued directions for the Jail Superintendent to consider an appropriate programme for the appellant ensuring the following:

In the present case, appellant assailed the impugned judgment and order through which the appellant was charged for offences punishable under Section 10 of POCSO Act and Section 367 of Penal Code, 1860.

Appellant had allegedly kidnapped the victim who was aged 10 years in order that he may subject him to unnatural lust or knowing it to be likely that he would be so subjected to unnatural lust and had thereby committed an offence punishable under Section 376 of IPC.

It has been stated that appellant forcibly put off the trouser of the victim and also removed his trouser and then grappled with the victim with sexual intent and thus having committed an offence punishable under Section 10 of POCSO Act.

Complainant (father of the child) stated that his son aged 10 years went to the grocery in front of the lane and after about half an hour came back crying and told him that the accused caught hold of his hand and took the child inside his house and made the child hold the object through which he urinated in his hand sticking to the child and when the child started crying, accused made the child wear his clothes and left him outside.

When the investigation was done, the child corroborated the aspect of his having been molested by the accused.

On being cross-examined by accused’s counsel, child stated that he had narrated the incident first to his mother and later his father was apprised of the same.

High Court on perusal of the impugned judgment and record available held that, it is apparent that the statement of minor child during examination under Section 164 CrPC and the one made in Court corroborate the factum that the minor child had been forcibly taken away by the accused.

Bench observed that, there is variation in the statements under Section 164 CrPC of the minor child in relation to the accused having stuck his body against that of the child.

Division Bench’s decision in, Court on its own Motion v. State, 2018 SCC OnLine Del 10301 was cited and further referring to the same it was stated that,

Hence the Court noted that in the present case it is apparent that there are variations in the statement of the child at different stages of the investigation and the trial but that does not retract in any manner from the veracity of allegations levelled against the accused in view of corroboration of all circumstances of the incident, then by the parents of the minor child and it is thus held that there is no infirmity in the impugned Judgment.

Accused i.e. appellant herein falls within the ambit of sexual assault inflicted in terms of Section 2(i) of the Protection of Child from the Sexual Offences, 2012 (POCSO). The intent of the accused while committing the act on the child is described in terms of Sections 3 & 5 of POCSO Act and thus trial court had rightly drawn the presumption of offence.

In terms of Section 9(m) of POCSO Act whoever commits an offence which falls within the ambit of aggravated sexual assault on the minor thus accused has rightly been convicted by the trial court under Section 10 of POCSO Act, 2012.

Therefore, the deposition of witnesses during trial inclusive of the statement made by the minor child establishes the commission of the offence punishable under Section 367 of IPC, also against the appellant in as much as the act of kidnapping of the minor child from the legal guardianship of his father and dragging him into the house of the accused for commission of an aggravated sexual assault on the minor child was undoubtedly done in order to exercise undue sexual assault inflicted on the minor in terms of Section 12 of the POCSO Act, 2012. [Manoj Tyagi v. State (Govt. of NCT, Delhi), 2020 SCC OnLine Del 469, decided on 25-02-2020]