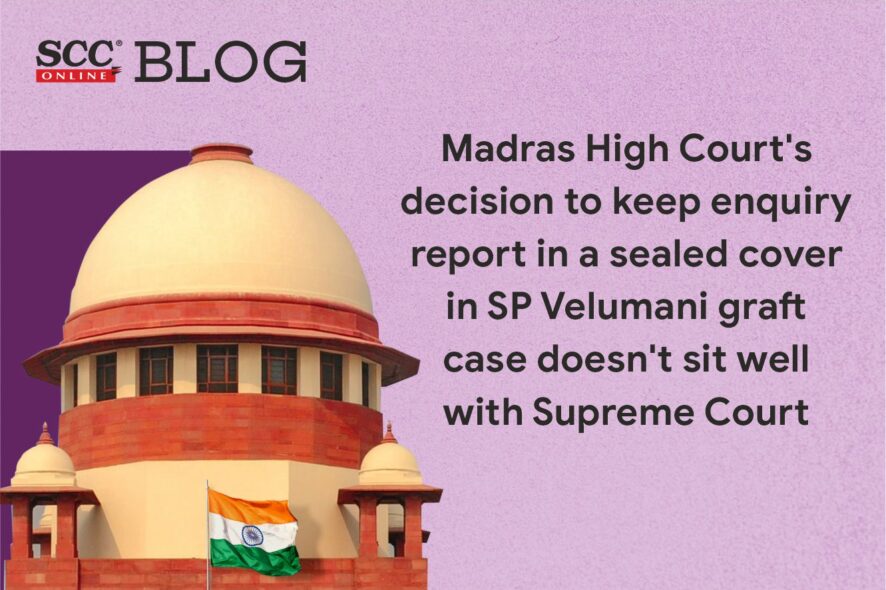 Supreme Court: In the case where the Madras High Court had ordered an enquiry and obtained a report without   furnishing a copy thereof to Tamil Nadu Minister SP Velumani in a corruption case and unceremoniously closed the writ petition, the 3-judge bench of NV Ramana, CJ* and Krishna Murari and Hima Kohli, JJ has held that when the State has not pleaded any specific privilege which bars disclosure of material utilized in the earlier preliminary investigation, there is no good reason for the High Court to have permitted the report to have remained shrouded in a sealed cover.

On 11.09.2018, a private complaint was lodged against the appellant alleging that while he was serving as a Cabinet Minister, he misused his powers to influence the tender process and ensured that tenders were awarded to his close aides. Thereafter, a writ petition was filed seeking investigation into the allegations made in the complaint. The Madras High Court directed an enquiry by a responsible officer, Ms. Ponni, Superintendent of Police, Director of Vigilance and Anti-Corruption, who submitted her preliminary enquiry report to the Director of Vigilance and Anti-Corruption, who in turn submitted a final report before the High Court in a sealed cover. In the meanwhile, the Government took a decision to close the case based on the   aforesaid report submitted by the Court appointed officer. Rather than deciding this issue, the High Court adjourned the matter by a month.  However, it appears that due to various reasons, the matter could not be listed until 19.07.21. In the meanwhile, the State Government had changed. In a turn of events, the State Government went back on their earlier stand to close the criminal case. Instead, the State Government submitted before the High Court that they intended to conduct further investigation in the aforesaid matter.

The High Court the High Court neither provided the appellant an opportunity to defend himself, nor sought a reasoned justification from the State for having turned turtle. Surprisingly, it left the decision completely in the hands of the State Government.

The Supreme Court observed that the High Court committed a patent error in not taking the matter to its logical conclusion.

“It was the High Court which had ordered that a preliminary enquiry be conducted and a report be submitted by the special investigating officer. However, once the enquiry was completed, the High Court failed to even peruse the said report. Rather, the High Court left the decision completely in the hands of the State Government. Such an approach, as adopted by the High Court in the present matter, cannot be countenanced in law.”

Observing that the State cannot blow hot and cold at the same time, the Court held that initiation of the FIR in the present case stemmed from the writ proceedings before the High Court, wherein the State has opted to re-examine the issue in contradiction of their own affidavit and the preliminary report submitted earlier before the High Court stating that commission of cognizable offence had not been made out. Hence, in this background the mandate of Section 207 of CrPC cannot be read as a provision etched in stone to cause serious violation of the rights of the appellant-accused as well as to the principles of natural justice.

The Court, hence, directed the High Court to supply a copy of the report submitted by Ms. R. Ponni, Superintendent of Police along with the other documents to the appellant. It also restored the Writ Petition before the High Court.