Supreme Court: Considering the complexity of the issue related to a ‘Shivling’ found in the complex of the Gyanvali Mosque in Varanasi, the 3-judge bench of Dr. DY Chandrachud, Surya Kant and PS Narsimha, JJ has directed that the suit pending before the Civil Judge, Senior Division, Varanasi should be tried before a senior and experienced judicial officer of the Uttar Pradesh Higher Judicial Service.

Hence, the District Judge will now decide the matter “on priority”.

The Court has further directed: 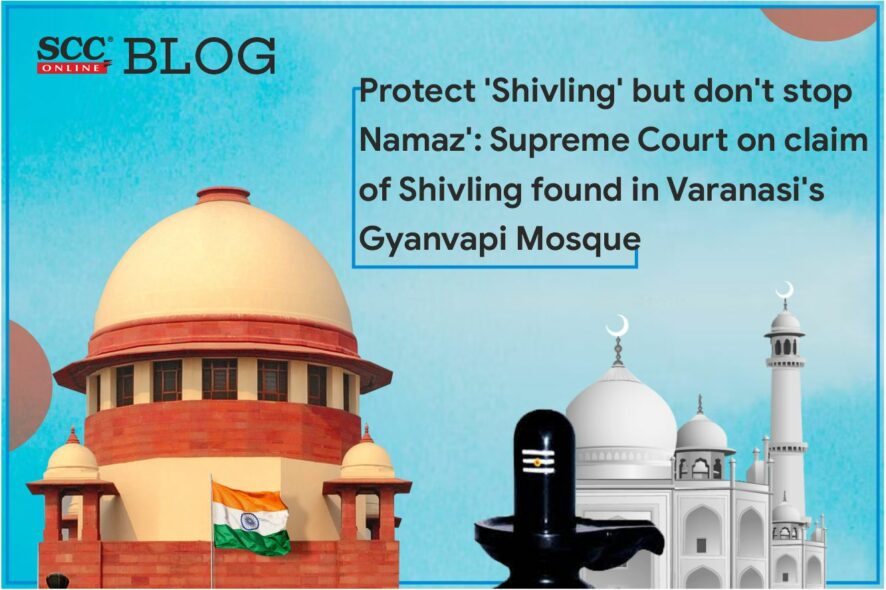 Supreme Court: After it was claimed that a ‘Shivalinga’ was found at the complex of the Gyanvapi mosque in Varanasi, the bench of Dr. DY Chandrachud and PA Narsimha, JJ has directed that while the ‘Shivalinga’ must be protected, it shall not affect the right to offer Namaz and other religious observances.

The three prayers before the Trail Court were:

“1. Direct the C.R.P.F. Commandant to seal the Waju Khana with proper force.

2. Kindly direct the District Magistrate to restrict entire of Muslims for offering Namaz. Not more than 20 Muslims be allowed to offer Namaz.

3. Kindly stop the usage of Weju Khana with immediate effect.”

“The DM, Varanasi is directed that the place where Shivalinga has been found should be sealed with immediate effect and entry of any person should be prohibited in the sealed area. The DM, Varanasi, Police Commissioner, Police Commissionerate, Varanasi and the C.R.P.F. Commandant, Varanasi, are directed that the individual responsibility for the protection and preservation of the place which is being sealed shall be individually upon the aforesaid officers. With regards to the place being sealed the responsibility of supervision of what is being done by the administration shall be upon the Director General of Police, Police Headquarters, Uttar Pradesh, Lucknow and Principal Secretary, U.P. Government, Lucknow.”

It was, hence, argued, before the Supreme Court that the aforementioned order was susceptible of the interpretation that the entirety of the reliefs which were sought has been allowed.

Hence, in order to obviate any dispute on the meaning and content of the order of the Trial Judge, the Court clarified,

“… the operation and ambit of the order dated 16 May 2022 shall stand restricted to the extent that the District Magistrate, Varanasi shall ensure that the area where the Shivalinga is stated to have been found, as indicated in the order, shall be duly protected.”

It was, however, made clear that the direction shall not in any manner restrain or impede the access of Muslims to the mosque or the use of the Mosque for the purpose of performing Namaz and religious observances.