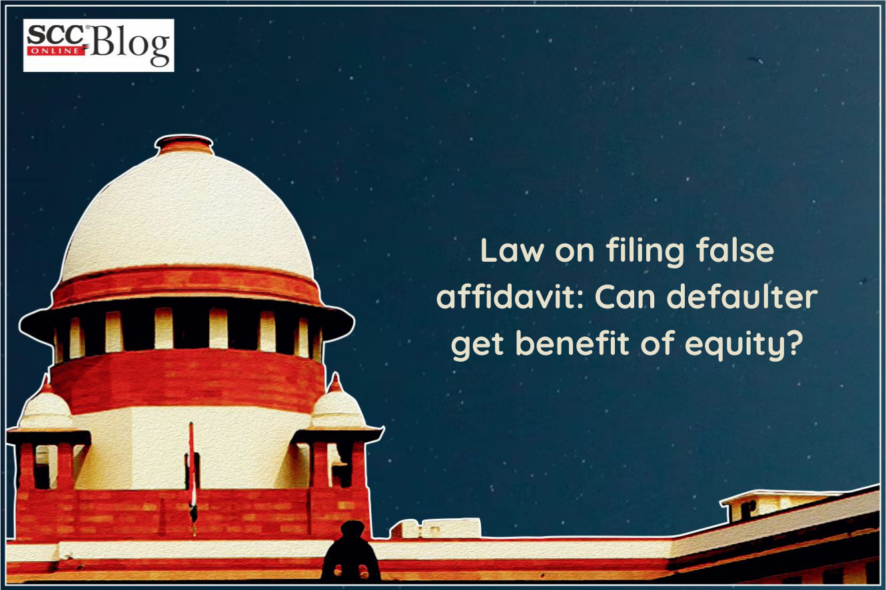 Supreme Court: The Division Bench of Hemant Gupta* and V. Ramasubramanian, JJ., held that a person who misleads the Authority in obtaining allotment of a plot is not entitled to any relief.

While adjudicating a case where the plaintiff had filed a false affidavit to obtain a plot, the Bench rejected the benefit of equity to the plaintiff holding that,

The plaintiff-respondent was allotted a residential plot in Sector- 30, Noida as a member of the Defence Services Cooperative Housing Society; however, prior to the allotment of the said plot, another plot in Sector- 15A, Noida was already allotted to wife of the plaintiff. Consequently, the plaintiff was served with a notice that the Sector 30 plot had been obtained by him by submitting a false affidavit as Sector 15A plot was already allotted to his wife.

The Trial Court held that the lease executed in favour of the plaintiff could not be determined merely by passing the subject order in terms of Section 111 (g) of the Transfer of Property Act, 1887 as no notice for determination of lease under the said section had been issued. Therefore, all rights in the lease would survive. The findings of the Trial Court were concurrently upheld by the first Appellate Court and the High Court. The High Court further held that plaintiff and his wife had no ulterior motive to perpetrate fraud on the appellants as there was no willful or dishonest intention on the part of the plaintiff and his wife.

Submissions of the Plaintiff

The plaintiff submitted that the plot at Sector 15A was applied for because there was an uncertainty on account of litigation between the society of which he was a member with the appellant authority. It was pleaded that since the plaintiff was interested in Sector 30 plot as member of the Society, therefore the wife of the plaintiff had transferred the Sector 15A plot after obtaining permission from the appellant.

Contrary to the concurrent findings of the Courts below, the Bench observed the following faults on the part of the plaintiff:

Rejecting the argument of the plaintiff that as per the decision in ITC Ltd. v. State of U.P., (2011) 7 SCC 493, and Section 14 of U.P. Industrial Development Act, 1976, the Chief Executive Officer alone could cancel the lease, the Bench held that the determination of lease by the Chief Executive Officer would arise if in case there was any violation of the terms of lease. The Bench stated,

“If the condition precedent for grant of lease itself was fraudulent, the cancellation of lease was not required to be preceeded by permission of the Chief Executive Officer.”

Further, the Bench noted that the Chief Executive Officer had granted permission on 13-09-1998, though the cancellation order was passed on 18-10-1996. Therefore, the Bench held that it was a case of irregularity at best which stood removed with the permission of the Chief Executive Officer. Emphasising on the terms and conditions of allotment conveyed to the plaintiff on 01-12-1988 that if allotment is obtained by any misrepresentation or misstatement or fraud, the lease may be cancelled and the possession of the plot and the building thereon may be taken by the Authority, the Bench held that cancellation of allotment of plot obtained after filing false affidavit was a legitimate ground of cancellation of lease.

In the light of above, the Bench concluded that since the second plot allotted to the plaintiff had been allotted against the express terms of allotment, therefore, there was neither equity nor any law in favor of the plaintiff. Consequently, the appeal was allowed and the judgment and decree of the courts below were set aside. 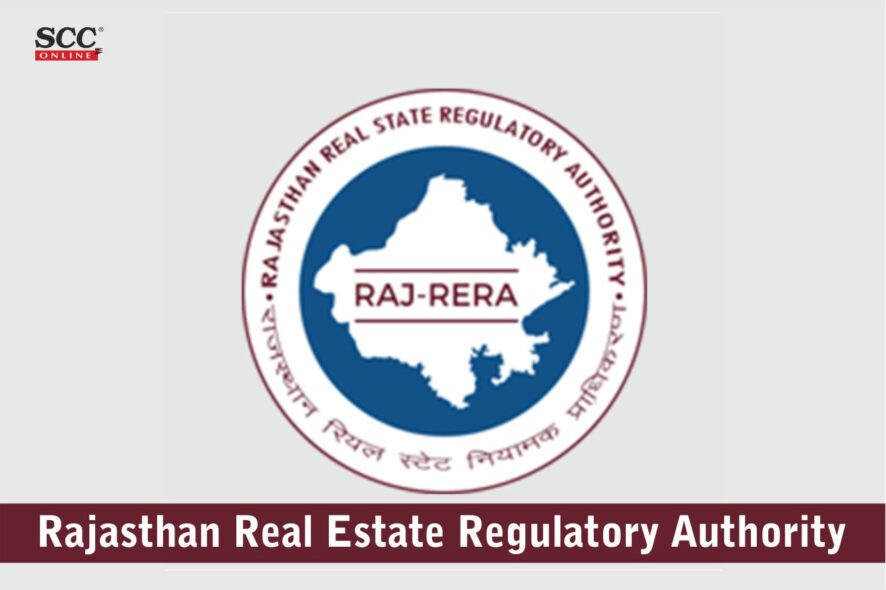 Instant matter was with regard to a project of Jaipur Development Authority registered with RERA.

Though the 15% amount was deposited with respondent 1 , but without executing an agreement for sale, the respondent had issued a further demand note of 35% amount, which was due to be deposited. Respondent included a warning in its demand note.

Complainant stated that respondent 1 had not executed an agreement for sale as envisaged under Section 13 of the RERA and was asking for further amounts to be deposited.

Complainant prayed that respondent 1 should be directed to execute an agreement for sale in terms of Section 13 of the Act and be restrained from asking for a deposit of the remaining amount until such an agreement is executed and registered.

Bench stated that all the provisions of RERA including Section 13 which apply to any advertisement, promotion, booking offer of sale, or sale of any plots in a registered project would apply to the project mentioned in the present matter.

The auction had been conducted by announcing that the project in question was a project registered with RERA and thereby informing and promising to the potential buyers that the provisions of the Act and the rules and regulations made thereunder would apply to this project and determine their relationship with Respondent 1 in respect of any plot purchased at the auction.

In view of the above, Authority directed as under:

For the Complainant: Advocate Pranjul Chopra

Section 13 (1) of the Act provides for an agreement to be executed and registered before the promoter accepts an amount exceeding 10 per cent of the total cost of the plot. This is a mandatory requirement of the Act and cannot be dispensed or compromised with.

Allahabad High Court: A Single Judge Bench comprising of Siddhartha Varma, J., allowed a writ petition which was in respect to Section 82 of the U.P. Revenue Code, 2006.

It was submitted by the petitioner that in accordance with Khasras in the revenue records for the land, agricultural work was going on and prayed for the withdrawal of declaration. It was found on a spot inspection conducted by Revenue Inspector that the plot was vacant and no agricultural work was being done. While responding to the above inspection data, petitioner contended that just because a plot is vacant does not necessarily imply that it is being used for other purposes than agricultural. Whereas the respondent alleged that petitioner was trying to sell the plot and save stamp duty by declaring it as an agricultural land.

The High Court after hearing both the parties quashed the order passed by Additional Commissioner and Sub-divisional Magistrate, Sadar stating that just because a land is vacant, it cannot be concluded that it can never be used for agricultural purposes unless a building is constructed to stop the agricultural scope of the plot. [Sunita Agarwal v. State of U.P., 2018 SCC OnLine All 1326, order dated 11-09-2018]