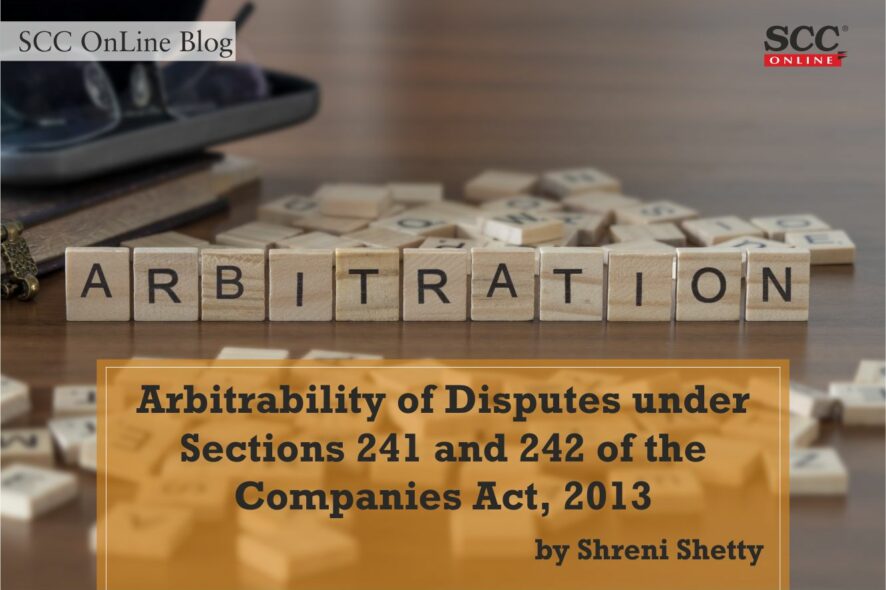 Time and again there have been discussions on whether petitions filed for reliefs sought under Sections 241[1] and 242[2] of the Companies Act, 2013 (CA, 2013), corresponding to Sections 397[3] and 398[4] of the Companies Act, 1956 (CA, 1956), could be referred to arbitration in case if there was an arbitration agreement between the parties to such petition. The Supreme Court of India, coming to the rescue as always, has presented us with an infallible test for resolving this issue, enabling the courts and tribunals make swift decisions in such matters.

In 1999, the Supreme Court was presented with a petition [Haryana Telecom Ltd. v. Sterlite Industires (I) Ltd.6] where the appellant had challenged a decision by the Punjab and Haryana High Court rejecting an application filed by the appellant, under Section 8 of the Arbitration and Conciliation Act, 19967 (ACA) for referring a winding-up petition to arbitration. The Punjab and Haryana High Court had reasoned this decision by stating that matters under the CA, 19568 for such reliefs were not arbitrable. The Supreme Court while rejecting the appeal, opined that Section 8 of the ACA postulates that what can be referred to the arbitrator is only that dispute or matter which the arbitrator is competent or empowered to decide. The Supreme Court further opined that the power to order winding up of a company is contained under the CA, 1956 and is conferred on the court, as such an arbitrator, notwithstanding any agreement between the parties, would have no jurisdiction to order winding up of a company.

The Supreme Court in Sumitomo Corpn. v. CDC Financial Services (Mauritius) Ltd.9 upheld the order of the CLB rejecting a reference to international arbitration under Section 4510 of the ACA stating that the subject-matter of the petition under Sections 397 and 398 before the CLB was pertaining to the affairs of the company and not covered under the arbitration agreement.

Probably picking up this trail of thought, in 2011, the Supreme Court, in Booz Allen and Hamilton Inc. v. SBI Home Finance Ltd.11, set out further clarification and test to examine arbitrability of a dispute. The Supreme Court simplified the test stating that generally and traditionally all disputes relating to right in personam are considered to be amenable to arbitration; and all disputes relating to rights in rem are required to be adjudicated by courts and public tribunals, being unsuited for private arbitration. A right in rem is a right exercisable against the world at large, as contrasted from a right in personam which is an interest protected solely against specific individuals. In this manner, Booz Allen12 judgment crystallised an apparatus to test whether a dispute should or ought to not be referred to arbitration. The Supreme Court, however, has clarified that this is not a rigid or inflexible rule.

The Supreme Court has also confirmed in its decision in Aruna Oswal v. Pankaj Oswal13 that jurisdiction of National Company Law Tribunal (NCLT) in respect of oppression and mismanagement, does not extend to determination of disputes as to succession or ownership of shares, proper forum for which is civil court and that jurisdiction under Sections 241 to 244 must be exercised strictly in terms of provisions of CA, 201314. This makes it clear that disputes regarding succession and ownership of shares, which could be considered as rights in personam, do not fall within the ambit of the jurisdiction of the NCLT.

Going by the reasoning provided by the Supreme Court in Haryana Telecom16 judgment and Booz Allen17 judgment it could be argued that in the event a court or a tribunal has been specifically bestowed with the power to decide any disputes or matters falling under the CA, 1956 and CA, 201318, such disputes or matters ought to be decided by the court so authorised even if there is an arbitration agreement between parties to such dispute. This would evidently render such disputes non-arbitrable.

To continue this line of argument and its application to petitions filed against oppression and mismanagement, it could be noted that Section 242 of the CA, 2013 (corresponding Section 397 of the CA, 1956) bestows a unique observational power upon the NCLT being the Tribunal appointed under the CA, 2013. This section empowers the NCLT to pass any order that it deems fit if, in its opinion, the company’s affairs have been or are being conducted in a manner prejudicial or oppressive to any member or members or prejudicial to public interest or in a manner prejudicial to the interests of the company and it would unfairly prejudice a petitioning member or members to wind up the company, but otherwise the facts justify that it was just and equitable that the company should be wound up. Section 244 of the CA, 2013, also specifies reliefs that the NCLT has the power to be provided in such circumstances.

In view of the Haryana Telecom19 judgment, the Booz Allen20 judgment and the sections mentioned above governing oppression and mismanagement petitions, the following is discernible:

(a) the right provided under these sections are a right in rem;

(b) the NCLT has the exclusive jurisdiction for entertaining petitions seeking reliefs under these sections;

(c) such disputes are non-arbitrable and as such cannot be referred to arbitration; and

(d) bifurcation of the subject-matter of an action brought before a judicial authority is not allowed.

This interpretation has been affirmed and asserted in the landmark judgment of the Bombay High Court in Rakesh Malhotra v. Rajinder Kumar Malhotra21 where the Bombay High Court held that: (a) a petition that is merely “dressed up” and seeks, in the guise of an oppression and mismanagement petition, to oust an arbitration clause, or a petition that is itself vexatious, oppressive, mala fide (or, at any rate, not bona fide) cannot be permitted to succeed; (b) in assessing an allegation of “dressing up”, the Sections 397/398 petition must be read as a whole, including its grounds and the reliefs sought; (c) it cannot be carved up and deconstructed so as to bring some matters within the arbitration clause and leave other matters out; and (d) where there are reliefs that are not arbitrable because they fall within Section 402 of the CA, 195622, there is no question of a dismissal of the petition on the ground that there exists an arbitration clause.

The Bombay High Court at Goa, while following this principle in Emgee Housing (P) Ltd. v. ELS Developers (P) Ltd.23 held that even if, there is an arbitration agreement between the parties and even if, the dispute is covered by the arbitration agreement, the court/judicial authority will refuse the application under Section 8 of the ACA, if the subject-matter of the dispute is capable of adjudication only by a public forum.

The National Company Law Appellate Tribunal has also supported this stand in Dhananjay Mishra v. Dynatron Services (P) Ltd.24 and held that on a plain reading of Section 242 of the CA, 2013, it is manifestly clear that the facts should justify the making of a winding-up order on just and equitable grounds and admittedly, arbitrator would have no jurisdiction to pass a winding-up order on the ground that it is just and equitable which falls within the exclusive domain of the NCLT under Section 271(e) of the CA, 201325.

It can be seen from the plethora of decisions mentioned above, that the evident takeaway and the solidified legal position as regards this issue is that reliefs against oppression and mismanagement sought under Sections 241 and 242 of the CA, 2013 cannot be referred to arbitration even if there is an existing arbitration agreement between the parties to such dispute. However, as always, legal positions are not set in stone and are subject to changes pursuant to judicial or legislative overrule.

The appellant had filed an application under Sections 393, 398, 402 and 406 of Companies Act, 1956 alleging oppression and mismanagement against the respondent company. The application was disposed by NCLT by the impugned order.

Kumar Sudeep and Prasanna S., Advocate appearing for the appellant submitted that he had raised more than 10 issues but only one issue relating to valuation was addressed by NCLT and rest were neither discussed nor decided.

The Appellate Tribunal noted that on a bare perusal of the impugned order it appeared that the appellant raised only one issue before NCLT which was decided. It was observed, “There may be many issues pleaded before the Tribunal but the Tribunal is not required to suo-motu go through all the issues if during the hearing the parties do not address rest of the issues.” The Appellate Tribunal was of the view that the appellant may bring the matter to the notice of NCLT by filing a review petition along with certificate of the arguing counsel that he had argued on the other issues. [B. Govinda Ramesh v. Vinyasa Engg. (P) Ltd., 2019 SCC OnLine NCLAT 4, dated 03-01-2019]