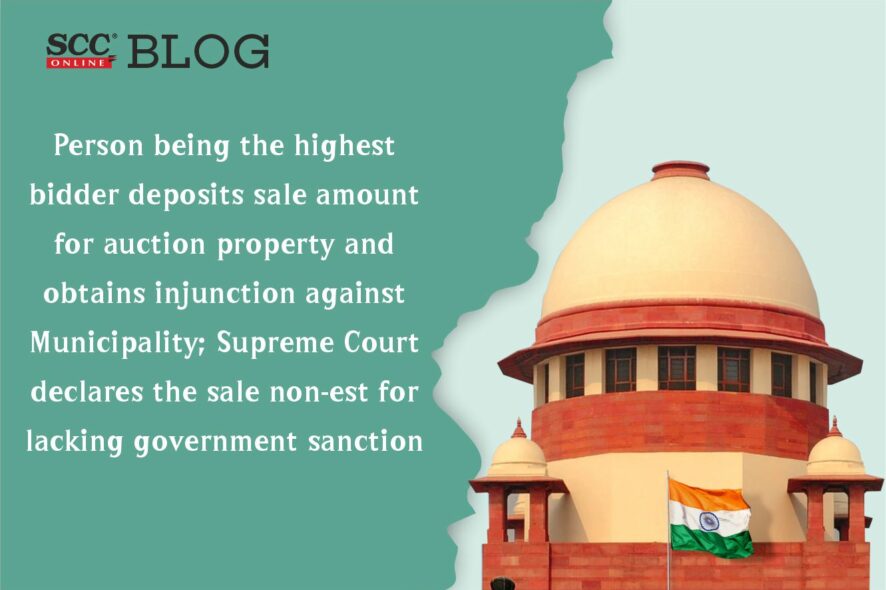 Supreme Court: The Division Bench comprising of Hemant Gupta* and V. Ramasubramanian, JJ., reversed concurrent findings of Trial Court and Punjab and Haryana High Court by setting aside mandatory injunction granted against the Municipal Committee. The Bench held that merely being the highest bidder in auction will not entitle one of any right over the property unless there is an official communication indicating the sale has attained finality.

The Municipal Committee, Barwala had impugned the mandatory injunction granted to the plaintiff-respondent by the Trial Court and upheld by the High Court to execute a sale deed in respect of land measuring 55 kanals 5 marlas sought by the plaintiff.

The respondent-plaintiff had claimed title and possession over the disputed property on the basis of an open auction conducted by the Sub-Divisional Officer in 1999 and consequently, had obtained mandatory injunction against the Municipal Committee over said property. The plaintiff claimed that being the highest bidder and having deposited the total sale consideration of Rs.15,76,150 with the Municipal Committee, he was a bonafide purchaser and was in possession as owner of the suit land.

However, the Municipal Committee disputed the possession of the plaintiff as illegal contending that the Committee could not execute the sale deed without proper sanction of the competent authority i.e., Government of Haryana. The committee argued that the auction was not approved by the State Government and till such time the auction is confirmed, mere fact that the plaintiff was the highest bidder would not confer any equitable and legal right to him. It is only after the confirmation of sale and the letter accepting the bid is issued, the plaintiff could claim any enforceable right.

The Committee further submitted that the approval of sale by public auction itself did not amount to confirmation of auction; therefore, in the absence of confirmation of sale by the State Government, the plaintiff would not get any right over the property.

Whether merely being the highest bidder would confer any equitable and legal right over the property?

The Bench observed that the Haryana Municipalities Management of Municipal Properties and State Properties Rules, 1976 contemplates two acts to be completed by the Deputy Commissioner for alienating immovable property owned by Municipal Committee, one of which is approval of conduct of sale which was granted on 25-10-1995. However, the other important requirement is that no sale by auction shall be valid until it has been confirmed by the Deputy Commissioner.

Relying on the decision in State of Punjab v. Mehar Din, 2022 SCC OnLine SC 250, the Bench observed that State or authority which can be held to be State within the meaning of Article 12 of the Constitution is not bound to accept the highest tender of bid. Similarly, reliance was also palced by the Bench on the decision of Constitution Bench in Bachhittar Singh v. State of Punjab, AIR 1963 SC 395, to hold that merely writing something on the file does not amount to an order.

Evidence Act, 1872 and Presumption of Correctness

Noticeably, in pursuance of the powers conferred on the State Government, a message was conveyed on behalf of the Director, Local Bodies, Haryana to all the Deputy Commissioners of the State of Haryana that no municipal property will be sold without the prior approval of the Government. However, the Trial Court had discarded such communication for the reason that the communication had not been proved as per the provisions of the Evidence Act, 1872.

Considering that the communication had been produced by the Municipal Committee when the Committee examined Mahavir Singh, Secretary as DW-1 and Sandeep Kumar, Building Inspector as DW-2, the Bench opined that such communication had come on record from the official source which would carry presumption of correctness under Section 114 of the Indian Evidence Act, 1872 that the official acts had been regularly performed. The Bench added,

“The original record was not necessarily required to be proved by summoning the Government officials as such document was produced by the officials of the Municipal Committee from the official record.”

After factually analyzing the instant case, the Bench reached to the following findings:

In view of the above, the Bench concluded that the plaintiff had been granted decree for mandatory injunction not only beyond the period of limitation but in contravention of the statute and the rules framed thereunder. Consequently, the appeal was allowed, the impugned judgments were set aside and the plaintiff’s possession of the disputed property was found to be illegal.

The Municipality was granted liberty to take possession of land and the amount of Rs.15,76,150 deposited by the plaintiff was directed to be forfeited towards the damages for the illegal occupation of the land for more than 20 years since the date of auction in contravention of law.