The fact that the population of India has already crossed over 125 crores is really frightening. The country has doubled its population in just forty years and is expected to unseat China as the world’s most populated country in the next couple of decades i.e. by the year 2050. As per UN Report, India, Nigeria and Pakistan are the countries which have the highest rate of growth of population. India’s current yearly growth rate is 1.02 per cent. The country as a whole has a population density of 416 people per square kilometer, which ranks 31st in the World. Despite the fact that we have framed a National Population Control Policy, we are the second-most populous country in the world.

Today, there is a greater need to keep a strong check on the increase of our population.

Today, there is also a need to encourage the poeple to keep small family by offering tax concessions, priority in social benefit schemes and school admissions etc. and at the same time discourage them from producing more children by withdrawing tax concessions, imposing heavy taxes and by making other punitive provisions for violations.

Hence the said bill has been introduced.

The Bill seeks to amend the Constitution with a view to make a provision by the State to discourage the people from increasing their family and encourage them to keep their family limited to two children only.

The said Act will be called the Constitution (Amendment) Act, 2020.

Insertion of New Article 47 A

After article 47 of the Constitution, the following article shall be inserted, namely:—

‘‘47A. The State shall promote small family norms by offering incentives in taxes, employment, education, etc. to its people who keep their family limited to two children and shall withdraw every concession from and deprive such incentives to those not adhering to small family norm, to keep the growing population under control.’’

*Here is the link to the Bill: The Constitution (Amendment) Bill, 2020 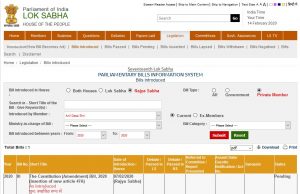