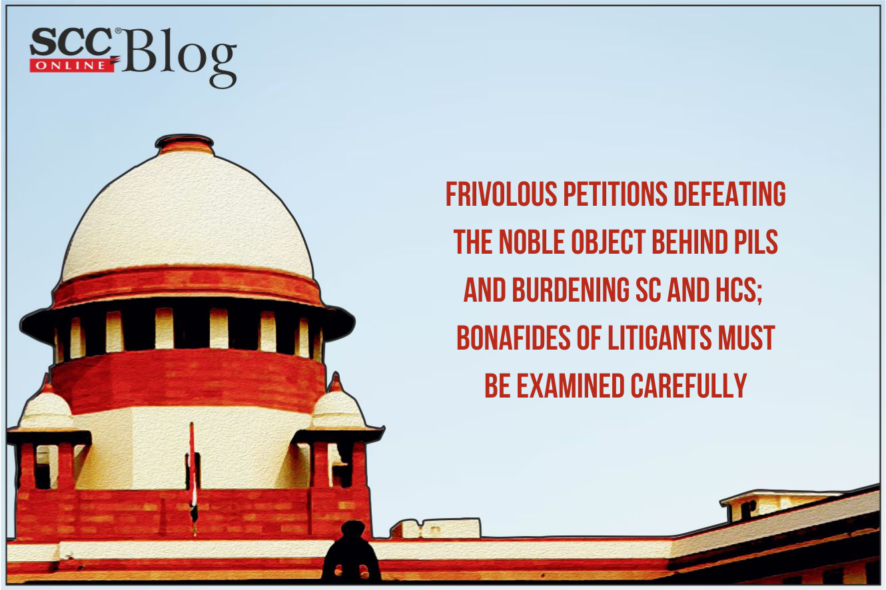 Supreme Court: The 3-judge bench of NV Ramana*, CJ and AS Bopanna and Hima Kohli, JJ has urged the Courts to be cautious when examining locus standi in Public Interest Litigations in order to ensure that frivolous or private interests are not masqueraded as genuine claims.

“Although the jurisprudence of Public Interest Litigation has matured, many claims filed in the Courts are sometimes immature. Thousands of frivolous petitions are filed, burdening the docket of both this Court and the High Courts. Noble intentions behind expanding the Court’s jurisdiction to accommodate socially relevant issues, in recent decades, have been critically analyzed. In our view, PIL litigation has had a beneficial effect on the Indian jurisprudence and has alleviated the conditions of the citizens in general. For those at the receiving end of the Court’s directions, we can only advise “C’est la vie”.”

Noticing the nature of PILs, the Court said that generally, PIL, being a summary jurisdiction, has limited powers to examine the bonafides of parties. It is usually on the pleadings that the Court should take a prima facie view on the bonafides of the party. If the Court concludes that the litigation was initiated under the shadow of reasonable suspicion, then the Court may decline to entertain the claims on merits. In these cases, Courts have multiple options – such as dismissing the PIL or appointing an amicus curiae, if the cause espoused in the case requires the immediate attention of the Court.

The Court was hearing a matter relating to the rights and ownership over a land, wherein the dispute regarding title was originally between one Gonsalves family and the State of Maharashtra. The land was vested into the State by an ex parte order. This order was recalled by the Revenue Minister after a Revision Application was moved by the Esteem Properties, the successors of the disputed property.

The Respondent nos. 1 and 2, however, moved the writ petition as public property belonging to the State Government was being transferred to private individuals and would lead to loss of public revenue.

The Court, however, observed that the PIL petitioners had no reason to file a public interest litigation when the subject matter was evidently a title claim between a private party and the State. It was noticed that the bonafides of the respondent nos. 1 and 2 were not considered in a proper perspective by the Bombay High Court while allowing the PIL.

The Court, also held that the PIL petitioners had no reason to file a public interest litigation when the subject matter was evidently a title claim between a private party and the State. Interestingly, the State Government itself concedes the title to the appellants herein and has filed affidavits to such effect, both before the Supreme Court and the High Court. Further, the State has clearly indicated that they do not have any interest in pursuing the ownership of the land in question and have admitted to the title of the appellants. Hence, the Court was not dealing with an ignorant or illiterate respondent; the State Government has accepted the title vesting in the Gonsalves family and subsequently in Esteem Properties.

In this light, it was held that institution of the public interest litigation was nothing more than an abuse of the process which cannot be allowed in the facts and circumstance so narrated.

“The raison d’etre of contempt jurisdiction is to maintain the dignity of the institution of judicial forums. It is not a vindictive exercise nor are inappropriate statements by themselves capable of lowering the dignity of a Judge. These are often ignored but where despite all latitude a perennial litigant seeks to justify his existence by throwing mud at all and sundry, the Court has to step in.”

Supreme Court: Coming down heavily upon a contemnor, the bench of Sanjay Kishan Kaul* and MM Sundresh, JJ has held that the power to punish for contempt is a constitutional power vested in this Court which cannot be abridged or taken away even by legislative enactment.

“… the easier path is to recuse or give up the matter instead of inviting so much trouble. But then that is not the course for which the Judges have taken oath. Sometimes the task is unenviable and difficult but it must be performed for the larger good of the institution. Such litigants cannot be permitted to have their way only because they can plead and write anything they feel like and keep on approbating by sometimes apologising and then again bringing forth those allegations. We have thus chosen the more difficult path.”

Taking note of the fact that all kinds of pleadings were being made in an issue of what was simply of recovery of costs from the Trust/ Daiya and that letters were also written to scandalise the Court and prevent the Court from taking action to ensure recovery of costs, the Court noticed that it was clearly an endeavour to browbeat the Court which the Court would not countenance.

“… there is no absolute licence when appearing in person to indulge in making aspersions as a tendency to scandalise the Court in relation to judicial matters. Motivated and calculated attempts to bring down the image of the judiciary in estimation of public and impair the administration of justice must bester themselves to uphold their dignity and the majesty of law.”

The Court further said that the contemnor’s actions to scandalise the Court cannot be countenanced. He continues with his contumacious behaviour. The apologies submitted by him are only endeavours to get out of the consequences again followed by another set of allegations, thus, a charade. The last apology can hardly be called an apology seeing the contents.

“We have little doubt that what the contemnor has been endeavouring is to have his way or, alternatively, I will throw mud at all and sundry, whether it be the Court, its administrative staff or the State Government so that people, apprehensive of this mud thrown, may back off. We refuse to back off and are clear in our view that we must take it to its logical conclusion.”

On the question of right to be heard on sentence, the Court said that though it is a contempt on the face of the Court by the reason of the pleadings filed by him and the Court is not mandated to give him a hearing on the issue of sentence, it would still give him one more chance and, thus, consider it appropriate to list the petition to hear the contemnor on the question of final sentence.

Supreme Court: In the matter where the petitioner, who had filed a PIL pertaining to the challenge to the Animal Birth Control (Dogs) Rules of 2001, framed under the Prevention of Cruelty to Animals Act, 1960, had alleged sexual harassment by one of the opponents, the Court said that the petitioner had crossed all sense of propriety, restraint, decorum and, in fact, demonstrated brazen sense of insensibility and insensitivity to the process of adjudication and dignity for women. The Court added that when a public spirited person advocates for a cause which he feels is a public cause and this Court entertains the public interest litigation, more additional responsibility has to be cultivated by the petitioner.

The bench of Dipak Misra and Amitava Roy, JJ said that when the petitioner’s public interest litigation was entertained and he was permitted to argue in person, he should have understood that this Court had appreciated his concern for the lis, but by filing the present interlocutory application, it seems that he has thrown the initial decorum that allowed him to address the Court to the winds. The bench noticed that even though the allegations made are scandalous, unwarranted, indecent and absolutely uncalled for, the petitioner should have been well advised that such kind of allegations are not made in an application which has nothing to do with the subject matter of the lis, but may have something to do with a particular individual.

The Court directed that neither the electronic media nor the print media shall publish anything that will relate to identity of the lady or any remark in the interlocutory application as that stands expunged by this Court. Restraining the petitioner from circulating the interlocutory application in any manner whatsoever or speaking about it or publishing them either directly or indirectly, the Court added that any activity of this nature would amount to contempt of this Court and if such an event takes place, the person concerned will invite the wrath of law and the consequences of the same may be quite disastrous for him. [Sabu Steephen v. Union of India, 2016 SCC OnLine SC 1297, order dated 22.11.2016]