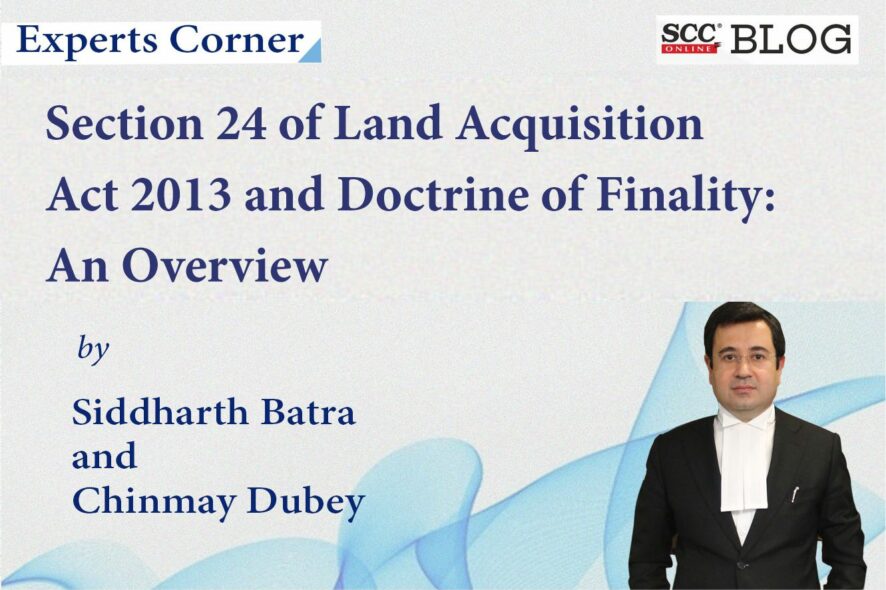 Just before the country stepped into the grasp of COVID-19 Pandemic, the Supreme Court of India delivered a verdict in Indore Development Authority v. Manoharlal[1] hereinafter “Indore Development Authority (5-Judge Bench)”, which gave a new interpretation to Section 24 of the Right to Fair Compensation and Transparency in Land Acquisition, Rehabilitation and Resettlement Act, 2013 (hereinafter “2013 Act”).

Subsequently, the Court overruled the three-Judge Bench decision in Pune Municipal Corpn. v. Harakchand Misirimal Solanki[2] (hereinafter “Pune Municipal Corporation”) and even the decisions which were decided on the basis of Pune Municipal Corpn. case[3], which rose a wall of conflict because and leads to the question as to whether a case that has attained finality be “reopened” merely because there’s a change in interpretation of law?

In this piece we analyse whether overruling of a precedent on the basis of change in interpretation of Section 24 of the Land Acquisition Act, 2013 by a bigger Bench could lead to reopening of the cases which are already decided and have attained finality.

In 2013, the government brought the Right to Fair Compensation and Transparency in Land Acquisition, Rehabilitation and Resettlement Act, 2013, which replaced the Land Acquisition Act of 1894 (hereinafter “1894 Act”).

The 2013 Act was a ray of hope which was blocked since decades in terms of fair compensation and rehabilitation across the country.  The Act was said to correct the historical wrongs in the process of land acquisition by the state for development projects and insisted on fair compensation for landowners, past and present.

The Controversy Around “Section 24” of Land Acquisition Act, 2013

On the other hand, Section 24(2) says that in case the compensation award has been made under the Land Acquisition Act, 1894, then the land acquisition proceedings under the 1894 Act would be deemed to have lapsed.

(a) where no award under Section 11 of the said Land Acquisition Act has been made, then, all provisions of this Act relating to the determination of compensation shall apply; or

(b) where an award under said Section 11 has been made, then such proceedings shall continue under the provisions of the said Land Acquisition Act, as if the said Act has not been repealed.

Provided that where an award has been made and compensation in respect of a majority of land holdings has not been deposited in the account of the beneficiaries, then, all beneficiaries specified in the notification for acquisition under Section 4 of the said Land Acquisition Act, shall be entitled to compensation in accordance with the provisions of this Act.

In 2014, a three-Judge Bench comprising of Justice Lokur, Justice Joseph and Justice Lodha in Pune Municipal Corpn. case[5] held that deposit of compensation amount in the government treasury is of no avail and cannot be held to be equivalent to compensation paid to the landowners/persons interested. The court remarkably said that if such compensation is not paid to the landowner then “the subject land acquisition proceedings shall be deemed to have lapsed under Section 24(2) of the 2013 Act”.

The precedent laid down in Pune Municipal Corpn. case[7] was overruled by another three-Judge Bench comprising of Justice Arun Mishra, Justice A.K. Goel and Justice Shantanagoudar in Indore Development Authority v. Shailendra[8] [hereinafter “Indore Development Authority (3-Judge Bench)”]. The Court opined that the compensation under Section 24 of the Act was deemed to have been paid if the money were deposited in the government treasury and the same need not be deposited in court.

The court remarked that the provision has been sought to be blatantly misused and the law never envisages such absurd results as is being sought to be achieved.

Conflict between the two Benches

In 2020, there was a conflict whether a three-Judge Bench can overrule another three-Judge Bench judgment which we saw in Indore Development Authority[10] (3-Judge Bench). Accordingly, the same was referred to a larger Bench, which also turned out to be controversial as Justice Arun Mishra was part of the larger Bench.

In this regard, an application was filed before the court for the recusal of Justice Arun Mishra from the larger Bench, as he had decided the issue in the three-Judge Bench. Senior Advocate Shyam Divan, in the course of his submissions, referred to the phrase “no man can be a Judge in his own cause”.

Later, Justice Mishra refused to rescue from the larger Bench and said:

In March 2020, a five-Judge Constitution Bench led by Justice Arun Mishra in Indore Development Authority[13] (5-Judge Bench), held that proceedings under Section 24 of the 2013 Act will not lapse if compensation has been deposited in the treasury, not requiring the payment to the landowner or court concerned. In doing so, the Court upheld an earlier judgment in Indore Development Authority[14] (3-Judge Bench) which was also headed by Justice Arun Mishra.

The Court further held that landowners cannot say in court that proceedings have lapsed if the Government has rendered the amount of treasury and there was no need to actually deposit the amount with landowners or court.

Justice Bobde said the order gifted the Government “laxity” in several aspects, which even Parliament did not bother to provide under the 2013 Act.

The judgment in Indore Development Authority[21] (5-Judge Bench) also missed a chance to apply to the doctrine of prospective overruling and rather the Court held that other decisions which were finalised/decided on the base of Pune Municipal Corpn.[22] would also be overruled. This was not only problematic but bad in law also, because once the matter/suit has been concluded between the parties then it cannot be reopened due to a subsequent change in position of law.

There have been many instance where the courts have clarified that if matter has been concluded between parties, the same parties cannot be reopen the case due to a subsequent change in position of law which is not expressly retrospective.

The doctrine of prospective overruling has been borrowed from the American judicial system. It states that when a decision made in a particular case would have operation only in the future and will not carry any retrospective effect on any past decisions.

In ECIL v. B. Karunakar[28], the court placed reliance on Supreme Court of United States and highlighted that while overruling previous law or laying a new principle, the US Supreme Court had made its operation prospective and given the relief to the party succeeding and in some cases given retrospectively and denied the relief in other cases.

Doctrine of Finality of Judgment and Res Judicata

Section 11 of the Code of Civil Procedure envisages the doctrine of res judicata or the rule of inclusiveness of a judgment, as to the points decided either of facts, or of law, or of fact and law in every subsequent suit between the same parties.

The doctrine of res judicata is based on three Roman maxims:

(a) Nemo debet bis vaxari pro una et eadem causa (no man should be vexed twice for the same cause);

(b) interest reipublicae ut sit finis litium (it is in the interest of the State that there should be an end to a litigation);

(c) re judicata pro veritate occipitur (a judicial decision must be accepted as correct).

The doctrine of finality of judgments puts an end to the judicial process, prohibiting subsequent appeals, new proceedings and disputing clearly established facts. Hence, the decision in Indore Development Authority (5J Bench)[29], where the Supreme Court had ordered the “reopening” of cases which have been already decides, goes against the aforementioned principle (doctrine of finality) and here are some of the decisions where the courts have taken a view about it.

In Chanchal Kumar Chatterjee v. State of W.B.[30], the Calcutta High Court held that the principle of finality of litigation is based on a sound firm principle of public policy and in the absence of such a principle great oppression might result under the colour and pretence of law inasmuch as there will be no end to litigation.

In this regard, the Court held:

Further, in Indu Bhusan Jana v. Union of India[31], the Calcutta High Court also stressed that the principle of finality or res judicata is a matter of public policy and is one of the pillars on which a judicial system is founded. In this regard, the Court held:

Even, the Supreme Court in Union of India v. S.P. Sharma[33], held that the main object of the doctrine is to promote a fair administration of justice and to prevent abuse of process of the court.

Hence, the finality of judgments, particularly at the Supreme Court is an aspect of public policy and fundamentally linked to the doctrines or res judicata and stare decisis.

Significantly, the Court also held that finality of judgment is absolutely imperative and great sanctity is attached to the finality of the judgment and it is not permissible for the parties to reopen the concluded judgments of the court.

With regard to endless litigation and reopening of cases, the court said that the principle of finality of litigation is based on a sound firm principle of public policy. In the absence of such a principle great oppression might result under the colour and pretence of law inasmuch as there will be no end to litigation.

“The doctrine of res judicata has been evolved to prevent such anarchy” the court remarked.

In Atam Prakash v. State of Haryana[35],  the Court held that the suits which have been decreed and such decrees have become final since no appeals have been filed against the same, the said decrees are binding inter-parties and the declaration made by the Supreme Court is of no avail to the parties thereto.

In this regard, the Court opined that:

Similarly, the Supreme Court in Shanti Devi v. Hukum Chand[37], agreed with the position laid down in Atam Prakash case[38] and held:

Notably, while affirming with High Court’s view the Supreme Court in Union of India v. Ranbir Singh Rathaur[41], held that review of the earlier orders passed by this court was “impermissible” and approach of the High Court of reopening the case was “erroneous” and the issue of maintainability of the petitions was of paramount importance.

It further said that to say that “justice stood at the higher pedestal” then the finality of litigation was not an answer enabling the court to reopen a finally decided case.

Furthermore, in Kalinga Mining Corpn. v. Union of India[42], the Supreme Court held that it is well settled that judicial review of the administrative action/quasi-judicial orders passed by the Government is limited only to correcting the errors of law or fundamental procedural requirements which may lead to manifest injustice.

To conclude, it is pertinent to refer to what Supreme Court remarked in Ambika Prasad Mishra v. State of U.P. [43],

“6. It is wise to remember that fatal flaws silenced by earlier rulings cannot survive after death because a decision does not lose its authority ‘merely because it was badly argued, inadequately considered and fallaciously reasoned“.

The question that ultimately arises is whether Doctrine of Finality become a causality after Indore Development Authority: Can the cases where rights are already frozen be reopened? In my view, in case the cases decided are reopened, it will certainly lead to an anomaly in the settled principle of law.