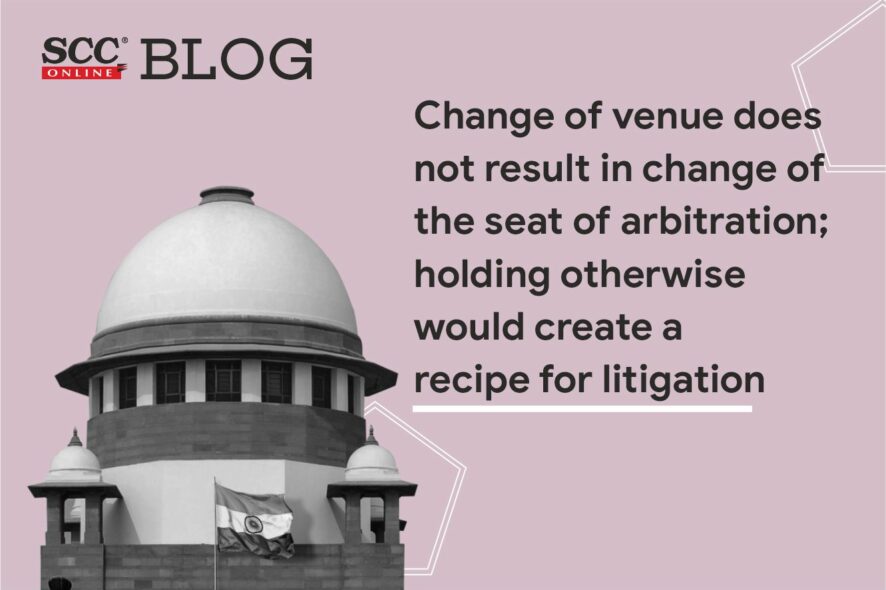 Supreme Court: The bench of Ajay Rastogi and Sanjiv Khanna*, JJ has held that subsequent hearings or proceedings at a different location other than the place fixed by the arbitrator as the ‘seat of arbitration’ should not be regarded and treated as a change or relocation of jurisdictional ‘seat’.

In order to avoid uncertainty and confusion resulting in avoidable esoteric and hermetic litigation as to the jurisdictional ‘seat of arbitration’, the Court observed that ‘the seat’ once fixed by the arbitral tribunal under Section 20(2) of the Arbitration and Conciliation Act, 1996, should remain static and fixed, whereas the ‘venue’ of arbitration can change and move from ‘the seat’ to a new location. Venue is not constant and stationary and can move and change in terms of sub-section (3) to Section 20 of the Act.

The Court held that holding otherwise would create a recipe for litigation and (what is worse) confusion which was not intended by the Act. The place of jurisdiction or ‘the seat’ must be certain and static and not vague or changeable, as the parties should not be in doubt as to the jurisdiction of the courts for availing of judicial remedies. Further, there would be a risk of parties rushing to the courts to get first hearing or conflicting decisions that the law does not contemplate and is to be avoided.

Effect of supervisory jurisdiction by the courts

Further, exercise of supervisory jurisdiction by the courts where the arbitration proceedings are being conducted is a relevant consideration, but not a conclusive and determinative factor when the venue is not ‘the seat’. ‘The seat’ determines the jurisdiction of the courts. There would be situations where the venue of arbitration in terms of sub-section of 28 (3) of Section 20 would be different from the place of the jurisdictional ‘seat’, and it is equally possible majority or most of the hearing may have taken place at a venue which is different from the ‘seat of arbitration’.

Effect of substantive Proceedings being held at a different venue