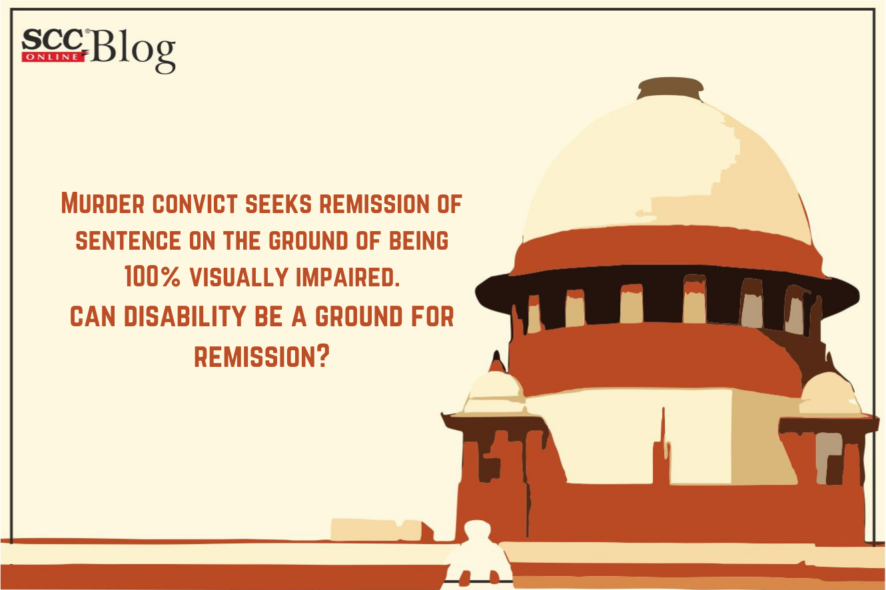 Supreme Court: While addressing the plea of a murder convict seeking remission on the ground of blindness, the Division Bench comprising of Sanjay Kisan Kaul and M. M. Sundresh, JJ., directed him to under go medical assessment under Rule 363 of the M.P. Prison Rules and thereafter approach the Governor under Article 161 of the Constitution.

Notably, the appellant had already undergone sentence of 9 years 10 months and 6 days including remission (actual period 8 years 1 month and 23 days). While pleading remission of sentence to the sentence already undergone, the appellant submitted that instead of canvassing the appeal on merits, an alternative course might be adopted; i.e. Rule 363 of the M.P. Prison Rules, 1968 which provides that where the Medical Officer of the prison is of the opinion that the convicted prisoner has gone completely and incurably blind not as a result of any voluntary act of the prisoner or that a convict prisoner has become completely decrepit or has become disabled on account of incurable physical informity which incapacitated him from the commission of further crime on his release and as such where the release of such a prisoner is not likely to be attended with mischief or danger, he shall report the case of the prisoner to the Superintendent.

The appellant contended that since he is visually impaired to the extent of suffering permanently from 100% blindness and that was not a result of any voluntary act of the prisoner, the aforementioned provision would come to his aid for consideration of his case for release from serving out the remaining sentence.

Considering the case of State of Haryana v. Raj Kumar, (2021) 9 SCC 292, wherein it was held that the benefit of remission can only be granted by the State Government if a prisoner has undergone a minimum period of imprisonment of 14 years without remission as well as the provisions of 432, 433 & 433A of the CrPC read with Article 161 of the Constitution, the Bench agreed that the State can recommend and the power would have to be exercised by the Governor under Article 161 of the Constitution albeit on the aid and advise of the State.

Accordingly, the Bench directed that the appellant, though on bail, to report to the Medical Officer of the prison and stay in observation for few days if required to enable the authorities concerned to comply with procedure enshrined in Rule 363 of the M.P. Prison Rules, 1968 and assess disability of the appellant. Thereafter, the case of the appellant was directed to be laid before the Government.

Hence, the Bench observed that it is only after compliance of Rule 363 that the case of the appellant could be referred to the Governor for exercise of power under Article 161 of the Constitution. Therefore, the Bench directed that the appellant to invoke Rule 363 of the said rules and make an application with all the relevant material within three weeks and simultaneously apply to the Governor under Article 161 of the Constitution.

Since the Court had not addressed the appeal on merit, the matter was directed to listed for directions on 19-07-2022.