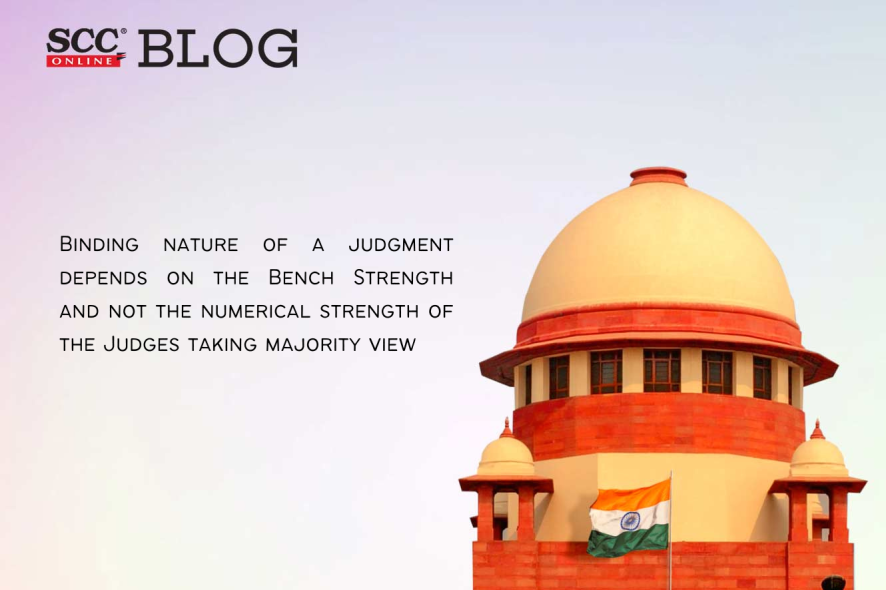 Supreme Court: Explaining the doctrine of precedents, the 5-judge Constitution Bench of Indira Banerjee*, Hemant Gupta*, Surya Kant, MM Sundresh and Sudhanshu Dhulia, JJ has held that the numerical strength of the Judges taking a particular view is not relevant, but the Bench strength is determinative of the binding nature of the Judgment.

The Court went through the following rulings of the Court on this point:

In Jaishri Laxmanrao Patil v. Chief Minister, (2021) 8 SCC 1, it was held that the existence of a plurality of opinions or discordant or dissident judgments in the past — which might even have led to a majority (on an overall headcount) supporting a particular rule in a particular case cannot detract from the legitimacy of a rule enunciated by a later, larger Bench.

If the doctrine of precedents i.e. stability in the law were to be departed from and the legitimacy of a subsequent larger Bench ruling were to be doubted on the ground that it comprises of either plurality of opinions or a narrow majority as compared with a previous Bench ruling (which might be either unanimous or of a larger majority, but of lower Bench strength), there would be uncertainty and lack of clarity in the realm of precedential certainty. If precedential legitimacy of a larger Bench ruling were thus to be doubted, there are no rules to guide the courts’ hierarchy or even later Benches of the same court about which is the appropriate reading to be adopted (such as for instance, the number of previous judgments to be considered for determining the majority, and consequently the correct law).

In Union of India v. Raghubir Singh, (1989) 2 SCC 754, it was observed that although the Court sits in divisions of two and three Judges for the sake of convenience but it would be inappropriate if a Division Bench of two Judges starts overruling the decisions of Division Benches of three. To do so would be detrimental not only to the rule of discipline and the doctrine of binding precedents but it will also lead to inconsistency in decisions on points of law; consistency and certainty in the development of law and its contemporary status — both would be immediate casualty.

In Central Board of Dawoodi Bohra Community v. State of Maharashtra, (2005) 2 SCC 673, the Court summed up the position as follows:

(1) The law laid down by this Court in a decision delivered by a Bench of larger strength is binding on any subsequent Bench of lesser or coequal strength.

(2) A Bench of lesser quorum cannot disagree or dissent from the view of the law taken by a Bench of larger quorum. In case of doubt all that the Bench of lesser quorum can do is to invite the attention of the Chief Justice and request for the matter being placed for hearing before a Bench of larger quorum than the Bench whose decision has come up for consideration. It will be open only for a Bench of coequal strength to express an opinion doubting the correctness of the view taken by the earlier Bench of coequal strength, whereupon the matter may be placed for hearing before a Bench consisting of a quorum larger than the one which pronounced the decision laying down the law the correctness of which is doubted.