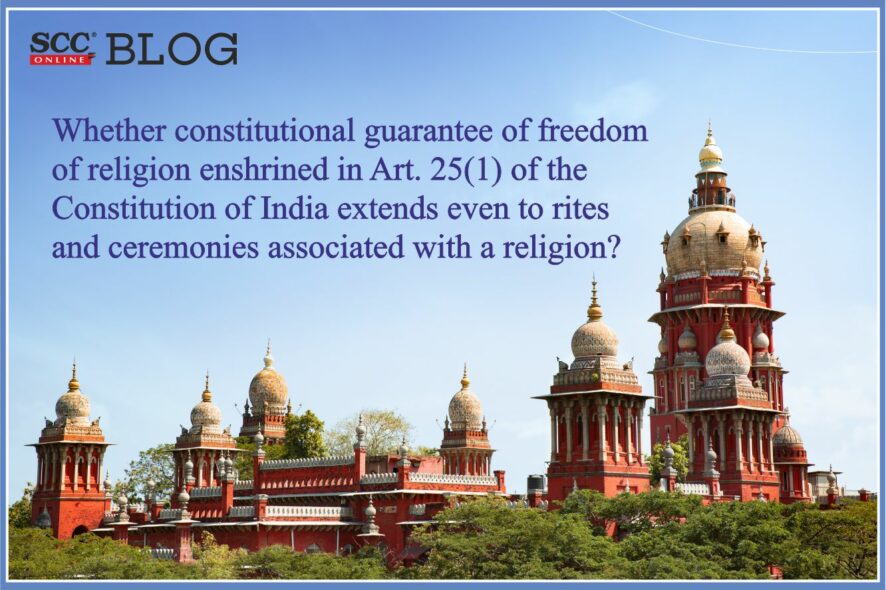 Madras High Court: Expressing that, the right of worship guaranteed under the Constitution to be respected by all concerned and devotees cannot be denied their right to worship under any circumstances, S.M. Subramaniam, J., held that every devotee has got a right to enter into the temple and worship Lord Sri Varadaraja Perumal in the way he likes without affecting the rights of other devotees/worshippers and temple activities.

A petition was filed questioning the validity of the notice issued by the 3rd respondent/Assistant Commissioner/Executive Trustee proceedings.

In order to regulate the Temple activities including observance of poojas and rituals, the third respondent issued a Circular.

Petitioner contended that the said Circular impugned violated the fundamental right of worship by Vadagalai Sect and performance of their recitals in the temple.

It was not disputed that the Thengalai Sect enjoyed primacy over chanting of their initial recitals namely Srisaila Dayapathram and Prabandhams. The right of the Vadagalai equally to worship their Guru and God alone is to be considered.

“The religious rite guaranteed under the Constitution must be provided to all concerned and discrimination or denial of religious practices, at no circumstances, be allowed by the Courts.”

High Court expressed that, a religion may not only lay down a code of ethical rules for its followers to accept, but may also prescribe rituals and observations, ceremonies and modes of worship, which were regarded as an integral part of the religion.

Therefore, the constitutional guarantee of freedom of religion enshrined in Article 25(1) extends even to rites and ceremonies associated with a religion.

In the instant case, prohibition of Thengalai Sect from chanting their initial recital namely Srisaila Dayapathram and Prabandham is in dispute.

Bench added that the third respondent was empowered to regulate the affairs of the temple and to maintain decorum in all respects and at all ties including while performing the rituals, poojas, etc., equally the protection given under Articles 25 and 26 extends to a guarantee for rituals and observances, ceremonies and modes of worship, which are integral part of religion or religious practice and it has to be decided by the Court with reference to the doctrine of a particular religion or practices regarded as parts of religion.

Hence, the sentiments of both Vadagali and Thengalai Sects are to be respected and mutual respect between them is also of paramount importance.

“Tolerance is the hall mark principle in Hinduism.”

The Court elaborated that the mutual understanding and respect and glorify the Lord alone will preserve the sanctity of the temple activities and therefore, both the sects were expected to do services to Lord Sri Varadaraja Perumal instead of fighting on trivial issues, as the rights and duties are corresponding, and every fundamental right is subject to restrictions so as to maintain public order in Temple administration and its activities.

“Every religious right is subject to public order. Persons violating the provisions of the Act and Rules are liable to be prosecuted.”

Adding to the above observations, Court stated that third respondent is empowered to regulate the Temple activities and the due observance of religious rites and ceremonies performed in the temple.

In Court’s opinion, the impugned order was in consonance with the provisions of the Statutes.

“…religious rights of devotees, worshipers, are to be protected. The guarantee under Articles 25 and 26 for the rituals and observance, ceremonies and modes of worship, which all are integral part of religious practices, are also to be taken into consideration by the Courts.”

The Court observed that, the right of primacy to chant initial recital and Prabandham by the Thengalai sect was not disputed by the Vadagalai sect. The Vadagalai sect were ready and willing to co-operate for peaceful observance of rituals without affecting the rights of Thengalai Sect.

(1) The Thengalai sect shall be permitted to sit in first two or three rows inside the Temple and behind them, the Vadagalai sect and ordinary devotees shall be permitted to sit in the remaining available space inside the Temple. The seating arrangements shall be regulated by the 3rd respondent/ Assistant Commissioner / Executive Trustee in such a manner without affecting discipline and decorum of the rituals and pooja activities.

(3) On completion of chanting of Naalayira Divya Prabandham by Vadagalai sect, Thengalai sect and ordinary devotees, jointly the final ritual namely Vazhithirunamam may be firstly chanted by Thengalai sect i.e., “Manavalamamunigal Vaazhithirunamam” and thereafter, the Vadagalai sect shall be allowed to recite their concluding Mantra i.e., “Desikan Vazhi Thirunamam” and accordingly, the entire process of rituals shall be concluded.

(4) The third respondent / the Assistant Commissioner / Executive Trustee is directed to Monitor the observance of rituals both by the Thengalai sect and Vadagalai sect and in the event of any violations of discipline and decorum, initiate all appropriate action in the manner known to law including penal actions.

(5) The third respondent / the Assistant Commissioner/ Executive Trustee is directed to make the above arrangements with immediate effect and videograph the events and produce the same before this Court during the next hearing, on 25.05.2022.

(6) The third respondent / the Assistant Commissioner/ Executive Trustee is directed to file a Compliance Report on 25.05.2022.