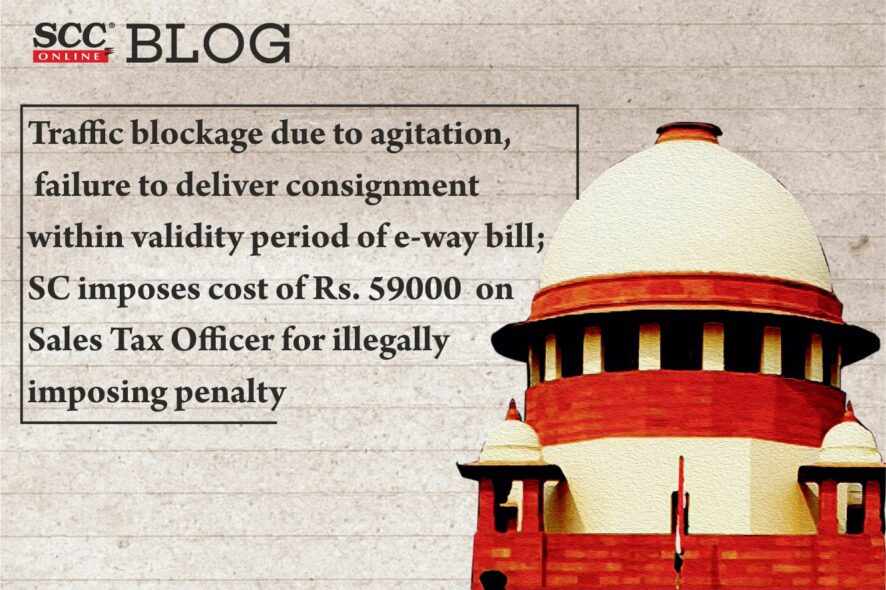 Supreme Court: While addressing the appeal against Telangana High Court’s order imposing costs of Rs. 10,000 on Asst. Commissioner of Sales Tax, the Division Bench of Dinesh Maheshwari and Hrishikesh Roy, JJ., refused to interfere with well-considered and well-reasoned order of the High Court and instead proceeded to enhance the cost by Rs. 59000. The Bench remarked,

“…error, if any, on the part of the High Court, had been of imposing only nominal costs of Rs. 10,000 on the respondent…”

The Bench held that the attempted inference on the part of the respondent that the writ petitioner was evading tax because the e-way bill had expired a day earlier was not only baseless but also the intent behind the proceedings against the petitioner were questionable per se, particularly when it was found that the goods in question, after being detained were strangely kept in the house of a relative of the respondent for 16 days and not at any other designated place for their safe custody.

The respondent-petitioner, a Private Limited Company had made an intra-State supply of paper to M/s. Sri Ayappa Stationery and General Stores and had also generated an e-way bill dt.04-01-2020. The goods were delivered to a transporter for making delivery to the consignee by an auto trolley however, due to Anti CAA protest traffic was blocked and the auto trolley driver could not make the delivery, next day being Sunday the driver took the trolley for delivery on the next working day, i.e. 06-01-2020.

It was the case of the petitioner that the auto driver was wrongfully detained by the Deputy State Tax Officer alleging that the validity of the e-way bill had expired proposing to impose tax and penalty. The petitioner revealed that the paper boxes were unloaded by the appellant-respondent at a private premises in the house of respondent’s relative without tendering any acknowledgment of receipt of detention of the goods in his custody, and subsequently, the auto trolley driver was released.

“We deprecate the conduct of respondent in not even adverting to the response given by petitioner to the Form GST MOV-07 in Form GST MOV-09 and his deliberate intention to treat the validity of the expiry on the e-way bill as amounting to evasion of tax without any evidence of such evasion of tax by the petitioner.”

Approving the reasoning of the High Court, the Bench said,

“The analysis and reasoning of the High Court commends to us, when it is noticed that the High Court has meticulously examined and correctly found that no fault or intent to evade tax could have been inferred against the writ petitioner.”

However, on the amount of costs the Bench opined that it was rather on the lower side considering the overall conduct of the respondent and the corresponding harassment faced by the writ petitioner. Accordingly, the Bench imposed a further sum of Rs. 59,000 on the appellant-respondent toward costs, to be paid to the writ petitioner over and above the sum of Rs. 10,000 already awarded by the High Court.

Lastly, opining that even the instant appeal was misconceived, the Bench made it clear that the State would be entitled to recover the amount of costs, after making payment to the writ petitioner, directly from the person/s responsible for the entirely unnecessary litigation.

Kamini Sharma, Editorial Assistant has out this report together 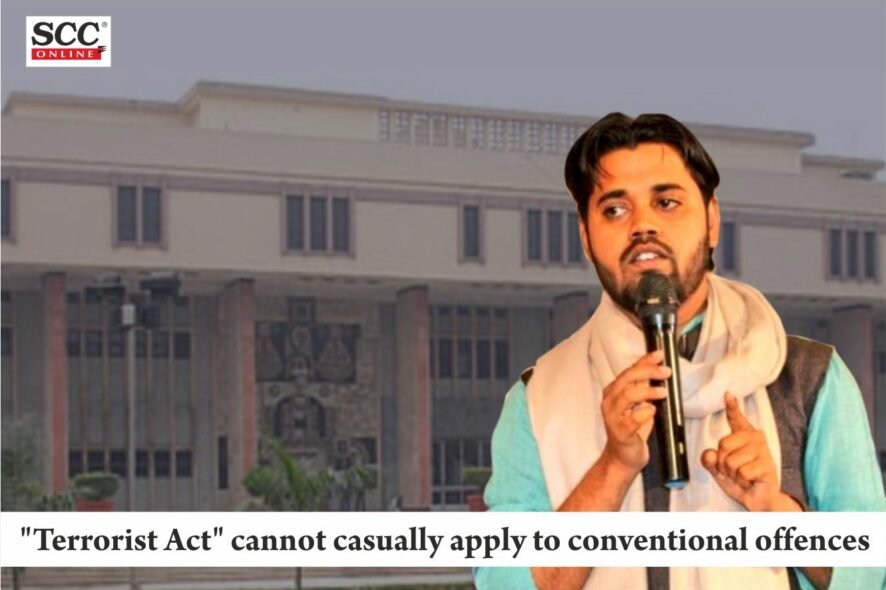 Delhi High Court: The Division Bench of Siddharth Mridul and Anup Jairam Bhambhani, JJ., granted bail to Asif Iqbal, who was booked under provisions of the UAPA Act for his role in the Delhi Riots during the anti-CAA protest last year.

Asif Iqbal Tanha, a 25-year old student filed the instant appeal under Section 21(4) of the National Investigation Agency Act, 2008 seeking bail as he was in judicial custody since 19-05-2020 under provisions of Penal Code, 1860, Prevention of Damage to Public Property Act, 1984 and Unlawful Activities (Prevention) Act, 1967.

Appellant was alleged to be one of the main conspirators as well as instigators behind the riots that occurred in North-East Delhi and played an active role in the conspiracy.

Right to Protest | Part of Fundamental Rights under Constitution of India

“48. …Undoubtedly, holding peaceful demonstrations by the citizenry in order to air its grievances and to ensure that these grievances are heard in the relevant quarters, is its fundamental right.”

“…Question is not as to whether the issue raised by the protestors is right or wrong or it is justified or unjustified. The fundamental aspect is the right which is conferred upon the affected people in a democracy to voice their grievances. Dissenters may be in minority. They have a right to express their views.”

“31. The right of citizens to take out processions or to hold public meetings flows from the right in Article 19(1)(b) to assemble peaceably and without arms and the right to move anywhere in the territory of India.”

Bench noted that in the present matter, there was nothing to show that Government prohibited the protest.

The said phrase must partake of the essential character of terrorism and the phrase ‘terrorist act’ cannot be permitted to be casually applied to criminal acts or omission that fall squarely within the definition of conventional offences.

Where the court finds that an act or omission is adequately addressed and dealt with by the ordinary penal law of the land, the court must not countenance a State agency ‘crying wolf’.

Bench opined that no offence under Sections 15, 17 or 18 UAPA was made-out against the appellant on a prima facie appreciation of the subject charge-sheet and the material collected and cited by the prosecution, the additional limitations and restrictions for grant of bail under Section 43D(5) UAPA do not apply.

With regard to outlining the consideration for bail, Court referred to the following significant decisions of the Supreme Court in:

Therefore, applying the well-worn principles of bail, Court held that it is not prima facie convinced of the veracity of the allegations so made and hence granted regular bail subject to conditions.[Asif Iqbal Tanha v. State (NCT of Delhi), 2021 SCC OnLine Del 3253, decided on 15-06-2021]