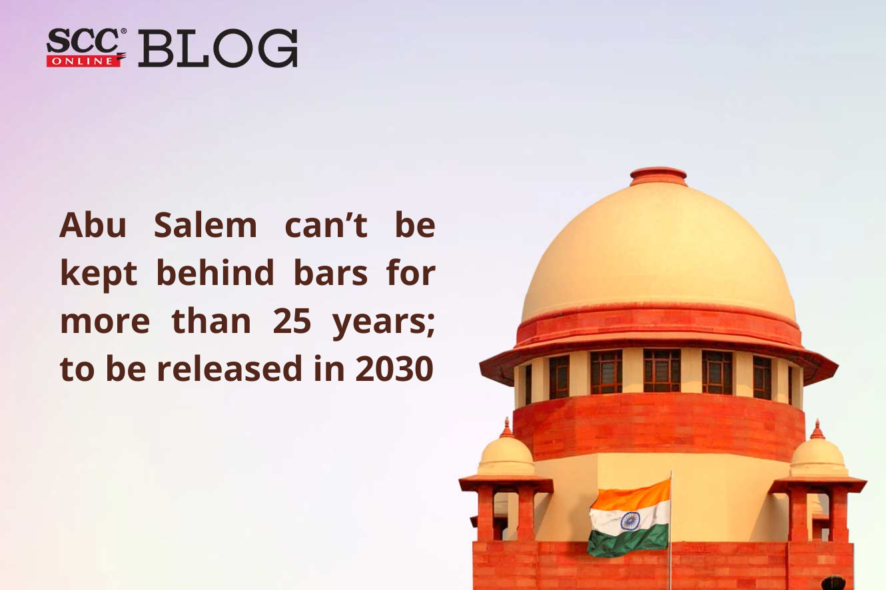 Supreme Court: In a big development, the bench of Sanjay Kishan Kaul* and MM Sundresh, JJ has directed that the infamous gangster/terrorist Abu Salem be released after the completion of 25 years of his sentence in terms of the national commitment as well as the principle based on comity of courts. Salem was convicted on 12.10.2005.

Crucial Facts to understand the decision

Why he needs to be released after completion of 25 years of sentence?

Hence, the necessary papers be forwarded within a month of the period of completion of 25 years sentence of Salem.

Why did the Supreme Court gave this judgment 5 years before the completion of 25 years of Salem’s sentence?

The Court found it necessary to make this time bound decision so that it does not result in an unending exercise and, thus, the Government of India must exercise the aforesaid powers or render advice on which the President of India is expected to act, within a month of the period of completion of sentence.

“We say so also to respect the very basis on which the Courts of Portugal observed the principles of comity of courts by recognising that there is a separation of powers in India and, thus, the Courts cannot give any assurance. The corresponding principle of comity of courts, thus, has to be observed such that the Government of India having given the solemn assurance, and having accepted the same before us, is bound to act in terms of the aforesaid. We are, thus, taking a call on this issue now and do not want to leave it to any uncertainty in future. This is of course subject to any aggravating aspect of the appellant.”

Why the plea of set off did not impress the Court?

It was argued before the Court that the set off period should commence from 18.09.2002 when Salem was arrested pursuant to the Red Corner notice, or at worst from 28.03.2003, i.e., the date of the ministerial order when extradition was granted to Salem for various offences.

However, the Court observed that

“It cannot be lost sight that when reference is made in a set off for adjustment of periods, the reference is to proceedings within the country. The criminal law of the land does not have any extra-territorial application. Thus, what happens in another country for some other trial, some other detention, in our view, would not be relevant for the purposes of the proceedings in the country.”

In the case at hand, Salem was charged with having a fake passport and was convicted of sentence from 18.09.2002. This had nothing to do with the proceedings against him in India. His sentence would have been completed on 18.03.2007 de hors the aspect of remission or commutation. However, he was granted conditional release for the remaining sentence on 12.10.2005.

“The mere fact that there was also a detention order under the Red Corner notice was of no significance. He was again imprisoned from 12.10.2005 till 10.11.2005, i.e. when he was handed over to the Indian authorities. The period till 10.12.2005, when he was serving out the sentence, certainly could not have been counted. That leaves the period of less than a month only, which is really more of an academic exercise.”

Hence, if one looks from the perspective of detention of the case in India, the period commences only on his being detained at Portugal on 12.10.2005, albeit giving him benefit of a little less than one month. 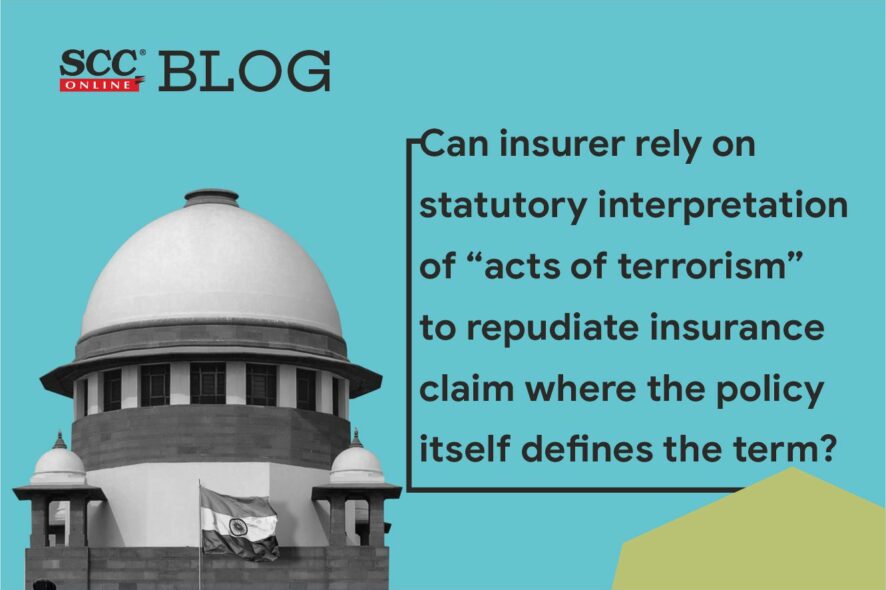 Supreme Court: In an insurance repudiation case the Division Bench of Ajay Rastogi and Abhay S. Oka*, JJ., held that where the insurance policy expressly defines a term the insurance company cannot rely on Statutory interpretation of the same to repudiate the insurance claim.

The appellant had taken Standard Fire and Special Perils Policy from the insurance company in respect of his Engineering Workshop and Plant. The total sum assured was Rs.26,00,00,000 under the policy covering the loss on account of fire, lightning, explosion, riots, strike etc.

As per the claim made by the appellant, after midnight of 22-03-2010, about 50­60 antisocial people with arms and ammunition entered the factory premises of the appellant and caused substantial damage to the factory, machinery, and other equipment. The mob demanded money and jobs for local people. The appellant contended that the object of the incident was to terrorise the management of the appellant and workers in the factory by forcing them to pay a ransom to the miscreants.

The Exclusion Clause of the policy defined the act of terrorism as—“the actions can be termed as acts of terrorism provided the same are committed for political, religious, ideological or similar purposes.   The words ‘similar purposes’ will have to be construed ejusdem generis.”

Noticeably, the repudiation of the policy was based on the Preliminary Survey Report, Investigation Report, and the Final Survey Report.   However, the Court noted that the Survey Reports could not throw any light on the question whether there was an act of terrorism, the Investigation Report did not conclusively prove that the persons involved in the incident belonged to Maoist or similar groups. Similarly, the FIR and Closure Report did not refer to acts of terrorism as defined under the Exclusion Clause, rather it showed that the police had registered a case against 105 miscreants who could not be traced.

Therefore, the Court held that the insurance company had not discharged the burden of bringing the case within the four corners of the Exclusion Clause.

The insurance company had argued that since the police had invoked Section 17 of the Criminal Law (Amendment) Act, 1908 against the miscreants for unlawful association, the very fact that the provisions of the Amendment Act of 1908 had been applied showed that the loss caused to the appellant was due to a terrorist act. The Court, rejecting the contention of the insurance company held,

Thus, the Court concluded that the NCDRC had committed an error by applying the Exclusion Clause. The policy specifically covered the damage caused by riots or violent means. Hence, the Court held that the decision to repudiate the policy could not be sustained.

Resultantly, the impugned order was set aside. However, noting that adjudication would have to be made on the quantum of the amount payable to the appellant after appreciating the evidence on record, including the valuation reports, the Court remanded the matter to the NCDRC for reconsideration. Further, relying on the expected damage estimated by the insurance company’s valuer, the Court directed the insurance company to deposit a sum of Rs.89,00,000 with the NCDRC with liberty to the appellant to make an application for withdrawal.

For the Appellant: Santosh Kumar, Advocate