Andhra Pradesh High Court:  Taking a stern stand against several instances of abuse of power by the Andhra Pradesh State Government, the Division Bench of Rakesh Kumar and D. Ramesh, JJ., reprimanded the Government for its high- handedness in dealing with matters concerning the rights of the people of Andhra Pradesh and making attempts at subduing the constitutional bodies such as the Legislative Council, State Election Commission and the Andhra Pradesh High Court itself. Rakesh Kumar, J., who authored the instant Order, minced no words while berating the State Government’s arbitrary actions- “The State by way of filing the interlocutory application, has ventured to malign the image of one of the Members of this Bench (Hon’ble Sri Justice Rakesh Kumar). It is very difficult for me to swallow the allegation of deviating from the principle of impartiality. With a view to uphold the majesty of law and repose the confidence of citizen in the judicial system, such endeavour made by the State is considered as malicious and cannot be approved. If such petitions are entertained, it will amount to allowing the party for hunting the Bench…. the Court cannot be frightened by any such action of the State”.

Background and Trajectory of the Issue: The writ petition WP (PIL) 127/2020 was filed with a prayer to declare the action of the Government of Andhra Pradesh/ Municipal Administration and Urban Development Department in issuing Notice Inviting Offer to an outright sale of land/land assets available at Guntur and Visakhapatnam for Mission Build AP on “as is where is” basis through E-auction, as illegal and arbitrary. The writ was first taken up by the Division Bench comprising A.V. Sesha Sai and B. Krishna Mohan, JJ., and while granting time for filing a counter-affidavit, passed an interim order restraining finalization of the bidding process. In the meanwhile, other similar writ petitions were filed questioning the act of the State regarding selling/transferring of the Government land through auction. On 16-12-2020, Sudhakar Reddy, A.A.G., filed a petition for recusal of Rakesh Kumar, J., from the case on the ground that the Judge had made an observation while hearing the matter which implied that he will ‘declare a break down of constitutional machinery in the State and hand over the administration to the Central Government’.

Observations: While denying that the aforementioned observation was ever made by him, Rakesh Kumar, J., sternly noted that the instant application is a derogatory and contemptuous act by the State Government. The function of the High Court while exercising jurisdiction under Art. 226 of the Constitution, is to protect and enforce the fundamental right of a citizen if it is infringed or taken away by the State. This is the main protection lying in the hands of the citizen against the unauthorized or illegal act of a State. If the Court has doubts over any issue, then it is its right to ask certain questions. “Honesty, integrity, sincerity, fearlessness and impartiality all are essence of judicial system in general and Judges in particular. If any question is raised without any reasonable basis, the Judge has every right to refer to any undisputed fact even not on record of the said proceeding in his defence”.

Rakesh Kumar, J., went on to make some specific and scathing observations regarding the current attitude of maligning the Judiciary, and the Andhra Govt.’s malicious intent towards the constitutional bodies, especially the A.P. HC. Some of the notable observations are as follows-

With the aforementioned observations, Justice Kumar stated that, “It appears that in the aforesaid background, now in the present proceeding, the State by way of filing the interlocutory application, has ventured to malign the image of one of the Members of this Bench”. Accordingly, the prayer for recusal was rejected as, “such prayer is totally untenable and malicious. If Court starts entertaining such petitions; in no case, the Court can be allowed to dispense justice”. In the concluding remarks, the Court stated that the above observations are specifically for considering the prayer for recusal made in this interlocutory application and not on the merits of the case.[Special Officer v. Thota Suresh Babu,2020 SCC OnLine AP 2143, decided on 30-12-2020] 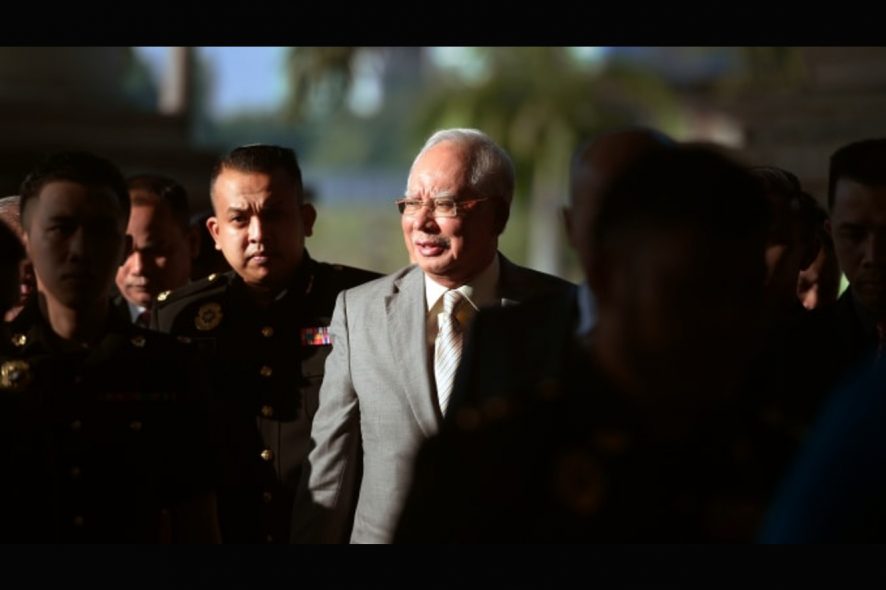 Kuala Lumpur High Court: Popularly called as the “Man of Steal” by his critics, former PM of Malaysia, Mr. Najib Razak was sentenced to 12 years in prison for abuse of power, and 10 years in jail for each of six counts of money laundering and breach of trust. The sentences are to run concurrently. Additionally he has to pay a fine of nearly $50 million. Mohamad Nazlan Mohamad Ghazali, J., rejected the argument that Mr. Najib received the money as a gift from a Saudi royal and that he was unaware of the balance in his own account. The Judge observed that, “After considering all evidence in this trial, I find that the prosecution has successfully proven its case beyond a reasonable doubt.”

There were several allegations against him like pilferation of government coffers to lead a luxurious life. Most importantly he was accused of transferring 42 million ringgit ($10m) from 1 Malaysia Development Berhad (1MDB) to his private accounts during his tenure as PM. The Fund was a sovereign wealth fund, set up in 2009, when Razak was the PM. Sovereign wealth funds are government-owned investment funds that are used to boost a country’s economic development. In 2015, questions were raised around 1MBD’s activities after it missed payments owed to banks and bondholders. Malaysian and US authorities allege that $4.5bn was illicitly plundered from the fund and diverted into private pockets.

The Court rejecting Mr. Najib’s defense that the theft was carried out without his knowledge by Jho Low, a wealthy Malaysian businessman, observed that, “It would be extraordinary that the accused as the then-prime minister and finance minister did not know it.” In rejecting Mr. Najib’s defense and questioning his credibility, the Judge cast doubt on whether the former prime minister’s legal strategy can be effective in his upcoming trials, which will focus on much larger amounts of money that went missing from 1MDB.

Uttaranchal High Court: A Bench of Ramesh Ranganathan, C.J. and Alok Kumar Verma, J. issued directions to the Government of Uttarakhand and the respondent Corporation to file an affidavit within the prescribed time with regard to the allegations made by the petitioner.

The Senior Counsel for the petitioner, B.P. Nautiyal, submitted that this loot of the public exchequer was being permitted to go unchecked ever since the State of Uttarakhand came into being till date; this facility of unlimited consumption of electricity was provided not only to an employee while he was in service but even after his retirement. In addition, this facility was being extended to his family members who were entitled to a family pension after his death. The petitioner also alleged that, in several cases, electricity meters, installed in the residence of employees, were non-functional; and, even in those few cases where the electricity meter was in order, meter reading was seldom resorted to.

D.S. Patni, Senior Counsel for the respondents, submitted that this benefit was extended only to employees in service and retired pensioners, and not to their family members.

The Court opined that while employees of the Corporation could be provided electricity at concessional rates within prescribed limits, it was disconcerting that the Power Corporation was squandering public money by supplying unlimited electricity to all its employees, and those employed in the Generating and Transmission Corporation also. The financial burden, for this unreasonable largesse, was being borne by the general public of the State of Uttarakhand, resulting in their having to pay a higher rate for each unit of electricity consumed by them.

The Court directed that a comprehensive audit be caused by the respondent-corporation’s books of accounts, including the expenditure incurred by it in supplying unlimited electricity, virtually free of cost, to its serving employees and those who have retired from service, and officers and employees of other Corporations. The respondent counsel stated that the respondent-corporation would examine the feasibility of placing limits on consumption of electricity by its employees either in terms of value or in terms of the units consumed. Deeming it necessary to ascertain the views of the State Government in this regard, the Court found it appropriate to, suo-motu, implead the Government of Uttarakhand represented by its Secretary, Energy as the fourth respondent in the writ petition. The Secretary, Energy, Government of Uttarakhand was ordered to file an affidavit explaining the rationale in permitting such unlimited consumption of electricity when such benefits were not being provided to other categories of Government servants. [RTI Club Uttarakhand v. Uttarakhand Power Corporation Ltd., 2019 SCC OnLine Utt 1261, decided on 06-11-2019]

Madhya Pradesh High Court: G.S. Ahluwalia, J., dismissed a petition filed under Article 226 Constitution of India to direct the respondents to register an FIR on the basis of the complaint made by her.

The main question before the High Court to decide was ‘whether a writ petition under Article 226 of the Constitution of India for registration of the FIR is tenable or not?’

The Supreme Court in the case of Divine Retreat Centre v. State of Kerala, (2008) 3 SCC 542 had held that the High Court in exercise of its power under Article 226 can always issue appropriate directions at the instance of an aggrieved person if the High Court is convinced that the power of investigation has been exercised by an investigating officer mala fide. That power is to be exercised in the rarest of the rare case where a clear case of abuse of power and non-compliance with the provisions falling under Chapter XII of the Code is clearly made out requiring the interference of the High Court. But even in such cases, the High Court cannot direct the police as to how the investigation is to be conducted but can always insist for the observance of the process as provided for in the Code. Even in cases where no action is taken by the police on the information given to them, the informant’s remedy would lie under Sections 190, 200 of CrPC, but a writ petition in such a case cannot be entertained.

Similarly, in the case of Lalita Kumari v. Government of U.P., (2014) 2 SCC 1, the Supreme Court held that cases like these do not pertain to issue of entitlement to writ of mandamus for compelling the police to perform statutory duty under Section 154 CrPC without availing alternative remedy under Sections 154(3), 156(3), 190 and 200 of CrPC.

Therefore, the Court finally dismissed the petition as the petitioner still had an efficacious and alternative remedy of filing a criminal complaint before the Court of competent jurisdiction.[Mamta Prajapati v. State of Madhya Pradesh, 2019 SCC OnLine MP 2477, decided on 06-09-2019]

On Day 7 of the Aadhaar hearing, Senior Advocate Shyam Divan summed up his submissions before the 5-judge bench of Dipak Misra, CJ and Dr. AK Sikri, AM Khanwilkar, Dr. DY Chandrachud and Ashok Bhushan, JJ. Shyam Divan picked up from where he left on Day 6 i.e. arguing on the affidavit filed by a fieldworker on the Jharkhand NREGA program recounting starvation deaths that occurred in Jharkhand because of Aadhaar linking failures.

Below are the highlights from Day 7 of the hearing:

Submission on affidavit on exclusion of people with leprosy:

Submission on no option to opt out of Aadhaar scheme:

Submission on whether an individual’s body belongs to her or to the State:

Looking for the detailed submissions of Senior Advocate Shyam Divan? Read the highlights from Day 1, Day 2, Day 3, Day 4 , Day 5 and Day 6 of the hearing.