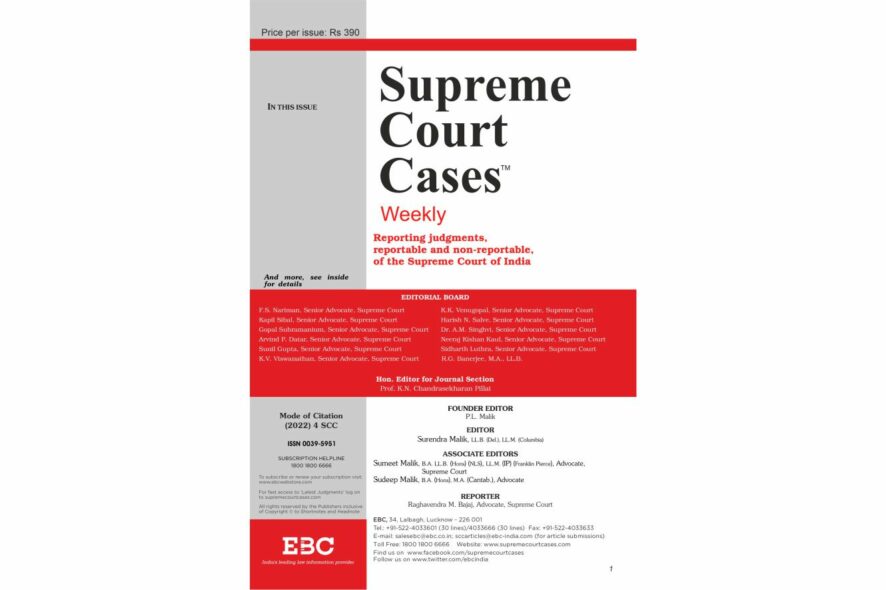 “It would be only a non speaking order which is an instance of violation of principles of natural justice. In such a case the prosecution or the informant has a right to assail the order before a higher forum.”

Civil Procedure Code, 1908 — S. 100 and Or. 9 R. 13 — Second appeal — Proper mode of disposal — Matters at large in second appeal — Ex parte decree: In this case, second appeal was filed against dismissal of first appeal for default on ground of delay, without any decision on merits in such first appeal. Only permissible course before High Court, held, was to consider validity of such first appellate order. High Court in second appeal, held, erred in treating the matter as an application under Or. 9 R. 13 and setting aside ex parte decree itself, and remanding suit to trial court for decision afresh on merit. [Mamtaz v. Gulsuma, (2022) 4 SCC 555]

Civil Procedure Code, 1908 — S. 25: In this case transfer petition was filed by wife and divorce proceedings were initiated by respondent husband in the Family Court at Chennai 600 km away from Hyderabad, where wife resides. Application of wife seeking transfer of proceedings to Hyderabad, allowed. [Pooja Rathod v. Tarun Rathod, (2022) 4 SCC 514]

Constitution of India — Arts. 25, 21, 14 and 19 — COVID-19 Pandemic — Funeral rights of Parsi Zoroastrian community: In this case, due to concern over public health and safety while preserving the sanctity of the Zoroastrian faith, funeral rights allowed under amicably agreed upon protocol and standard operating procedure (SOP) permitting the claim of Parsi Zoroastrian community to conduct their funeral rights in the Dokhma (Tower of Silence) while complying with the safety standards required during COVID-19 Pandemic. [Surat Parsi Panchayat Board v. Union of India, (2022) 4 SCC 534]

Criminal Procedure Code, 1973 — S. 439 — Grant of bail under S. 439 — Necessity of recording reasons — Extent to which reasons are required in a bail order — Principles clarified: Grant of bail under S. 439 though being a discretionary order, but, however, calls for exercise of such a discretion in a judicious manner and not as a matter of course and, thus, order for bail bereft of any cogent reason cannot be sustained. Therefore, prima facie conclusion must be supported by reasons and must be arrived at after having regard to the vital facts of the case and, thus, serious nature of accusations and facts having a bearing in the case cannot be ignored, particularly, when the accusations may not be false, frivolous or vexatious in nature but supported by adequate material brought on record so as to enable a court to arrive at a prima facie conclusion. [Brijmani Devi v. Pappu Kumar, (2022) 4 SCC 497]

Criminal Procedure Code, 1973 — S. 482 — Inherent powers under — Power of quashing of criminal proceedings — When should be exercised: Power of quashing of criminal proceedings should be exercised very sparingly and with circumspection and that too in rarest of rare cases and it is not justified for Court in embarking upon enquiry as to reliability or genuineness or otherwise of allegations made in FIR or complaint. Inherent powers do not confer any arbitrary jurisdiction on Court to act according to its whims and fancies. [Shafiya Khan v. State of U.P., (2022) 4 SCC 549]

Employees’ Provident Funds and Miscellaneous Provisions Act, 1952 — Ss. 7-A and 14-B — Failure to deposit contribution — Imposition of damages for delayed payment: Breach of civil obligations/liabilities committed by employer is sufficient for imposition of penalty or damages. There is no further requirement on authority concerned to examine existence of element of actus reus/mens rea or to examine issue of justification, for imposing damages. [Horticulture Experiment Station v. Provident Fund Organization, (2022) 4 SCC 516]

Insurance — Contract of Insurance/Policy/Terms/Cover Note — Duties of parties/Uberrima Fides/Uberrimae Fidei/Claim to Insurance money/Insurer’s liability — Obligation to disclose material facts — Mutuality of: Principle of uberrimae fidei i.e. principle of utmost good faith, held, imposes meaningful reciprocal duties owed by the insured to the insurer and vice versa. That is to say, just as the insured has a duty to disclose all material facts, the insurer must also inform the insured about the terms and conditions of the policy that is going to be issued to him and must strictly conform to the statements in the proposal form or prospectus, or those made through his agents. [Manmohan Nanda v. United India Assurance Co. Ltd., (2022) 4 SCC 582]

Insurance — Contract of Insurance/Policy/Terms/Cover Note — Exemption/Exclusion/Restriction/Limitation/Forfeiture Clauses/Negative Covenants: Law surveyed in detail and general principles, summarized regarding when exemption clause may be given effect to, and when may be negated or not given effect to. [Shivram Chandra Jagarnath Cold Storage v. New India Assurance Co. Ltd., (2022) 4 SCC 539]

Insurance — General Insurance — Theft, Burglary and Property Loss Insurance: Delay in informing theft to insurer i.e. alleged violation of a condition of insurance contract in this regard is insufficient to deny claim of insured when FIR regarding theft lodged and also accused arrested and charge-sheeted i.e. when the claim is otherwise genuine and not disputed to be genuine by insurer. [Jaina Construction Co. v. Oriental Insurance Co. Ltd., (2022) 4 SCC 527]

Penal Code, 1860 — S. 34 — Applicability of — When attracted: To attract applicability of S. 34 prosecution is under obligation to establish that there existed common intention which requires prearranged plan. Before a person can be vicariously convicted for criminal act of another, act must have been done in furtherance of common intention of all. In absence of prearranged plan and thus a common intention, even if several persons simultaneously attack the man each one of them would be individually liable for whatever injury he caused and none could be vicariously convicted for act of any or the other. Thus, it is necessary either to have direct proof of prior concert or proof of circumstances which necessarily lead to that inference and incriminating facts must be incompatible with innocence of accused and incapable of explanation or any other reasonable hypothesis. [Indrapal Singh v. State of U.P., (2022) 4 SCC 631]

Service Law — Promotion — Entitlement to: In this case appellants were promoted as Assistant Director (Official Language) on ad hoc/officiating basis during years 1993-95 and 2000. High Court by impugned judgment recalled judgment dt. 4-11-2011 and affirmed order of Tribunal directing promotion of appellants in accordance with the 2002 Rules on ground that in Mishri Lal, (2011) 14 SCC 739 it was held that the 2002 Rules were not implemented. Said order was held unsustainable. [Medini C. v. BSNL, (2022) 4 SCC 562]

Service Law — Retirement/Superannuation — Retiral benefits — Delay in payment — Entitlement to interest: Where there is delay in paying retirement dues to retired employee, for no fault of his, he is entitled to interest on delayed payment. [A. Selvaraj v. C.B.M. College, (2022) 4 SCC 627]