Supreme Court: In an appeal filed by the Food Corporation of India (‘FCI’) against the judgment of Tripura high Court wherein it held that demurrages cannot be recovered as a charge by the corporation, the division bench of Pamidighantam Sri Narasimha* and AS Bonappa JJ. after examining the contract, held that the parties did not intend to include liability on account of demurrages as part and parcel of the expression “charges” in the contract between them.

Further, based on interpretation of the expression “charges” in the contractual context, it was opined that, it did not include liability on account of demurrages. Thus, the corporation cannot impose and collect demurrages from the contractors.

The Court while providing for intrinsic tools for interpreting a contract, said that interpretation of contracts concerns the correct intention of the parties to it and words and expressions used in the contract are principal tools to ascertain such intention. While interpreting the words, courts look at the expressions falling for interpretation in the context of other provisions of the contract and in the context of the contract as a whole. Further, courts do not resort to materials external to the contract for construing the intention of the parties, however, there are certain exceptions to this rule, for instance, in latent ambiguity, which cannot be resolved without reference to extrinsic evidence. Latent ambiguity exists when words in a contract appear to be free from ambiguity; however, when they are sought to be applied to a particular context or question, they are amenable to multiple outcomes.

Child’s custody under S. 25 of Guardians and Wards Act, 1980 would only be decided on basis of welfare of the child

Reported By Saba Published on September 12, 2017 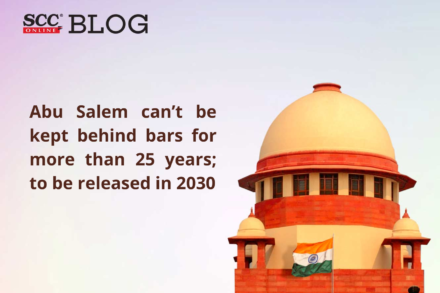 Abu Salem can’t be kept behind bars for more than 25 years, holds Supreme Court. Here’s why