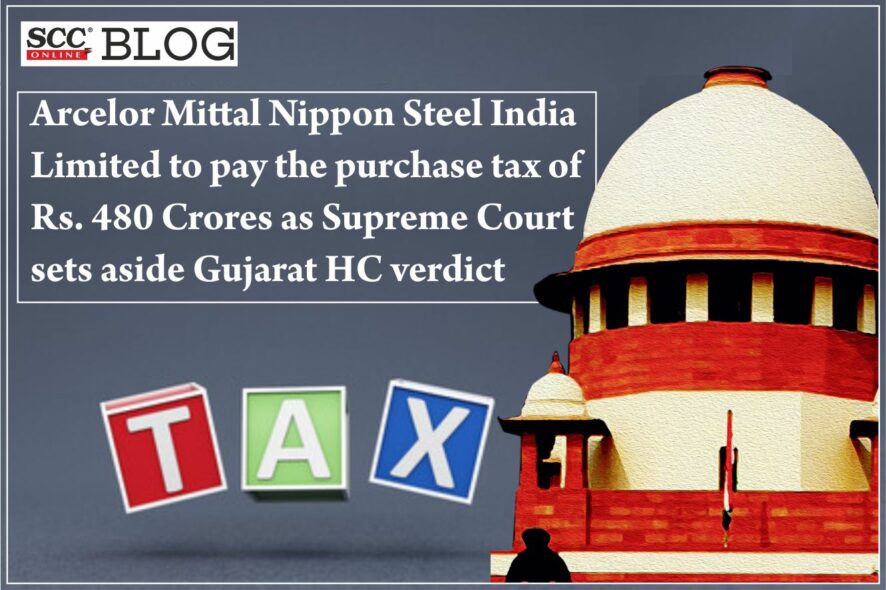 Supreme Court: In a major blow to Essar Steel Limited, now Arcelor Mittal Nippon Steel India Limited), the bench of MR Shah* and Sanjiv Khanna, JJ has set aside the Gujarat High Court verdict wherein it was held that Essar was entitled to the exemption from payment of purchase tax as per the Notification dated 05.03.1992, which was issued under Section 49(2) of the Gujarat Sales Tax Act, 1969. As a result Essar will now have to pay the purchase tax of Rs.480.99 crores.

The Government of Gujarat vide Resolution dated 26.07.1991 announced a scheme known as “The Scheme for Special Incentives to Prestigious Units 1990-95 (modified)” for attracting investments in core sector industries. Under the said scheme, a prestigious unit was eligible for incentives up to 90% of the fixed capital investment.

This exemption as per Entry No.255(2) vide Notification dated 05.03.1992 was subject to fulfilling following conditions:

Before adverting to the case at hand, the Court explained the scope of interpretation of a taxing statute and observed that the notification has to be read as a whole. If any of the conditions laid down in the notification is not fulfilled, the party is not entitled to the benefit of that notification. An exception and/or an exempting provision in a taxing statute should be construed strictly and it is not open to the court to ignore the conditions prescribed in industrial policy and the exemption notifications.

The exemption notification should be strictly construed and given meaning according to legislative intendment. The Statutory provisions providing for exemption have to be interpreted in the light of the words employed in them and there cannot be any addition or subtraction from the statutory provisions.

In the taxing statute, it is the plain language of the provision that has to be preferred, where language is plain and is capable of determining defined meaning. Strict interpretation to the provision is to be accorded to each case on hand. Purposive interpretation can be given only when there is an ambiguity in the statutory provision or it alleges to absurd results, which is so not found in the present case.

The Supreme Court observed that the Scheme of the Statute does not in any manner indicate that the incentive provided has to continue for the consecutive years irrespective of the fulfilling of the eligibility conditions.

Hence, Essar, the eligible unit was found not entitled to the exemption from payment of purchase tax under the original Entry No.255(2) dated 05.03.1992, firstly, on the ground that it did not fulfill the eligibility criteria/conditions mentioned in the original Entry No.255(2) dated 05.03.1992 and secondly that there was a breach of declaration in Form No.26 furnished by Essar.

The Court also rejected the contention that as in the earlier assessment years benefit of exemption was granted to the respondent and, therefore, in the subsequent assessment years also, despite the fact that it is found that the respondent was/is not eligible for the benefit of exemption under the original Notification/Entry No.255(2). The Court observed that if such a submission is accepted in that case it will be perpetuating the illegality and granting the benefit of exemption to ‘ineligible industry’, who did not fulfill and/or comply with the eligibility criteria/conditions mentioned in the exemption notification. The principle of promissory estoppel shall not be applicable contrary to the Statute.

“Merely because erroneously and/or on misinterpretation, some benefits in the earlier assessment years were wrongly given, cannot be a ground to continue the wrong and to grant the benefit of exemption though not eligible under the exemption notification.”

Supreme Court: Deciding the question as to whether the State Bank of India (SBI) and its branches, which are registered dealers under the Bengal Finance (Sales Tax) Act, 1941 would be liable to levy of purchase tax under Section 5(6a) of the Act for accepting the Exim Scrips (Export Import Licence) on payment of premium of 20 per cent of the face value of the scrips in compliance with the direction contained in the letter of Reserve Bank of India (RBI) dated 18th March, 1992, the bench of Dipak Misra and Shiva Kirti Singh, JJ held the SBI was not liable to levy of purchase tax under the Act.

The Court said that the replenishment licences or Exim scrips are “goods”, and when they are transferred or assigned by the holder/owner to a third person for consideration, they would attract sale tax.However, it was held that the SBI is an agent of the RBI, the principal. The SBI, when it took the said instruments as an agent of the RBI did not hold or purchase any goods. It was merely acting as per the directions of the RBI, as its agent and as a participant in the process of cancellation, to ensure that the replenishment licences or Exim scrips were no longer transferred. The intent and purpose was not to purchase goods in the form of replenishment licences or Exim scrips, but to nullify them. The “ownership” in the goods was never transferred or assigned to the SBI.

The Court further said that the initial issue or grant of scrips is not treated as transfer of title or ownership in the goods. Therefore, as a natural corollary, it must follow when the RBI acquires and seeks the return of replenishment licences or Exim scrips with the intention to cancel and destroy them, the replenishment licences or Exim scrips would not be treated as marketable commodity purchased by the grantor. [Commercial Tax Officer v. State Bank of India, 2016 SCC OnLine SC 1245 , decided on 08.11.2016]