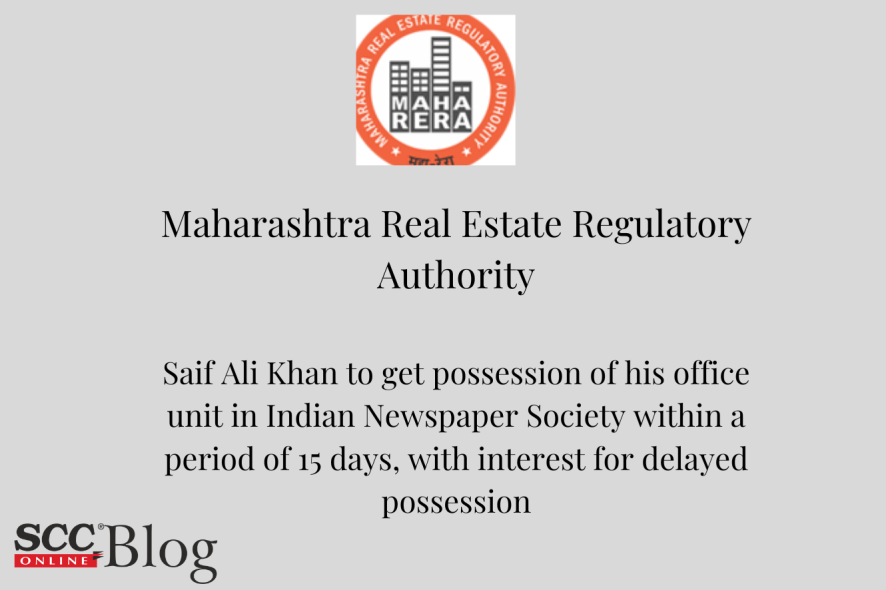 Maharashtra Real Estate Regulatory Authority: In a complaint filed for seeking directions to the respondent to handover the possession and to pay interest/ compensation for the delayed possession as per the provisions of section 18 of the Real Estate (Regulation & Development) Act, 2016 (‘RERA’), Mahesh Pathak (Member) has directed the respondent to handover possession of the said units to Saif Ali Khan-complainant within a period of 15 days from the date of this order and directed to pay interest for the delayed possession to Saif Ali Khan from 1.02.2018 till 12.02.2021. Further, the respondent is entitled to claim the benefit of “moratorium period” as mentioned in the Notifications issued by the Authority. Moreover, it directed Saif Ali Khan to pay interest for the delayed payment from the date of default till the actual date of payment at the rate prescribed under RERA i.e. Marginal Cost Lending Rate (MCLR) of SBI plus 2%.

It was submitted on behalf of Saif Ali Khan that he purchased an office in INS Building for total consideration of Rs. 28,00,00,000/. Thereafter, the respondent issued a letter of allotment dated 14/05/2008 to him, recording its intention to enter into an agreement for sale with him. Further, the respondent misled Saif Ali Khan into paying Rs. 13,00,00,000/- and Rs. 10,00,00,000 before execution of the agreements for sale instead of the stipulated 20% of the consideration. The possession of the units was to be given by 31.07.2017 but was not given and later the respondent has obtained the extension of time by deceit, thus, the completion date should be treated as 31/07/2017 and not 31/12/2019. Further, the respondent has failed to execute and register new agreements with him. Thus, he prayed for compensation along with interest at the rate of 18% from the date of filing this complaint till payment/realization thereof and to set off the amount due from him to the respondent and from demanding any further payments from him for the instalments due towards the sale price of the Units.

The Authority observed that the reasons of delay cited by the respondent do not give any plausible explanation, since, as a promoter of the project it was the obligation of the respondent to obtain all the requisite permissions for carrying out the construction work and Saif Ali Khan had nothing to do with the same. Moreover, if the project was getting delayed, in that event, the respondent should have informed him and revised the date of possession at the relevant time by executing the supplementary agreements for sale. Further, even if the reasons cited by the respondent are genuine, in that event, it is entitled to seek an extension of 6 months in the date of possession, as permissible under Maharashtra Ownership Flat Act, 1963 (‘MOFA’).

However, the Authority has noted that the respondent has completed the said project and obtained an occupancy certificate for Saif Ali Khan’s flats on 12-02-2021 and offered possession of the same to him, but it has not been taken by him, as he is alleging that the possession was not offered to him as per the agreements for sale and the interest amount payable by the promoter should have been adjusted towards the balance consideration amount payable by him, thus, it was observed that the said contention of Saif Ali Khan is uncalled for, since he should have taken possession of his units and could have made such grievances even after possession.

It was viewed that as the respondent has complied with its statutory liability to obtain occupancy certificate and offer the possession to Saif Ali Khan, thus, he is not entitled to seek any interest under section 18 of the RERA after the receipt of occupancy certificate for the said project.

For the Respondent: Advocate Vibhav Krishna

Bombay High Court: A Division Bench of Dipankar Datta, CJ and M.S. Karnik, J., disposed of a matter wherein the orders of Maharashtra Real Estate Regulatory Authority were in challenge.

Orders passed by Maharashtra Real Estate Regulatory Authority on 2nd April, 2020 and 18th May, 2020 have been challenged in the present public interest litigation at the instance of a citizen for the benefit of home buyers.

Petitioner submits that the impugned orders suspend certain provisions of the Real Estate (Regulation and Development) Act, 2016 and are arbitrary and illegal.

Real Estate (Regulation and Development) Act, 2016 is a complete code in itself dealing with regulation and promotion of the real estate sector, protection of the interests of the consumers and establishment of adjudicatory mechanism for speedy dispute redressal.

Section 44 of the said Act provides a remedy of appeal to any person against any direction or order or decision of the RERA before an Appellate Tribunal.

In the above view of the matter, home buyers for whose benefit the petitioner has instituted present PIL are not left without a remedy. If indeed any home buyer is aggrieved by the order or direction of the respondent no 1, he/she/it is free to approach the appellate forum.

MAHARera declared COVID-19 impacted period from March, 15 to September 14 as force majeure under the provisions of Real Estate (Regulation and Development) Act.