Delhi High Court: In an application filed by Aakash Choudhary (‘petitioner’) seeking anticipatory bail, as FIR was registered against him and Gaurav Singh /co-accused under Sections 308, 323, 341 read with 34 Penal Code, 1860 (‘IPC’), Justice Talwant Singh granted bail on the ground that the CCTV footage, prima facie does not support the allegations mentioned in the FIR, as far as the present applicants are concerned keeping in view that the applicants are ready to join the investigation.

The applicant claimed that the present FIR is a counter blast to the applicant’s FIR registered at PS Sarita Vihar, Delhi, registered under the influence of one Mr. Brahm Singh, who is the aggressor and husband of a local municipal councilor.

The Court opined that that the only reliable piece of evidence, which gives a clear picture of the incident is the CCTV footage of the entire incident, which was captured in a CCTV installed near the ground.

The Court noted that the altercation started on a very minor issue when the complainant stopped a tractor trolly for ferrying certain material to the park where they were going to host a Kabaddi tournament. On this minor issue, the incident escalated to a free for all fight, which resulted in injuries on both sides and rival groups have lodged the FIRs against other groups, alleging the facts, which best suited to them, without realizing that the entire incident was captured in a CCTV camera.

The Court further noted that the investigating agency is required to investigate the entire incident on the basis of scientific evidence, without relying upon exaggerated allegations made in both the FIRs and to conclude the investigation and take further action.

The Court directed the area DCP to ensure that an independent investigation is conducted into the incident and take steps as per law, without getting influenced by the stature or political background of any of the parties and to supervise the progress of the investigation at regular intervals and review the progress made so far.

But the Court made a very interesting observation while dealing with this matter. The Court remarked

“It has been noticed that in the bail applications, apart from stating the facts, elaborate extracts from judgements have been made part of the pleadings. The learned drafting counsel is requested to adhere to the basic principles of pleading and state only facts and the legal provisions applicable along with the grounds on which the bail has been sought. As far as the citations are concerned, the counsels are at liberty to cite all relevant judgements at the time of the arguments. There is no need to attach copies of the judgements with the pleadings, which results in making the pleadings too bulky.”

The Court granted anticipatory bail, subject to the following conditions:

(i) They shall join the investigation as and when called by the IO and fully cooperate in the same.

(ii) They shall not contact, coerce or threaten the complainant and the witnesses in the present case;

(iii) They shall share their Mobile Numbers with the IO within one week of the date of this order and keep the mobile location on at all times;

(iv) They shall not leave the country without permission from the learned Trial Court. 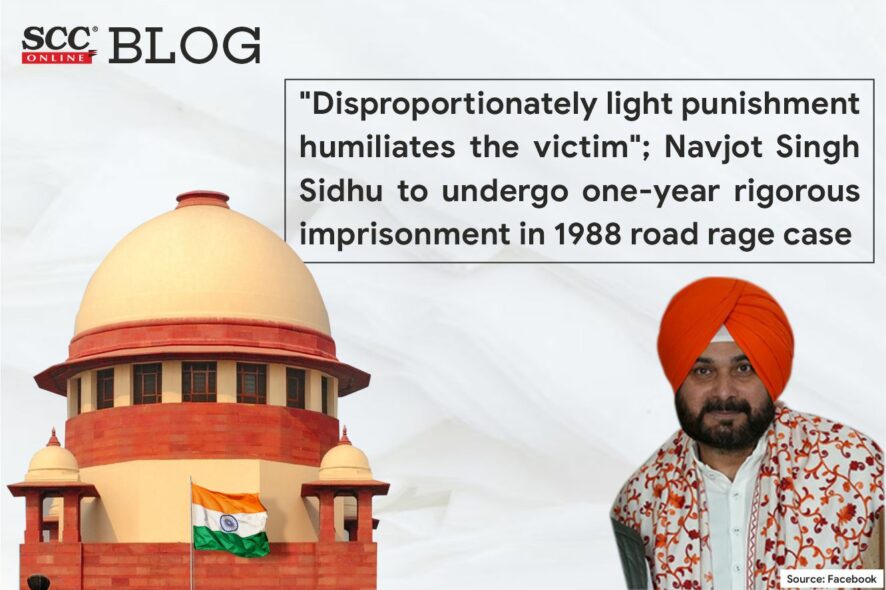 Supreme Court: Allowing the review petition in the 34-year-old road-rage case involving cricketer-turned-politician Navjot Singh Sidhu that resulted into the death of one 65-yer-old Gurnam Singh, the bench of AM Khanwilkar and Sanjay Kishan Kaul, JJ has imposed a sentence of one-year rigorous imprisonment on Sidhu in addition to the fine of Rs.1,000/- imposed in the order dated 15.05.2018.

In 1988, Sidhu got into a fight with the deceased over his right to way at a traffic light in Patiala. Sidhu had pulled the deceased out of his vehicle and inflicted fist blows. The incident eventually culminated in the death of Gurnam Singh. The Court, however, held that Sidhu had voluntarily caused hurt to Gurnam Singh punishable under Section 323 IPC.

While dealing with the review petition, the Court noticed that some material aspects which were required to be taken note of appear to have been somehow missed out at the stage of sentencing, such as the physical fitness of Sidhu as he was an international cricketer, who was tall and well built and aware of the force of a blow that even his hand would carry. The blow was not inflicted on a person identically physically placed but a 65-year-old person, more than double his age.

The Court observed that Sidhu cannot say that he did not know the effect of the blow or plead ignorance on this aspect.

“It is not as if someone has to remind him of the extent of the injury which could be caused by a blow inflicted by him. In the given circumstances, tempers may have been lost but then the consequences of the loss of temper must be borne.”

The Court went on to state that to some extent it had been indulgent in ultimately holding Sidhu guilty of an offence of simple hurt under Section 323 of the IPC.

Observing that the hand can also be a weapon by itself where say a boxer, a wrestler or a cricketer or an extremely physically fit person inflicts the same, the Court said that,

“When a 25-year-old man, who was an international cricketer, assaults a man more than twice his age and inflicts, even with his bare hands, a severe blow on victim’s head, the unintended consequence of harm would still be properly attributable to him as it was reasonably foreseeable. That it would cause the death of a person is another matter since the conviction is only under Section 323 of the IPC. Even though any harm might not be directly intended, some aggravated culpability must be attached if the person suffers a grievous hurt or dies as a result thereof.”

On the aspect of sentencing, the Court said that a disproportionately light punishment humiliates and frustrates a victim of crime when the offender goes unpunished or is let off with a relatively minor punishment as the system pays no attention to the injured’s feelings.

“The society cannot long endure under serious threats and if the courts do not protect the injured, the injured would then resort to private vengeance and, therefore, it is the duty of every court to award proper sentence having regard to the nature of the offence and the manner in which it was executed or committed.”

Supreme Court: The bench of J. Chelameswar and SK Kaul, JJ held that Cricketer-turned-Politician Navjot Singh Sidhu cannot be held guilty for the death of one Gurnam Singh in the 30-year-old case wherein Sidhu got into a fight with the deceased over his right to way at a traffic light in Patiala. Sidhu had pulled the deceased out of his vehicle and inflicted fist blows. The incident eventually culminated in the death of Gurnam Singh. The Court, however, held that Sidhu had voluntarily caused hurt to Gurnam Singh punishable under Section 323 IPC.

“No   doubt   that   there   are   lapses   in   the   investigation.   We cannot hazard a guess whether such lapses occurred because of the general inefficiency of the system or as a consequence of a concerted effort made to protect the accused.   The law of this country is not that people are convicted of offences on the basis of doubts.”

The Court said that even if it is assumed that Sidhu admitted to his participation in the   occurrence, in the light of the medical evidence on record, he cannot be held guilty of causing the death of Gurnam Singh.