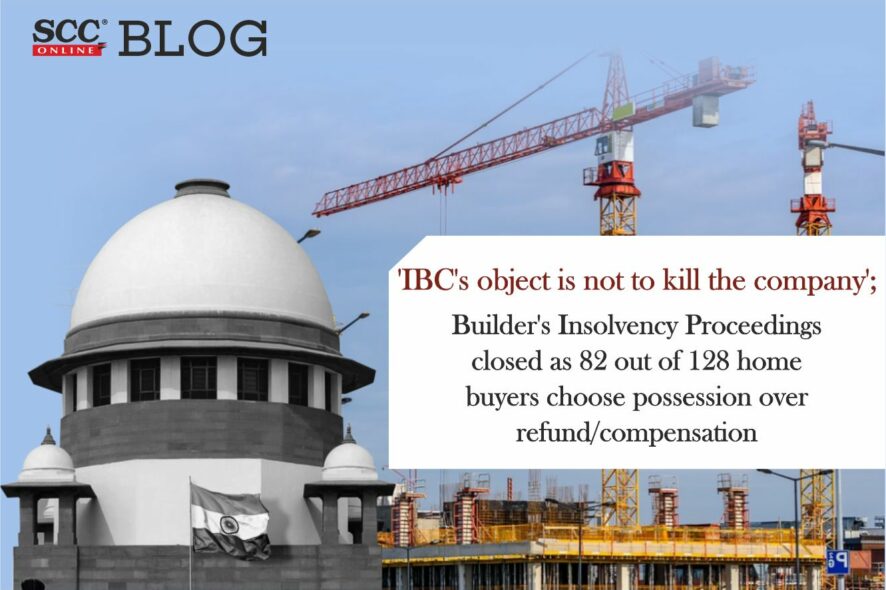 Supreme Court: In a case where out of the total 128 home buyers, 82 were against the insolvency proceedings of the Corporate Debtor of a Gurgaon based housing project, the bench of MR Shah* and BV Nagarathna, JJ has allowed the original applicants (three home buyers) to withdraw the CIRP proceedings as the same shall be in the larger interest of the home buyers who are waiting for the possession since more than eight years. The Court observed that this decision will also be in line with the object and purpose of the IBC i.e. not to kill the company and stop/stall the project, but to ensure that the business of the company runs as a going concern.

The Court noticed that although the COC was constituted on 23.11.2020, there has been a stay of CIRP proceedings on 3.12.2020 (within ten days) and no proceedings have taken place before the COC. Also, the COC comprises 91 members, of which 70% are the members of the Flat Buyers Association who are willing for the CIRP proceedings being set aside, subject to the Corporate Debtor company honouring the settlement plan.

In such facts and circumstances, where out of 128 home buyers, 82 home buyers will get the possession within a period of one year, as undertaken by the appellant and Corporate Debtor, coupled with the fact that original applicants have also settled the dispute with the appellant/Corporate Debtor, the Court was of the opinion that it was a fit case to exercise the powers under Article 142 of the Constitution of India read with Rule 11 of the NCLT rules, 2016 and to permit the original applicants to withdraw the CIRP proceedings.

“Most often, resolution plans provide for high percentage of haircuts in the claims, thereby significantly reducing the claims of creditors. Unlike other financial creditors like banks and financial institutions, the effect of such haircuts in claims for refund or delayed possession may be harsh and unjust on homebuyers.”

On the other hand, if the CIRP fails, then the builder-company has to go into liquidation as per Section 33 of the IBC. The homebuyers being unsecured creditors of the builder company stand to lose all their monies that are either hard earned and saved or borrowed at high rate of interest, for no fault of theirs.

The Court further explained the legislative intent behind the amendments to the IBC which is to secure, protect and balance the interests of all home buyers. The interest of home buyers is protected by restricting their ability to initiate CIRP against the builder only if 100 or 10% of the total allottees choose to do so, all the same conferring upon them the status of a financial creditors to enable them to participate in the COC in a representative capacity.

(1) The entire project shall be completed within one year from 01.03.2022 and respective home buyrers shall be offered the possession;

(2) Corporate Debtor shall complete the entire project including all the apartments, common areas, amenities, etc. as specified in the ABA;

(3) all demands be raised and timely paid, strictly in terms of ABA;

(4) Company shall continue the provisions of all maintenance services as per the ABA; and

(5) Company will make the application for obtaining Occupancy Certificate within six months, before the competent authority.

Bombay High Court: A Division Bench of Dipankar Datta, CJ and M.S. Karnik, J., disposed of a matter wherein the orders of Maharashtra Real Estate Regulatory Authority were in challenge.

Orders passed by Maharashtra Real Estate Regulatory Authority on 2nd April, 2020 and 18th May, 2020 have been challenged in the present public interest litigation at the instance of a citizen for the benefit of home buyers.

Petitioner submits that the impugned orders suspend certain provisions of the Real Estate (Regulation and Development) Act, 2016 and are arbitrary and illegal.

Real Estate (Regulation and Development) Act, 2016 is a complete code in itself dealing with regulation and promotion of the real estate sector, protection of the interests of the consumers and establishment of adjudicatory mechanism for speedy dispute redressal.

Section 44 of the said Act provides a remedy of appeal to any person against any direction or order or decision of the RERA before an Appellate Tribunal.

In the above view of the matter, home buyers for whose benefit the petitioner has instituted present PIL are not left without a remedy. If indeed any home buyer is aggrieved by the order or direction of the respondent no 1, he/she/it is free to approach the appellate forum.

MAHARera declared COVID-19 impacted period from March, 15 to September 14 as force majeure under the provisions of Real Estate (Regulation and Development) Act.

Supreme Court: The bench of Arun Mishra and UU Lalit, JJ directed the banks and financial institutions to release loans to home buyers of Amrapali Group, whose loans have been sanctioned, notwithstanding the fact that their accounts are declared as Non-Performing Assets (NPAs).

“Let there be restructuring of the loan amount. It may be released under the current norms of the RBI for releasing loans and the rates fixed by the RBI therefor.”

The Court further said that the disbursement of further loans may be based on the present rate of interest fixed by the RBI; this we order in the peculiar facts of the case. It may be released stage-wise and long-term restructuring of the loans may be done so that construction is completed and buyers are able to repay the loan.

Earlier, ASG Vikramjit Banerjee had submitted before the Court that that RBI instructions do not come in the way of releasing home buyers’ loans whose accounts are NPAs and that the banks were ready to release the loan to the home buyers.

Considering the fact that the housing projects have been stalled for the last several years, the Court noticed that the home buyers have obtained loans but cannot enjoy the fruits of their investment. At the same time, if projects are not completed and home buyers are not sure of handing over of flats, it would be difficult for them to pay bank dues till eternity and it is in the interest of home buyers as well as banks and financial institutions as they can recover money when projects are completed in an effective manner.

Receiver submitted before the Court that there is a lack of clarity concerning dues of local authorities/banks/lenders and that proper relaxations and concessions are required to be given concerning such dues. It was also submitted before the Court that the projects are incomplete, there were various litigations which created a huge financial impact and non-delivery of projects, which reflects the pathetic condition of the real estate sector. The developers and the home buyers both are adversely affected due to non-delivery of booked flats in the regions of Noida and Greater Noida etc.

Considering the current state of real estate, the projects are standstill, and in order to give impetus to such housing projects and mainly considering plight of home buyers and as pointed out by Noida and Greater Noida Authorities that 114 plots were allotted from 2005 onwards, most of projects are incomplete, the Court directed:

On NBCC’s scope of responsibilities and legal immunity

The Court directed that NBCC is immune from any legal actions for any existing disputes involving and in relation to the Amrapali Projects.

“we request the Courts/ Consumer Redressal Commission and other authorities not to permit impleadment of NBCC as respondent and not to issue summons to NBCC as they are doing the work under the supervision of this Court and are not answerable to any other court, tribunal, authorities.”

It further directed that NBCC is granted immunity to be sued in any other court or commission, and they are answerable to Supreme Court only in the pending proceedings. Thus, they cannot be dragged in the litigation filed by existing home buyers, previous contractors, co-developers, landowners, banks, financial institutions, other lenders and creditors, and any Government authorities before any other Court/ Commission or Authority.

It is also made clear that NBCC is not responsible for attending to queries made by the home buyers. They have to report the progress to the Receiver, who then, has to put progress reports of projects on the blog/website.