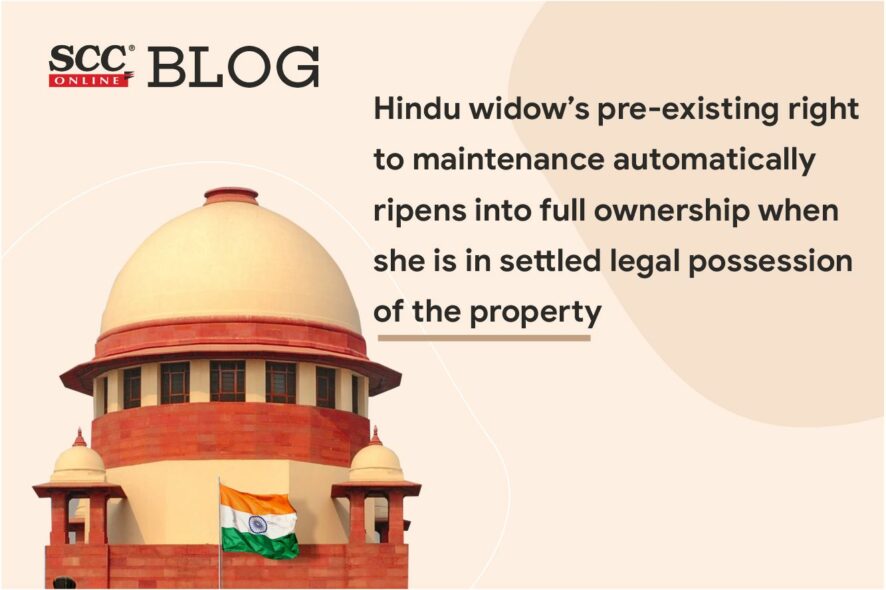 Supreme Court: The bench of Ajay Rastogi and Bela M. Trivedi*, JJ has held that by virtue of Section 14(1) of the Hindu Succession Act, 1956, the Hindu widow’s limited interest gets automatically enlarged into an absolute right, when such property is possessed by her whether acquired before or after the commencement of 1956 Act in lieu of her right to maintenance.

The Court, in the case at hand, was concerned with the claim of one Bhonri Devi of having become the full owner in respect of the suit property on the ground that she was in settled legal possession of the suit property before and after the commencement of the Act, in lieu of her pre-existing right of maintenance, and such limited ownership right had fructified into full ownership by virtue of Section 14(1) of the 1956 Act.

The Rajasthan High Court while discussing about the right of a Hindu widow to the property, observed that the Hindu Women’s Right to Property Act, 1937 was in force in the year 1937 when Ganeshnarayanji, father-in-law of Bhonri Devi expired in 1938, and that even prior to the said Act of 1937, the right of Hindu widow was recognised as per the old shastric customs prevalent in the area.

From the plain reading of Section 14(1) along with the Explanation thereto, the Court explained that in order to become a full owner and not a limited owner, of a property by virtue of Section 14(1), a female Hindu, before or after the commencement of Act of 1956, must be in possession of the property, and it must have been acquired by her by inheritance or devise, or at a partition, or in lieu of maintenance, or arrears of maintenance or by gift from any person, whether a relative or not, before, at or after her marriage or by her own skill or exertion or by purchase or by prescription, or in any other manner whatsoever, or any such property must have been held by her as stridhana immediately before the commencement of the Act.

“There remains no shadow of doubt that a Hindu woman’s right to maintenance was not and is not an empty formality or an illusory claim being conceded as a matter of grace and generosity. It is a tangible right against the property, which flows from the spiritual relationship between the husband and the wife.”

The said right was recognised and enjoined by pure Shastric Hindu Law, which existed even before the passing of the 1937 or the 1946 Acts. Those Acts merely gave statutory backing recognising the position as was existing under the Shastric Hindu Law.

“Where a Hindu widow is in possession of the property of her husband or of the husband’s HUF, she has a right to be maintained out of the said property. She is entitled to retain the possession of that property in lieu of her right to maintenance. Section 14(1) and the Explanation thereto envisages liberal construction in favour of the females, with the object of advancing and promoting the socio-economic ends sought to be achieved by the said legislation.”

It was further explained that the Hindu woman’s right to maintenance is a tangible right against the property which flows from the spiritual relationship between the husband and the wife. Such right was recognized and enjoined under the Shastric Hindu Law, long before the passing of the 1937 and the 1946 Acts. Where a Hindu widow is found to be in exclusive settled legal possession of the HUF property, that itself would create a presumption that such property was earmarked for realization of her pre-existing right of maintenance, more particularly when the surviving co-parcener did not earmark any alternative property for recognizing her pre-existing right of maintenance.

The Court, further, explained that the words “possessed by” used in Section 14(1) are of the widest possible amplitude and include the state of owning a property, even though the Hindu woman is not in actual or physical possession of the same. Of course, it is equally well settled that the possession of the widow, must be under some vestige of a claim, right or title, because the section does not contemplate the possession of any rank trespasser without any right or title.