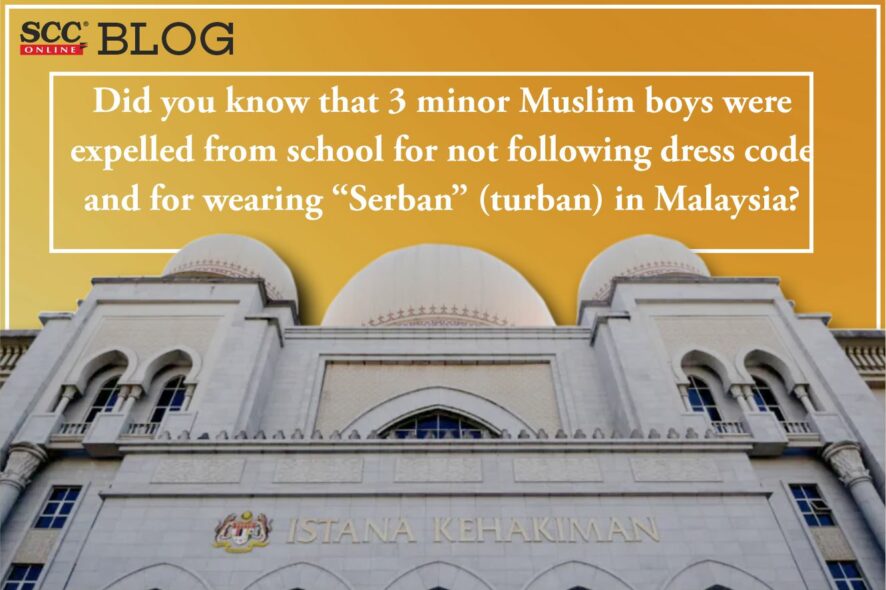 As the proceedings in #hijabrow continue in Karnataka High Court, we bring you another interesting decision from Foreign Court, wherein the Federal Court of Malaysia laid down some very pertinent observations.

In the year 2006, the Federal Court of Putrajaya deciphered whether the wearing of Serban/turban was essential practice for Muslim boys.

The School Regulations 1997 stipulated that the uniform for male pupils comprised of blue-black long pants, a white short sleeved shirt, white rubber shoes and socks. Regulation 3(f)(v) provided that black or blue songkok was allowed to be worn. However, in Regulation 3(i)(i) all pupils were prohibited from wearing “jubah, turban (serban), topi, ketayap dan purdah.’

In this case from Malaysia, the minors were advised not to wear the turban so as to comply with the School Regulations 1997.

Since the minors continued to refuse to comply with the regulations, they were expelled from the school. On Challenging the said decision, the High Court found that the School Regulations 1997 were unconstitutional but the same was reversed by the Court of Appeal.

Federal Court considered the question, whether the School Regulations 1997, in so far as it prohibited the wearing of turban by the students of the school as part of the school uniform during school hours was constitutional or not?

The Court of Appeal decided whether the right to wear a “Serban” was an integral part of the religion of Islam. To answer this Court said that “there was not a shred of evidence before the learned judge confirming that the wearing of a serban is mandatory in Islam and is, therefore, an integral part of Islam.”

Proceeding further, the Court added that, the Court of Appeal was criticised for relying on Indian authorities, especially because of the differences between the provisions of the Indian Constitution and the Federal Constitution, in particular, the preamble to the Indian Constitution declares India to be a secular state and no religion of the state is provided. It is also said, who is to decide whether a particular practice is an integral part of a religion or not?

Federal Court asserted that it was only concerned with the word “practice his religion”.

The approach that the Court adopted to was that:

First, there must be a religion.

Secondly, there must be a practice.

Thirdly, the practice is a practice of that religion.

Once the above-said is proved, the Court should then consider the importance of the practice in relation to religion. To add to this, Court elaborated stating that if the practice is of a compulsory nature or “an integral part” of the religion, the Court should give more weight to it. If it is not, the court, depending on the degree of its importance, may give lesser weight to it.

The Court also stated that “A total prohibition certainly should be viewed more seriously than a partial or temporary prohibition.”

The Court expressed that, according to Shari’ah the obligation to perform even a mandatory practice like the five daily prayers is only mandatory on Muslims who have attained the age of majority, usually taken to be 15 years of age for boys. It could be seen that with regard to practices that are mandatory, the Shari’ah treats adults and children differently, like any law, for that matter.

In this case, the Court noted that the Al-Quran makes no mention about the wearing of turban and also there had been no “fatwa” in Malaysia on the wearing of the turban.

“I accept that the Prophet (P.B.U.H.) wore turban. But he also rode a camel, built his house and mosque with clay walls and roof of leaves of date palms and brushed his teeth with the twig of a plant. Does that make the riding a camel a more pious deed than travelling in an aeroplane? Is it preferable to build houses and mosques using the same materials used by the Prophet (P.B.U.H.) and the same architecture adopted by him during his time? In Malaysia, Muslim houses and mosques would leak when it rains! There would be no Blue Mosque or Taj Mahal, not even the present Masjid Al-Haram and Masjid Al-Nabawi, Alhambra or Putrajaya that the Muslims can be proud of! Again, is it more Islamic to brush one’s teeth with a twig than using a modern tooth brush with tooth paste and water to wash in the privacy of one’s bathroom?”

Talking about prohibition, the Court asserted that the students, primary school students of the school, are not allowed to wear the turban as part of the school uniform, ie, during school hours. They are not prevented from wearing the turban at other times.

Even in school, certainly, they would not be prevented from wearing the turban when they perform, say, their “Zohor” prayer in the school “surau” (prayer room). But, if they join the “Boy Scout”, it is only natural if they are required to wear the Scouts uniform during its activities. Or, when they play football, naturally they would be required to wear shorts and T- shirts. Should they be allowed to wear “jubah” when playing football because it was the practice of the Prophet (P.B.U.H.) to wear jubah?

Court even suggested changing the school in case there was an issue with the dress code, for e.g., to a “pondok” school that would allow them to wear the turban.

Interestingly, moving forward the Court detailed out by stating that the appellants were in their formative years and when they should be attending school, studying and playing, obeying the school discipline, etc. but they were made to spend those years being different from other students, disregard the school regulations, disobey the teachers, rebel against the authorities.

After placing down all the above observations, the Court held that the School Regulations 1997 in so far as it prohibited the students from wearing a turban as part of the school uniform during school hours did not contravene the provision of Article 11(1) of the Federal Constitution and it was not unconstitutional.

Read other decisions that were on similar lines

Supreme Court of the United States: While determining that whether Rule 1 promulgated by the Montana Revenue Department barring the families from using State scholarships, for religious schools is violative of the Federal Constitution; the 9 Judge Bench of the Court, with a ratio of 5:4 held that, the application of the no-aid provision discriminates against religious schools and families; therefore it violates the Free Exercise Clause of the Federal Constitution. The majority comprised of John Roberts, C.J., Clarence Thomas, Samuel Alito, Brett Kavanaugh, and Neil Gorsuch, JJ.

The dispute revolved around a program established by the Montana Legislature which granted tax credits to those who donated to organizations that award scholarships for private school tuition. In order to reconcile the legislative program with, Article X 6(1) of the Montana Constitution, that bars government aid to any school “controlled in whole or in part by any church, sect, or denomination”, the Montana Revenue Department issued the impugned Rule 1. Due to the promulgation of the impugned Rule, several families were blocked from using scholarship funds for their children’s tuition at Stillwater Christian School. Hence they sued the Department, alleging that the Rule discriminated on the basis of their religious views and the religious nature of the school they had chosen. The Department contended that instant issue is similar to Locke v. Davey, 540 U. S. (2004) wherein the plaintiff denied a scholarship because of what he proposed to use the funds to prepare for the ministry, which was essentially a religious endeavour. The Department further contended that the no-aid provision promotes religious freedom.

Rejecting the contentions raised by the Department, the majority referred to the decision rendered in Trinity Lutheran Church of Columbia Inc. v. Comer, 582 U. S. (2017) where it was held that disqualifying otherwise eligible recipients from a public benefit “solely because of their religious character” imposes “a penalty on the free exercise of religion that triggers the most exacting scrutiny”. The majority further observed that the Free Exercise Clause of the Federal Constitution protects religious observers against unequal treatment” and against “laws that impose special disabilities on the basis of religious status. Noting that the application of Montana’s no-aid provision excludes religious schools from public benefits solely because of religious status, therefore a strict scrutiny is necessary. It was also observed that Montana’s no-aid provision did not zero in on any essential religious course of instruction but rather barred aid to a religious school simply because it is a religious school. It was stated that, “The Department’s argument that the no-aid provision promotes religious freedom is unavailing because an infringement of First Amendment rights cannot be justified by a State’s alternative view that the infringement advances religious liberty. The Department’s argument is especially unconvincing because the infringement here broadly burdens not only religious schools but also the families whose children attend them. The Department suggests that the no-aid provision safeguards public education by ensuring that government support is not diverted to private schools, but that interest does not justify a no-aid provision that requires only religious private schools to bear its weight”.

Ruth Bader Ginsburg, Elena Kagan, Stephen Breyer and Sonia Sotomayor, JJ., delivered the dissenting opinion. As per the minority opinion, it was stated that the majority did not recognise the ‘play-in-the-joints’ doctrine which means that the Free Exercise Clause forbids a State to draw any distinction between secular and religious uses of government aid to private schools that is not required by the Establishment Clause; thus the majority’s approach and its conclusion in this case is a risky entanglement and conflict that the Religion Clauses intended to prevent in the first place. [Espinoza v. Montana Department of Revenue, 591 US (2020), decided on 30-06-2020]