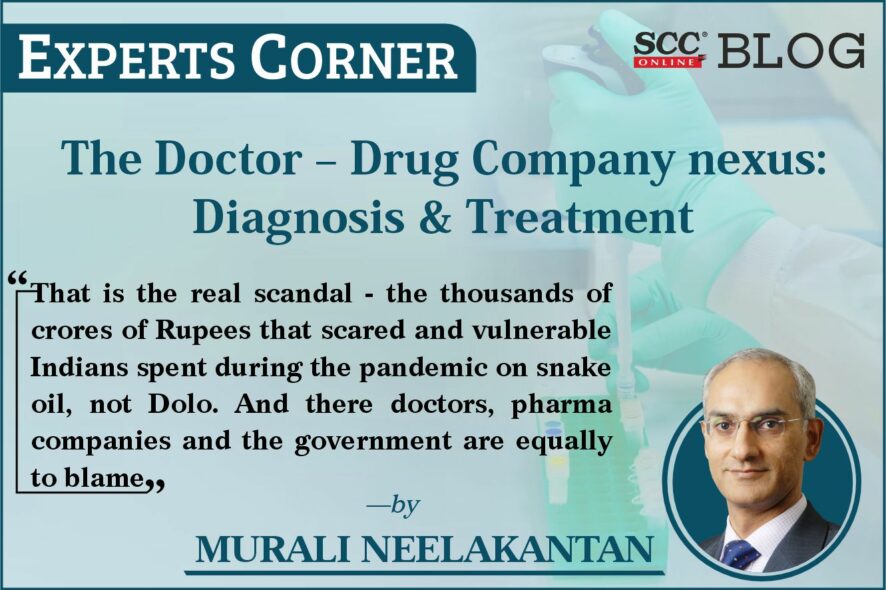 A recent petition in the Supreme Court highlighted the old and unholy nexus between doctors and pharma companies and asked some fundamental questions: What is the real basis for doctors to prescribe certain brands of medicines? How much influence do pharma companies have on doctors? How true are the allegations of fantastic “bribes” like cruises, expensive holidays, and gifts? Do we need legislation to prohibit these unethical practices?

The case was filed by an association of medical representatives, the sales force of pharma companies who visit doctors and persuade them to prescribe their brand of medicines. The specific allegation there is that Micro Labs, the owner of the Dolo brand of Paracetamol spent huge sums of money, alleged to be Rs 1000 crores on marketing the Dolo brand and this was in the form of bribes to doctors. This doesn’t seem to make any sense for a variety of reasons:

(a) Paracetamol is widely used and available over the counter at all pharmacies. There are over 200 brands of Paracetamol — evidence of a thriving market, almost perfect competition in the classical economic sense of the word. The profit margin on Paracetamol is not huge given that the price is fixed under the Drugs (Prices Control) Order, 20131. As a result, it is a cheap drug and to be able to make huge profits that can justify the marketing spend alleged in the petition, it will need exceptionally large quantities to be sold.

(b) The claim that Rs 1000 crores were spent to promote Dolo, which had revenues of about Rs 350 crores last year just doesn’t ring true. Just as a comparison, ITC, which has a huge consumer business with hundreds of products and brands with an annual revenue of almost Rs 60,000 crores2 and profit in excess of Rs 15,000 crores spent about Rs1040 crores on market research, marketing and sales promotion last year3.

(c) It will be almost impossible for a pharma company to get a list of all doctors who prescribe the Dolo brand and work out the appropriate “incentive” based on quantities prescribed by each of them. This would be easy if the product was a chemotherapy drug or implants where the number of doctors and hospitals using these products is small and “bribes” are easy to calculate and pay. It would be easier to pay distributors and incentivise them to push the retailers to sell more of Dolo than the other brands. After all, this is easier to manage than bribing doctors.

(d) There haven’t been cruises and group tours, foreign conferences, etc. during the last two years when the sales of Dolo have grown. These “incentives” were rampant in the pre-Covid era, and it is hard to believe that doctors who enjoyed these “benefits” were not influenced to prescribe the brands of these patrons.4

(e) There are other good reasons for the brand to have done well recently. The most significant being that it is the leading brand in a category (Paracetamol 650 mg) which was in the Covid treatment protocol issued by the Indian Council of Medical Research (ICMR) and Union Government.

(f) The raw materials for Paracetamol are mostly imported. There has been a huge impact on profit margins already due to price rise in excess of 50%5 and disruption of supplies from China during the pandemic. With no ability to increase prices due to price controls and increased input costs, it is hard to imagine any company approving increased marketing costs when profit margins are shrinking.

If the allegations are indeed true and one must address this possibility since there is a sworn affidavit filed in court, here are a few reasons why a pharma company will make huge investments in a brand like Dolo:

(i) More sales with higher costs in the form of trade margins to distributors and pharmacies make little sense in the short term unless there is a “corporate action” like preferential allotment, private equity investment, initial public offering (IPO), etc. where higher sales create a better outlook for the valuation of the company.

(ii) Huge investment in brand building is in anticipation of a change in law that makes it truly “over-the-counter” so that it can be sold like candy, and this will make the brand an attractive acquisition target for fast moving consumer goods (FMCG) companies like Reckitt Benckiser or Hindustan Unilever (HUL).

Notwithstanding all of the above, the issue of pharma companies bribing doctors to prescribe a particular brand is a real issue, but only in some countries like India6. The United States has the Physician Payments Sunshine Act, 2010 which requires full disclosure of payments to doctors, hospitals and other healthcare service providers so that the general public can judge for itself if doctors are being influenced to prescribe particular medicines7.

India has taken a different and perhaps a better approach to deal with this issue.

(a) Uniform Code of Pharmaceuticals Marketing Practices (UCPMP),8 a voluntary code effective from 2015 which requires pharma companies to conform to ethical marketing practices. Despite calls for this to be made into binding regulations, this remains purely voluntary. There is no stringent punishment prescribed and the enforcement mechanism is weak, relying on industry associations to be the regulator. Members of these pharma associations self-declare their compliance annually and it is very unlikely that any of them will confess to violations.

(b) There is also the Indian Medical Council (Professional Conduct, Etiquette and Ethics) Regulations, 20029 which regulate doctors and are enforced by the Medical Councils in every State which licence doctors and is responsible for the enforcement of ethical practice by doctors. Para 1.5 titled “use of generic names of drugs” mandates every physician to prescribe drugs with generic names. As we all know, this is rarely done and sadly, there is no real enforcement mechanism. As a result, most doctors just ignore this by giving excuses like “prescribed branded drugs are more effective than other brands”10 and continue to prescribe brands. This gives rise to the imputation of influence by pharma companies. Mirroring the UCPMP, Para 6.8 prohibits acceptance of gifts, payments, hospitality, etc. by doctors. Unlike the UCPMP there is an enforcement with fines and reprimand, and even cancellation of licence but this is a rare event, a risk that the doctors accepting “incentives” seem to be willing to take.

(c) The above two initiatives don’t seem to be working for different reasons but the common theme there was the Government trusting doctors and pharma companies to act ethically. It is not hard to understand that this was too much to expect in India. In an innovative initiative, S.37(1) of the Income Tax Act, 1961 was amended with the insertion of Explanation 1 to deny deductions for illegal expenses and the Central Board of Direct Taxes (CBDT) in its circular11 clarified that expenses incurred by pharmaceutical and allied health sector industries for distribution of incentives to medical practitioners are not eligible for deduction.This was, as expected, challenged by pharma companies who contended that there was no law that made incentives to doctors illegal. It was contended that neither the UCPMP nor Indian Medical Council (Professional Conduct, Etiquette and Ethics) Regulations, 2002 created an offence. Thankfully, the Supreme Court was not persuaded by this argument and upheld the CBDT circular in Apex Laboratories (P) Ltd. v. CIT12. In addition to this, all payments to doctors and other healthcare professionals by pharma companies were subjected to tax deducted at source so that now the Government had a list of doctors and payments made to them.

This pragmatic measure by the Government makes it a huge financial disincentive for pharma companies to “incentivise” doctors. The incentives would not be deductible as business expenses and tax would have to be paid on that directly, significantly reducing the profit of pharma companies. In addition, the requirement to deduct tax at source would create a paper trail to identify doctors who had received these incentives and had not reported them in their tax returns.

Has this solved the problem? We do not know for sure, but there have been many instances of doctors and medical representatives claiming that incentives continue to be paid and these were often routed through pharmacies and distributors rather than paid directly by the pharma companies. This seems to be true particularly for high value products rather than Paracetamol and the like.

Is there a solution? How have other countries solved this problem?

If there is no prescription by brand name, doctors will have no incentive to promote brands and it will not give pharma companies an incentive to bribe them since doctors have no influence on what the patient will buy from the pharmacist.

But then pharmacists are able to decide the brand to dispense and they are incentivised by their own profit margins to push particular brands. Trade margins are based on Maximum Retail Price (MRP) which means they will push brands which are more expensive where they have higher margins. If they have no incentive, as is the case in most of Europe where they get a fixed dispensing fee irrespective of MRP, agency will be restored to patient who will get to decide which medicine to buy when pharmacists have no incentive to push brands. For this to work effectively, the Government will have to ensure that all medicines are equally effective so that there is no qualitative difference between different manufacturers. This has been a huge challenge for the drug regulator which has failed miserably in this fundamental function for many decades now. If this issue is fixed, then the Jan Aushadi stores can be an excellent alternative for affordable medicines. But that again requires the Government to establish one store in each locality, stock it with all essential drugs and assure doctors and patients that the medicines there are as efficacious as the medicines in the retail stores and also, much cheaper.

So, was there a scandal involving doctors and pharma companies during the pandemic?

What was the incentive for Remdesivir, Itolizumab, HCQS, Zinc, multivitamins, Arsenic Albumin, Coronil and various “immunity boosters” advertised by unscrupulous manufacturers and marketers but also promoted and distributed by politicians and public figures to become blockbusters? That is the real scandal — the thousands of crores of rupees that scared and vulnerable Indians spent during the pandemic on snake oil, not Dolo and there doctors, pharma companies and the Government are equally to blame.

†Murali Neelakantan is currently Principal lawyer at Amicus. He is a dual qualified lawyer (India and UK) and among other positions, he was formerly a partner at an international law firm in London, Cipla’s first global general counsel, and Executive Director and Global General Counsel of Glenmark Pharmaceuticals.

7. Searchable database is at <https://openpaymentsdata.cms.gov/search>.