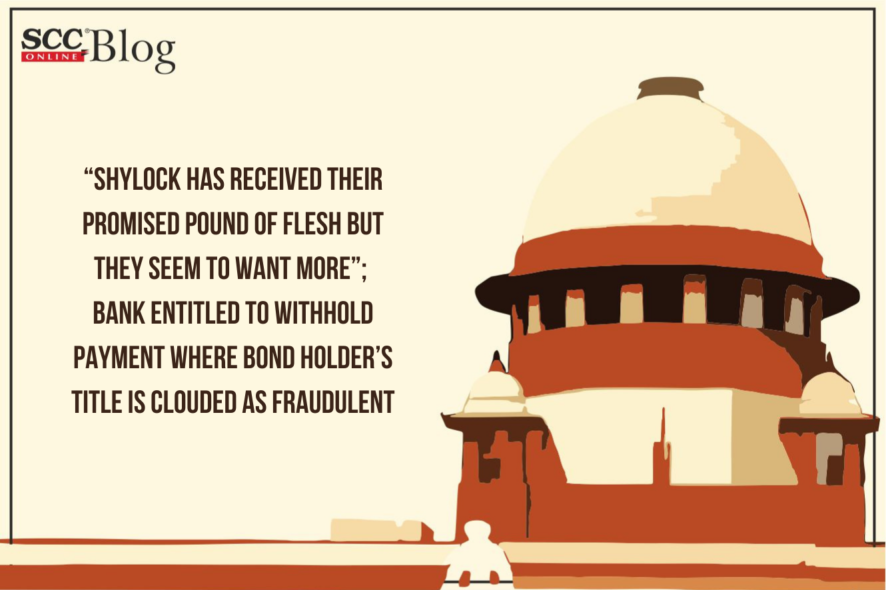 “The company Court while exercising its powers under sections 433 and 434 of the Companies Act would not be in a position to decide, as to who was at fault in not complying with the terms and conditions of the deed of settlement and the compromise deed.”

Findings of the Courts Below

Issues Before the Court

The appellant claimed that his defense was bona-fide as the respondent had supplied defective material. On account of which, the appellant had suffered huge losses and as such, he was  entitled to receive the damages from the respondent.

Observations and Analysis by the Court

The Bench observed that it is well settled that where the debt is undisputed, the court will not act upon a defence that the company has the ability to pay the debt but the company chooses not to pay that particular debt. The principles on which the court acts are firstly, that the defence of the company is in good faith and one of substance, secondly, the defence is likely to succeed in point of law and thirdly the company adduces prima facie proof of the facts on which the defence depends. Relying on the decision in Madhusudan Gordhandas & Co. vs. Madhu Woollen Industries Pvt. Ltd., (1971) 3 SCC 632, the Bench stated that, If the debt is bona fide disputed and the defense is a substantial one, the court cannot wind up the company.

Regarding the claim of the appellant that defective material was supplied by the respondent; the Court concurred with the findings of the Company Judge and the High Court that the defence sought by the appellant was an after­thought, as no document was placed on record in support of such contention.

The Bench stated that the defence of the appellant was neither bona-fide nor substantial as no prima facie evidence was produced by the appellant to buttress his claim. Lastly, the Court held that, “The company Court while exercising its powers under sections 433 and 434 of the Companies Act would not be in a position to decide, as to who was at fault in not complying with the terms and conditions of the deed of settlement and the compromise deed.”

Hence, holding the defence of the appellant not to be bona fide, in good faith and of substance, the Bench dismissed the appeal for being devoid of merit.

For the Appellant: Adv. Karan Nehra

For the Respondent: Adv. Tarun Gupta

In the present case, the appellants Madura Coats had filed a petition in the Company Court for winding up of Modi Rubbers on the allegation that Modi Rubbers was unable to pay its huge undisputed debts. The Company Court passed an order for winding up of the Company. Modi Rubbers appealed before the Divisional bench of the High Court which had set-aside the order of the Company Court on the pretext that Modi Rubbers had made an application to BIFR- Board of Industrial & Financial Reconstruction under the provisions of Sick Industrial Companies (Special Provisions) Act, 1985 (SICA) and hence should be entitled to the benefits of the provisions of Section 22 of the SICA. The  Court discovered that Modi Rubbers was willing to pay the dues to Madhura Coats in terms of the rehabilitation scheme passed by BIFR. The Court also based it’s reliance on Real Value Appliances Ltd. v. Canara Bank, (1998) 5 SCC 554, where the question was raised that whether on the registration of a reference, the Division Bench of the High Court could pass orders in an appeal against an interim order passed by the Company Court , to which the Court had replied that the SICA is intended to revive and rehabilitate a sick industry before it can be wound up under the Companies Act. The legislative intention is to ensure that no proceedings against the assets of the company are taken before any decision is taken by the BIFR because if the assets are sold or the company is wound up, it may become difficult to later restore the status quo ante.

The bench comprising of Madan B. Lokur J., finally concluded that the Company Court and the BIFR do not exercise concurrent jurisdiction. Till the company remains a sick company having regard to the provisions of sub-section (4) of Section 20 [of the SICA], BIFR alone shall have jurisdiction as regards sale of its assets till an order of winding up is passed by a Company Court and hence set aside the order passed by the Company Court and upheld the order passed by the Divisional bench of High Court. [Madura Coats Limited v. Modi Rubber Ltd., 2016 SCC OnLine SC 626, decided on 29.06.2016]