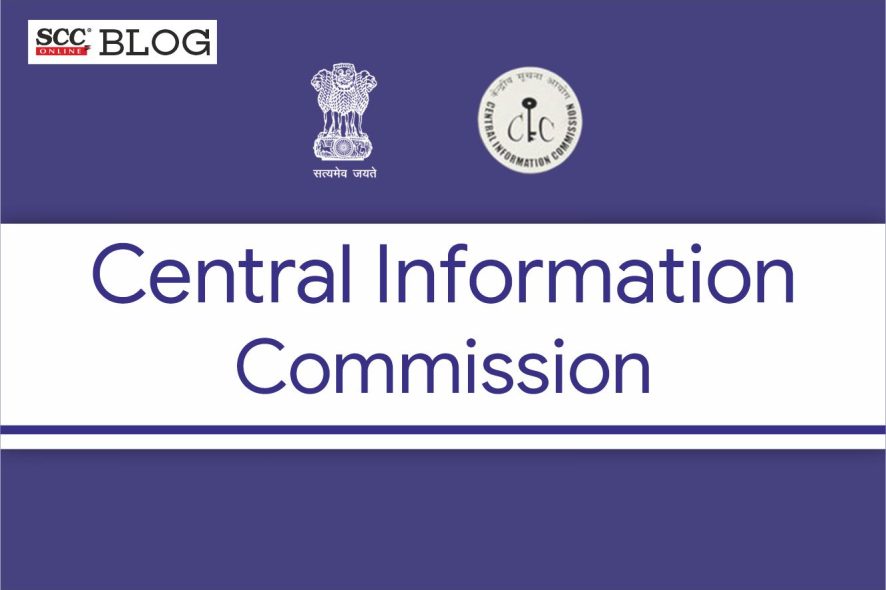 Central Information Commission: In a second appeal filed under Section 19 of the Right to Information Act, 2005 on the ground of unsatisfactory reply furnished by the Central Public Information Officer (CPIO), the Information Commissioner Amita Pandove, has directed the CPIO and Assistant Director (E-Governance cell), to provide an opportunity to the appellant to inspect the relevant records as the information provided to the appellant was erroneous, and also, reprimanded the public authority for providing such mindless and incongruous replies.

In this case, the Appellant filed an online RTI application on 02.05.2021 seeking information on the following:

The CPIO provided the appellant salary sheet for the academic year 2017-18 and mentioned that no more data is available with them.

The Commission noted that on being dissatisfied by the unsatisfactory reply furnished by the Respondent, the appellant filed a second appeal requesting the Commission to direct the CPIO to provide complete information sought for. Further, the appellant stated that the respondent has provided wrong and misleading information and the respondent submitted that the averred institute does not submit their salary sheet to them every year and whatever record was available in their office pertaining to the assessment year 2017-18 has been given to the appellant

Moreover, the Commission directed the CPIO and Assistant Director (E-Governance cell), to provide an opportunity to the appellant to inspect the relevant records as sought in the present RTI application on a mutually decided date and time duly intimated to the appellant telephonically and in writing. Further, the said direction should be complied with within 60 days from the date of receipt of this order and a compliance report of the same be duly sent to the Commission, enumerating the details of documents inspected and copy of documents provided.

The Commission further directed that all the personal information/identifying particulars of any third parties should be adequately redacted/blackened out and that no information shall be disclosed to the appellant which is exempted from disclosure under the provisions of Section 8 and 9 of the RTI Act.

Central Information Commission: In a complaint for an action against the Central Public Information Officer (CPIO) for willfully misleading and furnishing false information to the appellant, the Information Commissioner Heeralal Samariya, observed that the initial reply provided by the CPIO was incorrect, vague and mindlessly prepared and directed him to send his written submissions to justify as to why action should not be initiated against him under Section 20 of the Right to Information Act, 2005 (RTI) for the gross violation of its provisions.

In this case the Complainant filed RTI application on 27.04.2022 seeking information that, whereas the World Health Organisation (WHO) suspended ‘Covaxin’ through United Nations procurement agencies, and recommended countries using the vaccine to take appropriate action, in response to the outcome of a WHO inspection in March 2022 and to conduct an upgrade to address the identified deficiencies in manufacturing practices; thus, the complainant furnished the following questions:

The Complainant stated that he was not satisfied with the reply of the CPIO, thus moved a complaint proceeding under Section 18 of the Right to Information Act, to seek action against the CPIO and the CPIO’s of CDSCO under Section 20 of the RTI Act, and has not moved the second appeal as his main motive was not to obtain answers to the RTI but to fix accountability on the CPIOs. Further, it was submitted that it can be inferred from the CPIO’s submission that now provides answers to RTI queries, that the information was well in possession of the CDSCO and the CPIO and thus, he lied initially.

The Commission observed that the initial reply provided by the CPIO was incorrect, vague and mindlessly prepared. Further, the CPIO has not even justified his averred conduct in his written submission. It further expressed displeasure over such careless conduct of the CPIO and directed him to send his written submissions to justify as to why action should not be initiated against him under Section 20 of the RTI Act for the gross violation of its provisions.

Moreover, it directed the CPIO that if any other persons are also responsible for the omission, then he shall serve a copy of this order on such other persons under intimation to the Commission and ensure that written submissions of all such concerned persons are sent to the Commission. Further, directed that the said written submissions of CPIO must reach the Commission within 30 days from the date of receipt of the order, failing to which appropriate penal action will be taken against the erring official.