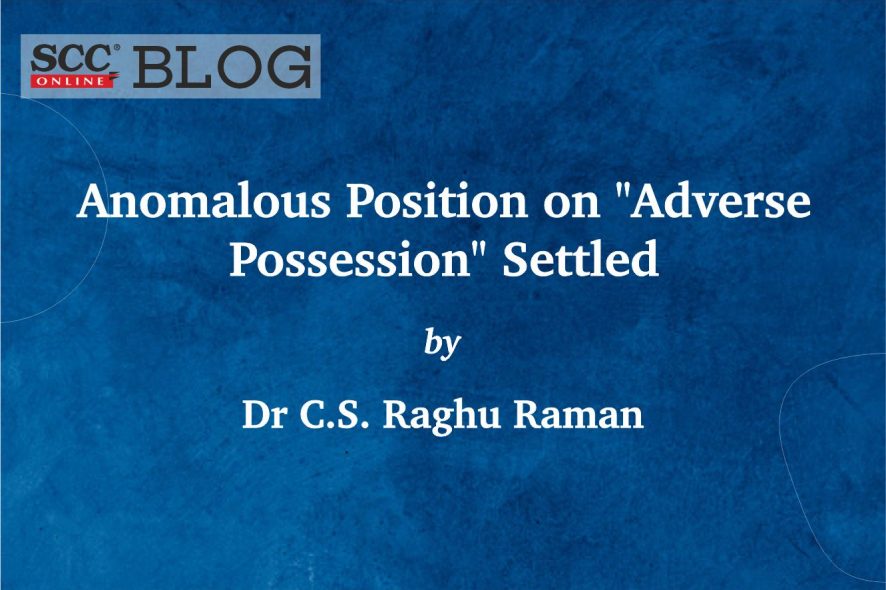 On intention to claim adverse possession, Powell v. Macfarlane1 is quite illustrative and categorical, holding in the following terms: If the law is to attribute possession of land to a person, who can establish no paper title to possession, he must be shown to have both factual possession and the requisite intention to possess (“animus possidendi”).

The Bench of Arun Mishra, S. Abdul Nazeer and M.R. Shah, JJ. pointed out that historical development of adverse possession requires that adverse possessor had to establish “the essential requirements of adverse possession, namely, nec vi i.e. adequate in continuity, nec clam i.e. adequate in publicity and nec precario i.e. adverse to a competitor, in denial of title and his knowledge shall co-exist at the same time.3 Visible, notorious and peaceful so that if the owner does not take care to know notorious facts, knowledge is attributed to him on the basis that but for due diligence he would have known it”.4

Another principle was that “Adverse possession cannot be decreed on a title which is not pleaded. Animus possidendi under hostile colour of title is required.”

The author wishes to begin this essay with the three-Judge Bench decision in Sarangadevar Periya Matam v. Ramaswami Gounder.5

In Sarangadeva Periya Matam6 on death of the plaintiff-respondent, his legal representative pursued the appeal “claiming title to the lands by prescriptive right on adverse possession on reason that the plaintiff, since 1915, and his predecessors-in-interest were in adverse possession of the lands”, and “on the expiry of 12 years in 1927 he acquired prescriptive title to the lands under Section 28 7 read with Article 1448 of the Limitation Act, 1908”.

Accepting his arguments on the above first contention,9 the Bench of Bachawat, R.S. Subba Rao, K. and Mudholkar, J.R., JJ. after an exhaustive review of earlier decisions, held that:

10. … by the operation of Article 144 read with Section 28 of the Limitation Act, 1908 the title of the math to the suit lands became extinguished in 1927, and the plaintiff acquired title to the lands by prescription. He continued in possession of the land until January 1950. It has been found that in January 1950 he voluntarily delivered possession of the lands to the math, but such delivery of possession did not transfer any title to the math.10

On the next issue, the Supreme Court held that “the suit was instituted in 1954 and is well within time”11 when it was found by Their Lordships that:

The appeal was dismissed.

In Des Raj v. Bhagat Ram13, the plaintiff-respondents filed the suit “for declaration of title and for a permanent injunction based on adverse possession against defendants-appellants”. After observing that “the factual aspects of the matter which are neither denied nor disputed,” the Bench of S.B. Sinha and Markandey Katju. JJ. declared that ”the plaintiff-respondent had remained in possession for a long time i.e. since 1953 and that in his plaint, the plaintiff did not specifically plead ouster but mofussil pleadings, as is well known, must be construed liberally, and be construed as a whole”14 on quoting Devasahayam v. P. Savithramma,15 declared that:

19. Only because the parties did not use the terminology which they should have, ipso facto, would not mean that the ingredients for satisfying the requirements of statute are absent. There cannot be any doubt whatsoever that having regard to the changes brought about by Articles 64 and 65 of the Limitation Act, 196316 vis-à-vis Articles 14217 and 144 of the Limitation Act, 1908, the onus to prove adverse possession would be on the person who raises such a plea. It is also furthermore not in dispute that the possession of a co-sharer is presumed to be possession of the other co-sharers unless the contrary is proved.

20. A plea of adverse possession or a plea of ouster would indisputably be governed by Articles 64 and 65 of the Limitation Act, 1963.

The Bench of S.B. Sinha and Markandey Katju, JJ. also declared that:

22. The mere assertion of title by itself may not be sufficient unless the plaintiff proves animus possidendi. But the intention on the part of the plaintiff to possess the properties in the suit exclusively and not for and on behalf of other co-owners also is evident from the fact that the defendant-appellants themselves had earlier filed two suits. Such suits were filed for partition. In those suits the defendant-appellants claimed themselves to be co-owners of the plaintiff. The claim of hostile title by the plaintiff over the suit land, therefore, was, thus, known to the appellants since both suits were dismissed in the year 1977…. It may be true, as has been contended on behalf of the appellants before the courts below, that a co-owner can bring about successive suits for partition as the cause of action, therefore, would be a continuous one. But it is equally well settled that the pendency of a suit does not stop the running of “limitation”. The very fact that the defendants despite the purported entry made in the revenue settlement record-of-rights in the year 1953 allowed the plaintiff to possess the same exclusively and had not succeeded in their attempt to possess the properties in Village Samleu and/or otherwise enjoy the usufruct thereof, clearly goes to show that even prior to institution of the said suit the plaintiff-respondent had been in hostile possession thereof.18

“Article 65 of the Limitation Act, 1963, therefore, would in a case of this nature have its role to play, if not from 1953, but at least from 1968 when the plaintiff made his hostile declaration claiming title for the property at least in his written statement in the suit filed in the year 1968. Thus, at least from 1968 onwards, the plaintiff continued to exclusively possess the suit land with the knowledge of the defendants- appellants.”19

Dismissing the appeal, the Bench of S.B. Sinha and Markandey Katju, JJ. held that:

“…having regard to the peculiar facts obtaining in the case, we are of the opinion that the plaintiff-respondent had established that he acquired title by ousting the defendant-appellants by declaring hostile title in himself which was to the knowledge of his co-sharers.”20

Then coming to another dimension on “claim of adverse possession over public lands”, the Court declared that:

The “concomitant effect of adverse possession” was also explained when the Court observed:

“Adverse possession is heritable and there can be tacking of adverse possession by two or more persons as the right is transmissible one. In our opinion, it confers a perfected right which cannot be defeated on reentry except as provided in Article 65 itself.”23

The Bench of Arun Mishra, S. Abdul Nazeer and M.R. Shah, JJ. declared that “plea of acquisition of title by adverse possession can be taken by plaintiff under Article 65 of the Limitation Act and there is no bar under the Limitation Act, 1963 to sue on aforesaid basis in case of infringement of any rights of a plaintiff” overruling Gurdwara Sahib v. Gram Panchayat Village Sirthala,24 State of Uttarakhand v. Mandir Sri Laxman Sidh Maharaj25 and Dharampal v. Punjab Wakf Board26 as not correct.

Comments of the author

On careful reading of Ravindra Kaur Grewal27, the following principles can be noted:

For instance, an adverse possessor claiming through his immediate predecessor, say one of the parents, can tack the earlier possession advantageously to claim the benefit of the Full Bench decision.

On strength of the observations in State of Haryana v. Mukesh Kumar35 and Hemaji Waghaji Jat v. Bhikhabhai Khengarbhai Harijan,36 the author firmly believes that “when adverse possession itself is simply trespassing into property of others, it is not justifiable to allow tacking in above circumstances thereby aggravating the difficulties of true owner”.

The Bench of Dalveer Bhandari and Deepak Verma, JJ. in Mukesh Kumar37 observed that “Adverse possession allows a trespasser — a person guilty of a tort, or even a crime, in the eye of the law — to gain legal title to land which he has illegally possessed for 12 years. How 12 years of illegality can suddenly be converted to legal title is, logically and morally speaking, baffling” asking the Government of India to either abolish or bring suitable amendments to law of adverse possession.

Identical observations can be found in another Bench of Dalveer Bhandari and Harjit Singh Bedi, JJ. who also wrote to the Government of India to introduce suitable changes.38

Despite the above observations on principle of adverse possession, Ravinder Kaur39 found it as a necessary, inevitable principle when the owner did not care to protect his property.

* Professor of Law, Hyderabad. Author can be reached at <csraghuraman1954@gmail.com>.

3. In S.M. Karim v. Bibi Sakina, AIR 1964 SC 1254, para 5, Hidayatullah, J. observed thus: “Adverse possession must be adequate in continuity, in publicity and extent and a plea is required at the least to show when possession becomes adverse so that the starting point of limitation against the party affected can be found.”

9. Sarangadevar Periya Matam v. Ramaswami Gounder, AIR 1966 SC 1603, para 2. Their Lordships did not think it necessary to decide the next submissions viz. (2) by the resumption proceedings and the grant of the ryotwari patta a new tenure was created in his favour and he acquired full ownership in the lands; and (3) in any event, he was in adverse possession of the lands since 1928, and on the expiry of 12 years in 1940 he acquired prescriptive title to the lands under S. 28 read with Art. 134-B of the Limitation Act, 1908.

15. (2005) 7 SCC 653, 661, para 20 held: “The pleadings as are well known must be construed reasonably. The contention of the parties in their pleadings must be culled out from reading the same as a whole. Different considerations on construction of pleadings may arise between pleadings in the mofussil court and pleadings in the Original Side of the High Court.”

29. The suit can be brought within 6 months of dispossession, need not be on title.

31. Limitation Act, 1963, Art. 65 — “For possession of any immovable property or an interest thereon based on title.”

32. Interestingly Art. 65 gives 12 years to retrieve his possession while adverse possessor shall wait for 12 years to assert his “possession as well title” to the property.

35. (2011) 10 SCC 404, the attempts of State, through Police Department, to claim declaration of title to the respondents-defendant's land through adverse possession was not allowed. Mukesh Kumar to be taken as impliedly overruled by the Full Bench.

36. (2009) 16 SCC 517. There seems to be no necessity to think of overruling of this ruling, since the Supreme Court rejected the claim of adverse possession on reasons that “when pleading, issues framed in trial court were silent on adverse possession, both appellate courts also observed failure to prove and establish adverse possession”.

38. Of course, both were decisions of Division Benches.