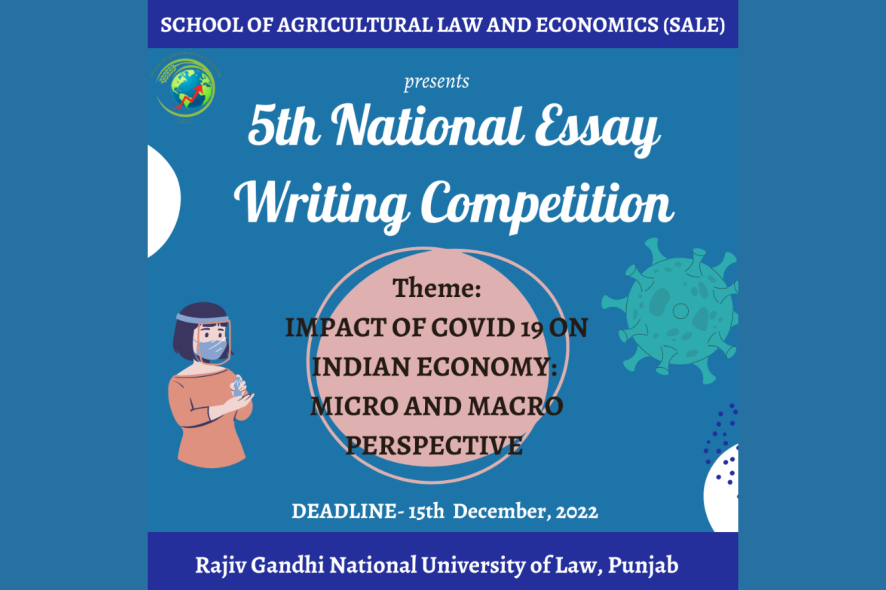 The School of Agricultural Law and Economics (SALE), RGNUL is inviting essays for the Fifth edition of its National Essay Writing Competition. The last date to submit the contributions is 15th December 2022.

School of Agricultural Law and Economics (SALE), a centre of excellence at the Rajiv Gandhi National University of Law, Punjab (RGNUL), was established with the objective of providing a platform for multidimensional analysis pertaining to research in economics and law, with special emphasis on legal, social, political and cultural paradigms encompassing the study of law.

Students, scholars, or academicians pursuing any degree or course, from any recognized university can participate in the competition.

Impact of COVID-19 on Indian Economy: A Micro and Macro Perspective

Please Note: The above-mentioned list of sub-themes is merely illustrative and not exhaustive and hence any other submission pertinent to the broader theme shall be accorded consideration.

There is no registration fee.

E- certificate of appreciation shall be awarded to the top entries of the competition.

E- certificate for participation shall be provided to all participants. 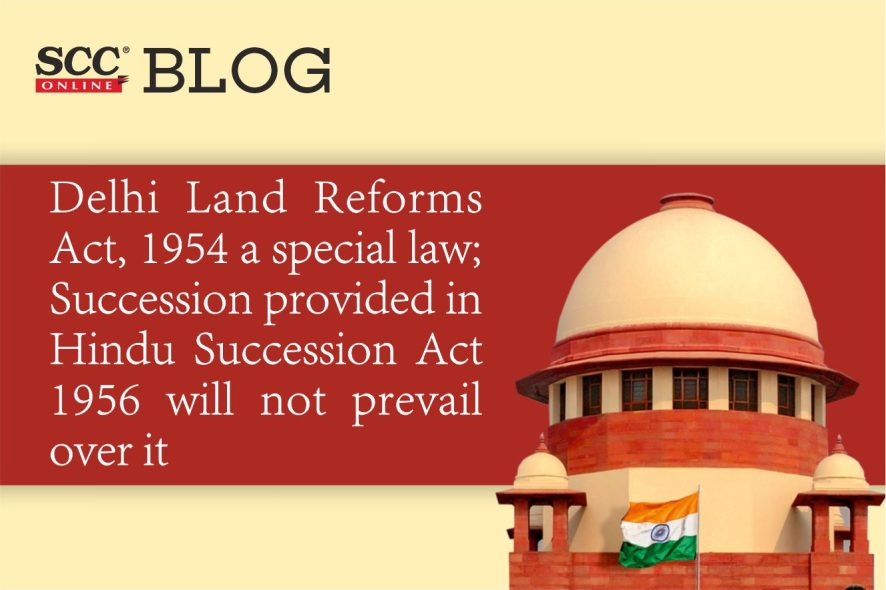 Supreme Court: In a case where challenge was made to declare Section 50(a) of the Delhi Land Reforms Act, 1954 unconstitutional being ultra vires Articles 14, 15, 254 and 21 of the Constitution of India, the bench of Hemant Gupta and Vikram Nath*, JJ has held that all the legislations included in the Ninth Schedule to the Constitution before the Judgment in the case of Kesavananda Bharati vs. State of Kerala, 1973 (4) SCC 225 that is 24.04.1973, would stand protected under Article 31B of the Constitution and, therefore, the challenge to the validity of provisions of the 1954 Act must fail.

The Provision in question

Section 50. General order of succession from males: – Subject to the provisions of Section 48 and 52, when a Bhumidhar or Asami being a male dies, his interest in his holding shall devolve in accordance with the order of the succession given below:

a) Male lineal descendants in the male line of the descent:

Provided that no member of this class shall inherit if any male descendant between him and the deceased is alive:

Provided further that the son or sons of a predeceased on how low so ever shall inherit the share which would have devolved upon the deceased if he had been then alive:

(i) violation of Article 14 of the Constitution;

(ii) women being discriminated despite world over the rights of women were being empowered;

Repugnancy – Article 254 of the Constitution

It was argued before the Court that Succession provided in 1956 Act will prevail over the succession provided in 1954 Act in view of Article 254 of the Constitution, as there is clear repugnancy. The Court rejected this submission and held that the question of repugnancy arises only if both the Parliament and the State legislature have made law with respect to any one of the matters enumerated in the Concurrent list (List III). However, in the present case two enactments of 1956 and 1954 are relatable to Entries in List III and List II respectively. Thus, no question of repugnancy would arise in view of Article 254 of the Constitution.

The argument relating to 1956 Act being a special law and 1954 being a general law is completely misconceived as, it has been expressed by the Supreme Court as well as High Courts, on several occasions, that any State enactment relating to Agricultural land tenures is a special law.

Repeal of an enactment – Effect

The Court also rejected the contention that Section 4(2) of the 1956 Act having been deleted by an amendment in 2005, there would be no justification to apply the provisions of succession given in the 1954 Act as the same would now be governed by the 1956 Act as by virtue of Section 6 of the General Clauses Act, the repeal of an enactment would not affect the previous operation of such an enactment.

In the present case, as the succession has opened prior to 09.09.2005, the rights of the descendants in terms of Section 50 became crystallized on account of the said Section read with Section 4(2) of the 1956 Act, therefore, the deletion of Section 4(2) cannot have retrospective effect.

Also, the 1954 Act is a special law, dealing with fragmentation, ceiling, and devolution of tenancy rights over agricultural holdings only, whereas the 1956 Act is a general law, providing for succession to a Hindu by religion as stated in Section 2 thereof. The existence or absence of Section 4(2) in the 1956 Act would be immaterial.

While it was argued before the Court that the provisions of Section 50(a) of the 1954 Act are violative of Articles 14 and 15 of the Constitution of India as there is clear discrimination on the ground of sex, the Court held that the argument was invalidated once it was held that there can be no challenge to the 1954 Act as the said legislation is included in the Ninth Schedule of the Constitution of India.