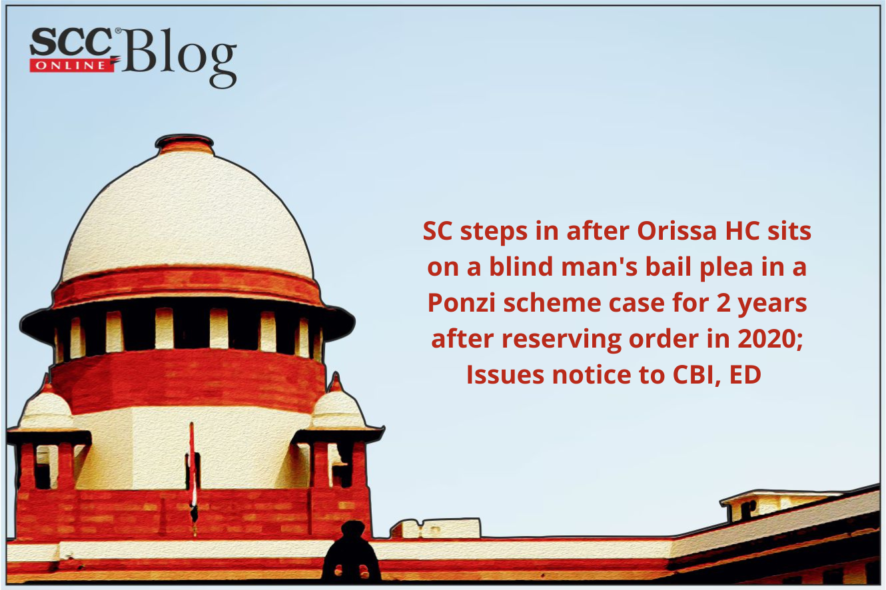 Supreme Court: The vacation bench of AS Bopanna and Vikram Nath, JJ has issued notice returnable in 3 weeks in the matter where one Mohd. Naseer, who has been in custody since 14.02.2019 for being charged under the Prize, Chits & Money Circulation Schemes (Banning) Act, 1978.

Prior to this, the Petitioner had been arrested on 20.07.2009 and was granted bail on the same date. He was then not arrested till 14.02.2019 even though the charge-sheet was filed on 09.12.2016. It has hence been argued before the Court that the same is against the law laid down by the Supreme Court in Siddharth v. State of UP, (2022) 1 SCC 676 and Aman Preet Singh v. CBI, 2021 SCC OnLine SC 941, wherein it was held that if the accused has not been arrested during the course of the investigation and has cooperated with the investigation then there is not requirement of arrest post filing of charge-sheet.

Further, the petitioner had applied for bail before the Orissa High Court and the order was reserved on 12.06.2020. It has been argued that he is confined in jail awaiting adjudication of the case since then. Notably, the Petitioner has already been detained for more than 3 years where the total period of incarceration in case of conviction is maximum 7 years.

The petitioner, who suffers from a permanent disability of blindness by birth, has submitted before the Court that the prolonged detention is against the fundamental rights of the Petitioner under Article 21 of the Constitution of India.

The Bill when passed is to be called as the ‘Chit Funds (Amendment) Act, 2018’, to further amend the Chit Funds Act, 1982, w.e.f. the date of its publication/notification in the Official Gazette, with the following amendments —

1. In the Chit Funds Act, 1982 (hereinafter referred to as the “principal Act”), in Section 2, in clause (b), after the word “kuri“, the words, “fraternity fund” shall be inserted.

2. For Section 11 of the principal Act, the following section shall be substituted, namely —

(2) Where at the commencement of this Act, —

(a) any person is carrying on chit business without using as part of his name any of the words specified in sub-section (1); or

Provided that the State Government may, if it considers it necessary in the public interest or for avoiding any hardship, extend the said period of one year by such further period or periods not exceeding one year in the aggregate.’.

3. In Section 16 of the principal Act, in sub-section (2), after the words “two subscribers”, the words “present in person or through video conferencing duly recorded by the foreman” shall be inserted.

4. In Section 17 of the principal Act, in sub-section (1), after the words “at least two other subscribers who are present”, the words “in person or through video conferencing” shall be inserted; and the following proviso shall be inserted, namely:—

“Provided that where two subscribers required to be present under sub-section (2) of section 16 are present through video conferencing, the foreman shall have the minutes of the proceedings signed by such subscribers within a period of two days of the date of the draw.”.

6. In Section 21 of the principal Act, in sub-section (1), for clause (f), the following clauses shall be substituted, namely:—

“(f) to substitute subscribers in place of defaulting subscribers; (fa) to exercise his right to lien against the credit balance in other non-prized chits; and “.

7. In Section 85 of the principal Act, in clause (b), for the words “one hundred rupees”, the words “such amount as may be specified, by notification in the Official Gazette, by the State Government” shall be substituted.

STATEMENT OF OBJECTS AND REASONS

1. The Chit Funds Act, 1982 was enacted to provide for the regulation of chit funds which are indigenous business in India and have conventionally satisfied the financial needs of the low-income households. The chit is a mechanism which combines credit and savings in a scheme, in which a group of individuals come together for a pre-determined duration and subscribe a certain sum of money by way of periodical instalments and each such subscriber, in his turn as determined by lot or by auction or by tender or any other specified manner, gets the collected sum. In this way, people who are in need of funds and those who want to save are able to meet their requirements simultaneously.

2. In past, concerns had been expressed by various stakeholders regarding challenges being faced by the chit business. Therefore, the Central Government constituted a Key Advisory Group on Chit Funds to review the existing legal, regulatory and institutional framework for Chit Funds and its efficacy and to suggest legal and regulatory initiatives required for orderly growth of the said sector. The Key Advisory Group submitted its recommendations relating to improvements in the institutional and legal structure to further develop the chit business in order to reduce the regulatory burden of the chit business and to protect the interest of the subscribers of the chits.

3. The Parliamentary Standing Committee on Finance (16th Lok Sabha), in its 21st Report on Efficacy of Regulation of Collective Investment Schemes (CIS), Chit Funds, etc., had also recommended to finalise the legislative and administrative proposals for strengthening and streamlining of the registered Chit Fund sector. Further, the said Committee, in its 35th Report on the Action Taken by the Government on the Recommendations contained in the 21st Report, had recommended the need to quickly firm up the legislative and administrative proposals for the Chit Funds sector.

(ii)  to allow the mandatory presence of 2 subscribers, as required under Section 16(2), either in person or through video conferencing duly recorded by the foreman;

(iii)  that where the presence of the mandatory 2 subscribers was through video conferencing, the minutes of proceedings should be signed by them within 2 days;

(v)  to enable the foreman to have a right to lien for the dues from subscribers, so that set-off is allowed by the chit fund for subscribers who have already drawn funds, so as to discourage default by them;

(vi)  to amend Section 85(b), so as to confer power upon the State Government to specify the amount, by notification, up to which any chit fund shall be exempted under the said section.

5. The Bill seeks to achieve the above objects.