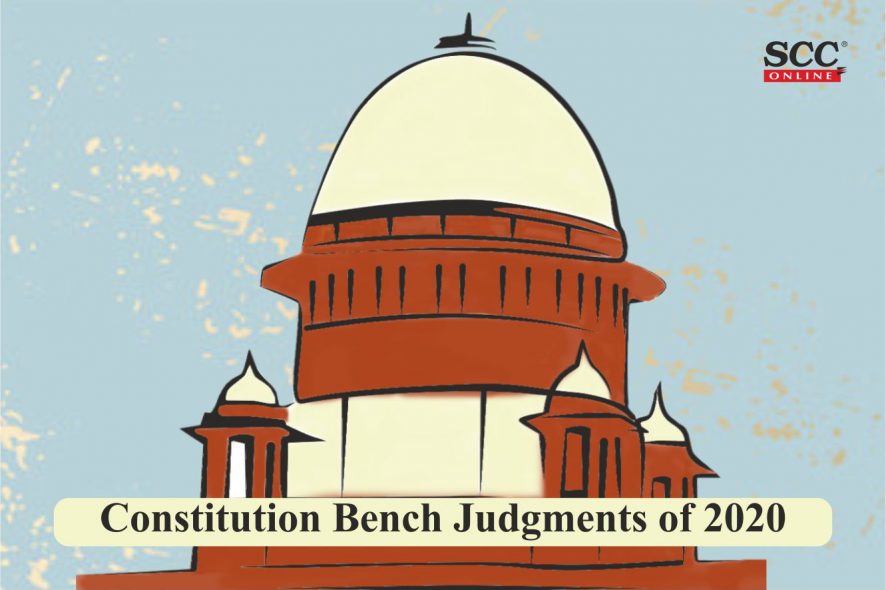 As we look forward to the new year of 2021, here is a quick recap of the Constitution bench verdicts delivered by the Supreme Court of India in 2020.

1. Questions of law can be referred to larger bench while hearing a review petition

After renowned jurist and senior advocate Fali Nariman objected to the manner in which the Supreme Court turned a review of the Sabarimala case into an opportunity to set up a nine-judge Bench and examine whether certain essential religious practices of various faiths, including Islam and Zoroastrianism, should be constitutionally protected, the 9-judge bench held that the Supreme Court can refer questions of law to a larger bench while exercising its review jurisdiction.

The Court had in November last year, suggested that the Sabarimala issue along with other related issues, be heard by a larger bench of at least 7-judges. [Read: Sabarimala Review Petitions Not Referred To A Larger Bench, But Kept Pending. Here’s What Supreme Court Has Actually Held]

2. Pleas challenging the abrogation of Article 370 not referred to a larger bench

The bench refused to refer the petitions challenging the constitutional validity of the Centre’s move to abrogate Article 370 to a larger bench. Holding that there is no conflict between the judgments in the Prem Nath Kaul case and the Sampat Prakash case, the bench said that judgments cannot be interpreted in a vacuum, separate from their facts and context. Observations made in a judgment cannot be selectively picked in order to give them a particular meaning. It noted,

“the Constitution Bench in the Prem Nath Kaul case did not discuss the continuation or cessation of the operation of Article 370 of the Constitution after the dissolution of the Constituent Assembly of the State. This was not an issue in question before the Court, unlike in the Sampat Prakash case where the contention was specifically made before, and refuted by, the Court. This Court sees no reason to read into the Prem Nath Kaul case an interpretation which results in it being in conflict with the subsequent judgments of this Court, particularly when an ordinary reading of the judgment does not result in such an interpretation.”

3. No time limit could be fixed while granting anticipatory bail

The bench unanimously ruled that the protection granted to a person under Section 438 Cr.PC should not invariably be limited to a fixed period; it should inure in favour of the accused without any restriction on time.

4. No lapse of acquisition proceedings if government has ‘paid’ compensation

The bench unanimously held that the land owners who had refused to accept compensation or who sought reference for higher compensation, cannot claim that the acquisition proceedings had lapsed under Section 24(2) of the Right to Fair Compensation and Transparency in Land Acquisition, Rehabilitation and Resettlement Act, 2013

Last year, Justice Arun Mishra, heading the Bench, had refused to recuse himself from hearing the case and had said,

“I would be committing a grave blunder by recusal in the circumstances, on the grounds prayed for, and posterity will not forgive me down the line for setting a bad precedent. It is only for the interest of the judiciary (which is supreme) and the system (which is nulli secundus) that has compelled me not to recuse.”

Justice Mishra’s recusal was sought on the ground that he was heading a Bench meant to re-examine a judgment that he had himself given in 2018 in in Indore Development Authority v. Shailendra, (2018) 3 SCC 412.

5. States, and not MCI, have power to make reservation for in-service candidates in Post Graduate Medical Course

The bench unanimously held that States have the legislative competence and/or authority to provide for a separate source of entry for in-service candidates seeking admission to postgraduate degree/diploma courses, in exercise of powers under Entry 25, List III.

“…policy must provide that subsequent to obtaining the postgraduate degree by the concerned in-service doctors obtaining entry  in degree courses through such separate channel serve the State in the rural, tribal and hilly areas at least for five years after obtaining the degree/diploma and for that they will execute bonds for  such  sum the   respective  States  may   consider   fit  and  proper”

The Court, however, specifically observed and clarified that the present decision shall operate prospectively, and any admissions given earlier taking a contrary view shall not be affected by this judgment.

“Reservation was not contemplated for all the time by the framers of the Constitution.  On the one hand, there is no exclusion of those who have come up, on the other hand, if sub¬classification is denied, it would defeat right to equality by treating unequal as equal.”

The bench unanimously held that ’banking’ relating to co­operatives can be included within the purview of Entry 45 of List I, and it cannot be said to be over inclusion to cover provisions of recovery by co­operative banks in the SARFAESI Act.

Holding that Co­operative bank’s entire operation and activity of banking are governed by a law enacted under Entry 45 of List I, i.e., the BR Act, 1949, and the RBI Act under Entry 38 of List I, the bench said,

8. Andhra Pradesh’s 100% reservation for Scheduled Tribe candidates for the post of teachers without rhyme or reason

Holding the Government Office Ms. No.3 dated 10.1.2000 issued by the erstwhile State of Andhra Pradesh providing 100% reservation to the Scheduled Tribe candidates out of whom 33.1/3% shall be women for the post of teachers in the schools in the scheduled areas in the State of Andhra Pradesh, unconstitutional, the bench said that there was no rhyme or reason with the State Government to resort to 100% reservation.

“It was least expected from the functionary like Government to act in aforesaid manner as they were bound by the dictum laid down by this Court in Indra Sawhney and other decisions holding that the limit of reservation not to exceed 50%.”

The bench unanimously held that the District Forum has no power to extend the time for filing the response to the complaint beyond the period of 15 days in addition to 30 days as is envisaged under Section 13 of the Consumer Protection Act, 1986.

The bench was answering the reference relating to the grant of time for filing response to a complaint under the provisions of the Consumer Protection Act, 1986 wherein the answers to the following questions were sought:

10. Accused under NDPS Act not entitled to acquittal as a blanket rule merely because the complainant is the investigating officer

The bench unanimously held that the accused under the Narcotic Drugs and Psychotropic Substances Act, 1985 (NDPS Act) is not entitled to an acquittal as a blanket rule merely because the complainant is the investigating officer.

11. State Government cannot fix the “minimum price” of sugarcane once Centre has already fixed it

By virtue of Entries 33 and 34 List III of seventh Schedule, both the Central Government as well as the State Government have the power to fix the price of sugarcane. The Court, however, clarified that

“it is always open for the State Government to fix the “advised price” which is always higher than the “minimum price”, in view of the relevant provisions of the Sugarcane (Control) Order, 1966, which has been issued in exercise of powers under Section 16 of the U.P. Sugarcane (Regulation of Supply and Purchase) Act, 1953.”