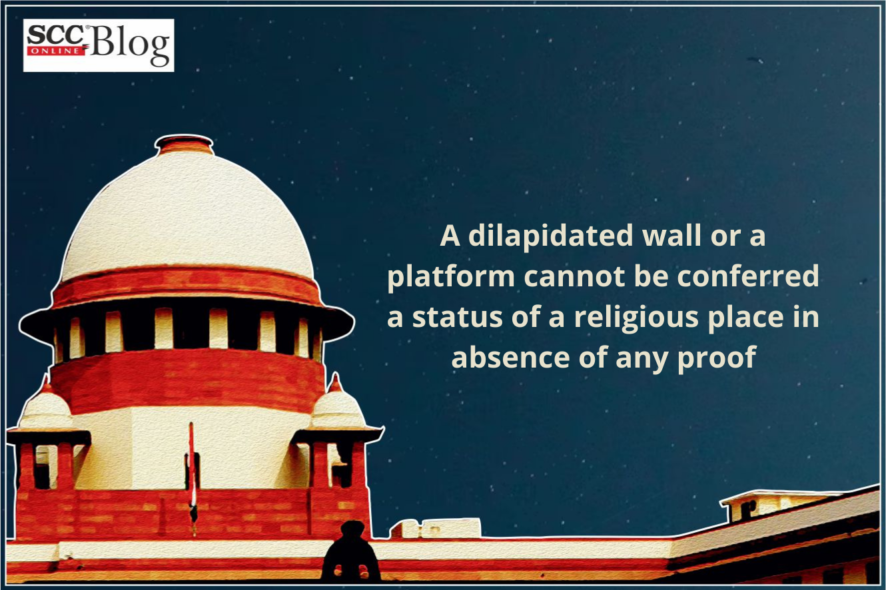 Supreme Court: The bench of Hemant Gupta* and V. Ramasubramanian, JJ has held that in the absence of any proof of dedication or user, a dilapidated wall or a platform cannot be conferred a status of a religious place for the purpose of offering prayers/Namaaz.

In the case at hand, Jindal Saw Limited was granted lease for the mining of Gold, Silver, Lead, Zinc, Copper, Iron, Cobalt, Nickle and associated minerals in District Bhilwara, Rajasthan.  However, the Waqf Board, Rajasthan challenged the removal of  the ‘Tiranga Ki Qalandari Masjid’ in Village Pur. It was argued that the area consisting of the platform over the Tiranga Hill should be saved from mining as it was a religious place as in olden times laborers used to offer prayers in Qalandari Masjid.

However, the elders of the village had informed that they have not seen anybody praying Namaaz nor there is access to water and stairs to reach the platform. It was noticed that the area is surrounded by vegetation and there is also nothing to suggest that the structure was ever used for offering prayers (Namaaz) as neither the area is accessible, nor there is any facility of Wazoo, which is stated to be an essential step before offering prayer.

Further, a perusal of the photographs shows that the structure is totally dilapidated without any roof and in fact a wall and some broken derelict platform exist at the spot. Also, the experts from the Archaeological Department reported that the structure has no historical or archaeological importance. Noticeably, the lands for graveyard and other religious structures have been excluded from the lease.

Hence, noticing that there was no proof that the structure had any religious value, the Court did not find any reason to interfere with the removal of the structure for mining purpose.

Utt HC | Reasons to record in a judgment are life of law and in absence, judgment cannot be said to be legal; Court allows appeal

Jhar HC | Employer is vested with discretion to condone suppression of fact, if the same does not render an incumbent unfit for the post