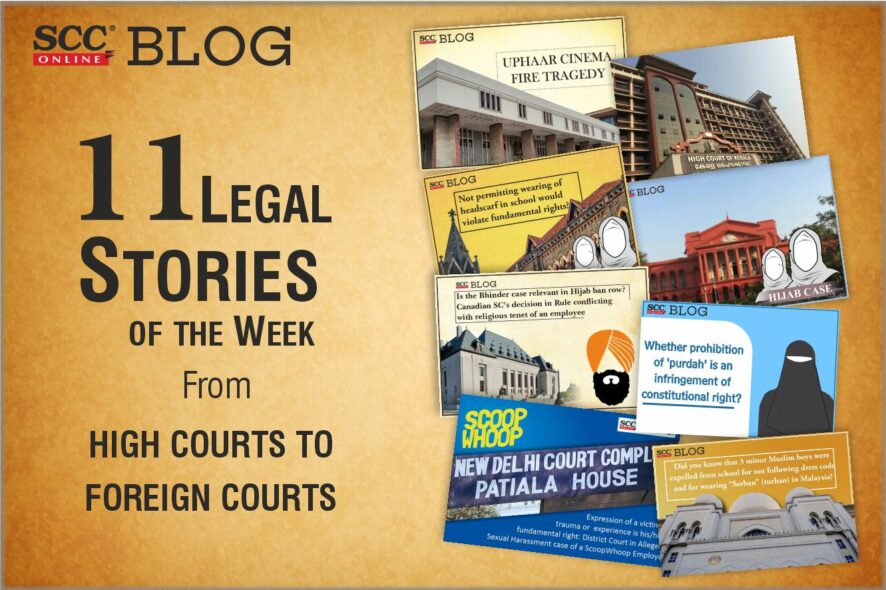 Let’s have a look at the most interesting legal stories reported this week on the SCC Online Blog from High Courts, Foreign Court to District Court.

In Nadha Raheem v. C.B.S.E,  2015 SCC OnLine Ker 21660, Kerala High Court’s Single Judge Bench in the year 2015 dealt with petitions by two female students belonging to the Muslim community contending that the dress code prescribed by the Central Board of Secondary Education (C.B.S.E) of wearing half sleeve kurta/salvar would prejudice them, as their religious custom mandates them to wear a headscarf and also full sleeve dresses.

In this case, a work rule was introduced, as per which all the employees had to wear a hard hat at a particular work site, but Bhinder a Sikh employee refused to comply with the said rule because his religion did not allow the wearing of headgear other than the turban.

Stating that the manner in which Court records tampered was insidious and revealed a well-planned and methodical attempt to subvert the justice system in order to escape conviction in the Main Uphaar Case, Subramonium Prasad, J., held that since the matter relates to tampering of judicial record, the same has to be decided expeditiously in order to ensure faith of the public in the judicial system.

If Court finds that marriage failed due to incompatibility, but one of the parties withholds consent for mutual separation, would that be ‘Cruelty’? Kerala HC elaborates

Expressing that, “If the conduct and character of one party causes misery and agony to the other spouse, the element of cruelty to the spouse would surface, justifying grant of divorce”, the Division bench of A. Muhamed Mustaque and Sophy Thomas, JJ., held that, Court cannot leave the life of a spouse to the mercy of the opposite spouse.

Teacher administering moderate and reasonable force to enforce discipline in classroom, can be exposed to criminal prosecution? Kerala HC answers

While explaining that inflicting corporal punishment on a Child by a parent or teacher is forbidden, Dr Kauser Edappagath, J., observed that,

“Hurt of a less serious crime is not forbidden when inflicted in the reasonable chastisement of a child by a parent or by a school teacher.”

While addressing a matter for an offence alleged under Cigarettes and Other Tobacco Products Act, Juvenile Justice Act and Kerala Police Act, Dr Kauser Edappagath, J., expressed that mere keeping tobacco at residence would not amount to being an offence.

Patiala House Court, while addressing the alleged case of sexual harassment against the CEO of ScoopWhoop, wherein it sought an interim injunction, Court expressed that,

Del HC | Interim relief against passing off. Is identical placement of colours and other features in label of product being passed off enough? HC decides